Peter Klamka, president of PKN Media, which is marketing the Claudia Schiffer Palm Vx, said they were expecting to sell "many tens of thousands" of them. After announcing the device last summer, they are finally available for sale on ClaudiaSchiffer.com and apparently demand is quite high. "It started out as sort of an interesting promotional idea and it's taken on a life of its own that far exceeds what everybody first thought," Klamka said. 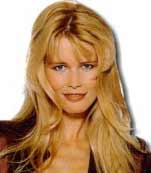 Ms. Schiffer is deliberately trying to get more women interested in the Palm platform. She said, "I hope by offering this color to women and also having the software that's women-oriented...that hopefully they'll have fun buying one and playing around with it. "

Not surprisingly a majority of interest in the aqua colored Palm Vx is from women, but not all. "There is a range of people buying the product, from professional women to men who are buying it as a gift," said Klamka.

According to Joe Laszlo, senior analyst at Jupiter Communications, getting more women interested in the Palm platform is exactly the sort of thing Palm needs to do. "Things that they can do that make Palms more appealing to women, even if they're more cosmetic changes, are probably good to broaden the [user base] that Palm has interested in its product, " said Laszlo.

You wouldn't think it would take almost six months for them to come out with what is a regular Palm Vx with a different colored case and some additional software but the Claudia Schiffer Palm was hit with the same problem Palm Inc. has suffered from for months: parts shortages. Palm simply couldn't get them any hardware to customize.

This isn't the end of Ms. Schiffer's foray into the high tech realm. In recent months Klamka's company has also talked about a private-label wireless ISP, modem sales on the Claudia Schiffer site, and site content specially designed for Palm devices.

The Claudia Schiffer Palm Vx is available exclusively on ClaudiaSchiffer.com. It sports a unique blue brushed metal case instead of the traditional silver color and comes preloaded with an image viewer, a diet log, a fitness tracker, a puzzle featuring images of Claudia, a currency and clothing converter, and shopping guides with Claudia's suggestions on stores in various cities. It sells for $400.

she is a babe

fleegle @ 1/12/2001 9:54:08 PM #
The reason you would want it is if you liked the device and the apps on it. Not because "whoever" is endorsing it. Is that why you buy things? Because somebody young and good-looking endorses it? You are a **very shallow** person.

So...if Ivanka Trump were selling a sack of horse crap you would be the first in line to buy it. Wouldn't you? Because she is a young supermodel.