Once again, handhelds and wireless devices took over the convention floor at the PC Expo. Generally, this years expo was a little more subdued than last year, with most of the dot coms out of the picture and IT firms tightening their belts. Though there werent many new earth shattering announcements or products, there was plenty of new and existing Palm accessories and solutions on display. Read on and take a look. 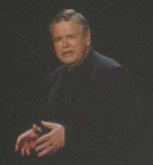 I started the day off attending Palm's CEO Carl Yankowskis keynote speech. He spoke on the numerous enterprise handheld solutions and benefits and the maturation of the handheld market. He also announced alliances and partnerships aimed at making the Palm Platform more attractive to corporate customers. Mr. Yankowski invited a few guest speakers onstage to demo new products and showcase solutions. The MoveIt! SDIO card from MotionSense was demoed. It combines memory with and accelerometer to allow you to tilt a palm forward/backward and right/left to navigate maps or control games. Panasonic showed off a new digital camera with an SD slot, that when inserted into a handheld, pictures taken on the camera would show up on the Palm. 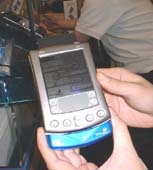 RealVision was showcasing their upcoming CarpeDiem GSM phone sled for the m500 series. The CarpeDiem enables dual-band GSM voice communication, e-mail, SMS, and mobile Internet connectivity. It is expected to start shipping in the fourth quarter for around US $400. Shown here is their prototype m500 PCMCIA adapter with a wireless card. The prototype was a bit bulky at over an inch and a half thick; however, the final product will be a slim half-inch. No word on price or availability just yet.

One of the most interesting devices I came across was being shown at the Sanyo Electronics booth. It's a Palm Powered handheld called the Sera that will only be available in Japan. It's essentially an m505 in a different casing with support for MP3's via a headphone jack and a wireless antenna for use on the NTT DoCoMo I-mode network. Sanyo was not showing off the devices but rather a secure wireless content authentication server for use with licensed material such as digital music files. I had a hard time getting my questions answered, as the rep did not speak too much English. I've tried searching the net for more info without luck. If anyone has any leads, please drop us a line. 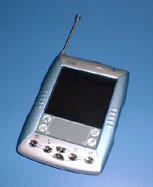 Matias Corporation had its Half keyboard Wearable Kit for Palm handhelds on display, which includes: a Wearable Half Keyboard, all necessary cables, wrist straps, and software. It will sell for for $300. It's rather interesting to see the keyboard in action. You type the left hand keys normally and you hold the spacebar down to switch the keys to the right hand ones. Both sets are labeled on the keys. They claim that after roughly 15 minutes of practice you can type up to 88% as on a full keyboard.

I walked on over to the Blue Nomad booth to check out a demo of WordSmith 2.0 running on an m505. Let me tell you their new FineType font technology is nothing short of amazing; it makes a huge difference in quality and ease of reading. I think this technology will position WordSmith as an excellent eBook reader as well. It not only makes the fonts much more smooth and clear but goes a long way to improve the appearance of italics and other forms of rich text.

After checking out the FineType I went over to the PocketPC booth to check out MS ClearType on an iPaq. Despite the standard 160 Palm resolution the new version of WordSmith was just as good, if not better than the MicroSoft ebook reader with similar technology.

A company called Electric Fuel has a new and interesting charger for rechargeable devices called Instant Power. It's a small little box, which is replaceable, with a cord that can charge a Palm, PocketPC device, or a cell phone. The box or PowerCartridge contains a zinc-air fuel cell that when exposed to atmosphere starts to oxidize thus recharging your device. Each PowerCartridge provides about twelve full recharges to a Palm or three full cell phone charges.

Delphi Automotive parked a Lexus in the middle of the Designed for Palm Handhelds Pavilion to show off the hands-free Communiport MPCpro system. The MPCpro features voice interaction with a Palm V/Vx handheld computer and Ericsson R280/1228 phone. Using your voice the system can look up and dial phone numbers, check and read back e-mail, news, weather and traffic information. It works off a standard auto auxiliary power outlet that can charge both the phone and Palm and relays sound through the car's speaker via a cassette adapter. 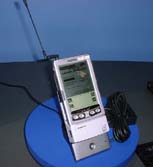 Here's a shot of the recently announced wireless modem for monochrome Cliés. The modem is quite bulky and adds considerable weight to and otherwise slim Clié. Service for the modem is called MYLO for MY Life Online. It will be available for unlimited access for $40 a month from GoAmerica. In a move that is sure to be controversial, the two companies are only releasing a wireless modem that fits the just announced PEG-S320 and the first-generation PEG-S300. At this time there is no way for the top-of-the-line PEG-N710C or PEG-N610C to use the service.

Here's a few pictures from around the show floor to leave you with.

EGarrido @ 6/27/2001 10:06:22 PM #
No, as far as I saw, there wasn't unfortunately. I was hoping for some info, in fact I was thinking about it on my train ride to the city. The speculation was that Carl Yankowski of Palm was going to say something about it in his keynote address, but that turned out to be false. He didn't mention any specifics on any future handheld.

Handspring was quiet as to new tech news and I don't recall seeing anything major as to new stuff in the booth.

I agree with Ryan that the show definitely seemed more dormant that it was last year. Economics really impact everything (Interesting to see some Marx's ideas at work). It was still a great show and if you have a chance to visit the Jacob Javitz center tomorrow (Thursday), the admission is worth it.

I.M. Anonymous @ 6/28/2001 12:13:38 AM #
They should time release something cool for a major event like this. Should be like when Bond goes to the old fart's laboratory to get outfitted with cool gear to see him through the movie unscathed. I looked at the pictures of the wrist keyboards, clipon phone sleds, cables, etc.. and I don't see anything more cool than my Kyocera 6035 Smartphone. (shameless plug)

Besides, he's the boss and if he wants to call it that, who am I to say different? ;-)

RE: TECHXNY vs. PC Expo

Just wondering, why didn't you go as well?

Anything on GPS and m50x?

Hopefully, that will change soon.

Product = Companion GPS
Tech_Question = Can you provide information on the availability of a GPS
Companion for the Palm M505 or M500? Will a GPS be released for these
products?

Yes we will have something available after the new year.

I.M. Anonymous @ 6/28/2001 7:44:06 AM #
I did see a demo of the PocketPyro mp3 player for the Palm Vx, it was using the Shinei MIDI case. The demo model had 256MB, rechargeable batteries, and could charge the Palm V from its batteries. It also functioned as a hotsync cradle for the Palm Vx and as expansion memory. They didn't have a booth, but they said they would be selling units from their website in a few weeks. Let's hope it's for real!! www.pocketpyro.com

I.M. Anonymous @ 6/30/2001 3:28:54 PM #
Shinei is the manufacturer and Pocket Pryo is supplying the technology together with Liquid
Audio. The portson mp3 player for m100 series will be out this July, as quoted by Shinei during the Exhibition.

I.M. Anonymous @ 6/28/2001 8:09:17 AM #
Is it just me or does that shot of Yankowski look like the Sith Lord the morning after a night of binge drinking? What's he doing with his hands? Did he drop his mask while trying to put it on? Not very complimentary.

Nah, he looks like a fat, completely-out-of-shape dork. We'll dub him Fat Vader.

I feel obliged to offer some advice: Don't wear all black ever again. Burn those clothes. You don't look good in them and, more importantly, it sends the wrong message.

CARL, IF YOU'RE SO DAMNED UPBEAT about Palm's prospects, why are you dressed like a big lump of coal? Where's the funeral?

Remember, we're still in philosopher Marshall McLuhan's age of "the medium is the message"--and your all-black combo of jacket, slacks, knit shirt, socks, and shoes was the wrong medium for your happy message. Or is there another, hidden disclosure? I'm thinking about the salesman who promises great service--while unconsciously shaking his head "no."

The hidden message in the keynote seems to be that Mr. Yankowski believes Palm is in as much trouble as everyone else thinks it is. Though his words and emotions were upbeat--well, as Billy Crystal (as Fernando) said, "It's not how you feel, it's how you look." And Carl, you didn't look mah-velous.

ten_iron @ 6/28/2001 7:10:12 PM #
Palm had a Bluetooth pod at the show. There they were showing Word and Excel printing from a PalmVx to a Bluetooth enabled HP printer. They also had a PalmVx web browsing through an Axis Bluetooth Local Access point. They showed some other cool demos between Palm's as well.

RE: half a keyboard?

What Questions Do You Readers Want Answered?!

I did not pay any attention to things like GSM because I have no personal interest. If I had known of your interest, I would have looked it up for you. Too late now. Sorry. Next year (or even next trade show -- is Internet World 2001 still on?).

I will also have an Expo report for the site in a few days.

I.M. Anonymous @ 6/30/2001 4:48:02 PM #
I don't see this happening. The kind of people who don't even spend a couple of hundred bucks for a Palm aren't the people likely to turn around and spend $40 a month on a wireless connection for it. I know, YOU would but a poll of m100 users wouldn't turn up very many others.

The m10x series is also a dead end. Palm won't make any more models shaped like that so it wouldn't pay the modem company to go to all the hassle.

Also from the site http://www.i-vox.com/clipmodem.htm

I.M. Anonymous @ 7/1/2001 1:28:38 PM #
I'm the guy who posted the second message in this thread. When I read my comments again it really sounded like I was ragging on the m100 series. I didn't really mean to. I think they are good first handhelds and all the Palm most people need. I just don't think there will be a lot of expensive peripherals for it.