Sony has officially announced the rumored SJ-33 model in Japan and Hong Kong. SonyStyle's U.S. site does not yet say anything about this new model. The information given on SonyStyle HK confirms most of what was rumored before. New features include, a integrated translucent flip cover, new button designs and an mp3 player.

The battery is a Lithium-ion polymer rechargeable internal battery. Sony rates the battery life at 17 days (Based on an average of 30 minutes use of PIMs per day, with the backlight off.) It will get roughly 10 hours of music playback with the display off, or 4 hours with it on. 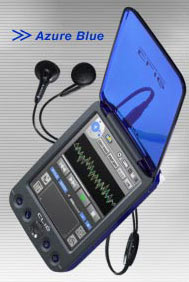 There has been no word of the rumored SJ22, rumors place that SJ22G as thinner and lighter than current SJ20G with a color screen.

More photos and information on the new models can be found at Sony Japan and SonyStyle HK. PIC will update this article when it is available for pre-order in the US. The database of a major US retailer claims the SJ33 will retail for $299 with an expected in-stock date of 2/28/2003.

Foo Fighter @ 1/27/2003 11:03:27 AM #
Looks like Sony is responding to low-cost PPCs by adding more advanced features (multimedia) to midrange hardware, which is a wise move. Sony knows that digital audio is no longer a "high-end" feature...it belongs in midrange devices now as well. At $299 this device should compete quite well with similarly equipped PDAs on the market.

Now my only question is; do I go with the graphite or Sapphire blue? ;-)

Foo Fighter @ 1/27/2003 11:18:09 AM #
Yeah, I would have preferred a price-point of $250, but at least this is a foot in the door. Right now it is imperative that more advanced features, like digital media, begin to migrate down to lower end devices. The current product line is a farking joke. SJ35 is just a stop-gap, but it's a start.

painted_dog @ 1/27/2003 12:51:49 PM #
I agree its a great device, but PPC is finally making serious inroads to the Palm domain, it used to be that Palms were very affordable, but now for $200 you can walk away w/ a nice Dell Axim X5 @ 300mhz. [this is of course not counting all the PPC OS issues] it really hit me when my friend was looking for a PDA for his girlfriend for christmas. he set his limit @ $200. & the Dell offered the biggest bang for the buck, color screen [16bit infact, not the 12bit m130 stuff], the ability to play MP3's, there really wasn't anything comparable in the palm version. I'm disappointed that Palm device are now the higher price tag item, i can see them becoming like macs [eventually, though that isn't the case right now] [also before everyone brands me as a PPC yahoo, be it known that i have an M125 & a Clie T615 & love them both & look to stay w/ Palm OS devices, but for the new comers, PPC makes a compelling lower to midrange arument] Just somethings to think about !

Yes, but that's for a PPC device. It has an OS that few use and even fewer like. If someone is upgrading to this unit, chances are they're coming from a Palm OS unit already. They'll pay a $50 premium for that.

If they haven't used a PDA before and they play with this and the HP unit in the store, I'll bet I know which one 8 out 10 people are going to go the checkout counter with.

xolstis @ 1/27/2003 6:08:14 PM #
Yes sony does seem to have a tendency to make their stuff rather pricey. And with DELL now in the Arena on the PPC side, the price wars don't look too good for the palm side of things.

Sony has just upgraded the S series so the T665 will probably be phased out sometime soon considering the rate at which Sony pumps out new devices(Go Sony). Hopefully the next T model will use OS5?

Fzara2000 @ 1/27/2003 8:53:49 PM #
You should definitely understand that the price wars in the PPC camp arent hurting the Palm OS sales as much as they are hurting the PPC sales of other manufacturers.

Actually it's the exact opposite. Palm is following the road of the IBM PC (first to market, leader in market share, cheaper low end hardware such as the Zire, lots of applications), while the PPC family is late to the market, trying to catch up from behind, strong only in specialty niches, and with a higher average purchase price.

The 16Mb barrier no longer exists for Palm OS... they are just following their typical pattern of releasing a device, then releasing an upgraded version with more RAM.

quengho @ 1/28/2003 3:24:16 PM #
1. Sony doesn't need to "stab at" the Pocket PC. Sony's handheld market share is on a par with *all* the Pocket PC market share in the US (and has been frequently higher... I thought it was still higher until Foo up there corrected me) and it's rapidly heading towards parity in the rest of the world. The h1910 is a stab at Sony from the Pocket PC world.

2. The available address space in a Dragonball VZ or Super-VZ is 128M, of which a maximum of 16M can be in any one "bank". The VZ also provides refresh for a maximum of 16M DRAM. You can go over 16M with multiple banks by making all but one of the banks static, flash, or smart DRAM with its own controller. For example, a Visor Pro can go up to 32M directly addressed memory with 16M RAM and 16M flash.

What I think Sony should do to finagle the 16M 68000 bank problem on their high-end units is give them separate banks for the heap and the store, that way they could have (say) 8M split between heap and their special apps (the ones that eat up 5M on the NX models) plus a whole 16M of store all for the user.

xolstis @ 1/28/2003 4:22:41 PM #
Fzara2000 wrote:
You should definitely understand that the price wars in the PPC camp arent hurting the Palm OS sales as much as they are hurting the PPC sales of other manufacturers.

You;re probably right there, the AXIM probably has got the ppl up at HP more worried than those at palm and sony. But still, one must admit new users coming to the world of PDAs will be very tempted to compare the ARM processors and 64MB of RAM which are the standard of most PPCs as compared to those of palm. Of course WE ALL KNOW that 64MB and a 200MHz ARM is very much comparable to a 66MHz Dragonball with 16MBs or RAM on a palm, but new users? True there are now ARM processors on palms but its so far limited to just 2 models if I'm not wrong.

Think the zire was a good move by palm for my part. Of course I personally think its a joke having used other devices before, but its a good attempt to capture the hearts(and pockets) of new users....and chances are their next upgrade will be a higher end Palm and not a PPC = ).

Yet another OS 4 device?

The Headphone outlet is placed at the top of the device which is a minor annoyance with the t665 that I have being on the side.

I can't tell, but the up down rocker looks like a D-Pad in other pictures I've seen.

The battery life is VERY much improved and this is a big deal, that is the largest complaint I have about the t665 is that I must continually charge it.

the up and down scroll buttons are half circles and the middle is a power light.

this paste is from brighthand. Its heavier then you guys thought.

May the Palm os be with you

Uh, did you ever think that Brighthand may be incorrect? (7.8oz = 221g) I'd sure put more trust in the specs direct from Sony...