EruWare has released a Compact Flash Storage Card Driver for the Sony Clie. This driver enables Clie models PEG-NX60, PEG-NX70V, and PEG-NZ90 to use the CompactFlash slot with standard CF memory.

The new driver allows most CF memory cards to be used in the models with the CF slot, which was previously only used for the Sony Wireless Expansion card. CF cards from 2 MB to 1 GB can now be used with the PEG-NX60, PEG-NX70V, and PEG-NZ90 models. 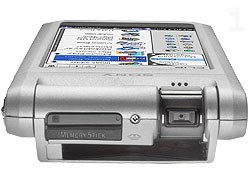 A utility program is provided with the driver that allows users to auto-mount cards (making the functioning of the CF cards as transparent as Memory Sticks). This utility also allows users to make the CompactFlash slot behave as though it were the MemoryStick slot on the Clie, thereby allowing access to selected built-in applications such as Audio Player and Movie Player.

EruWare plans to continue to add features to the driver as well as to the utility. All purchasers of the driver are entitled to free lifetime upgrades of the driver. The driver is priced at US $27.00 and is available now.

To go beyond 128MB, they had to change the MemoryStick interface. It looks the same, but works differently, and requires slightly different hardware talking to the memory stick. The NX and NZ's can talk to the new sticks because they already have the new controllers.

jbeedham @ 4/22/2003 8:42:07 PM #
Here is the answer. SD Memory has the controller built into the card. So there is no limit to how much memory they can fit in an SD card. Now as for memory sticks, including memory stick pro, the controller is not built into the card. So the cards are limited by what the controllers in the units can do. Memory Stick maxes at 128 MB and I believe Memory Stick Pro maxes around 30 GB. While 30 GB's may seem like a lot now, I bet you will hear people complaining in 10 years how that is not enough. Because of that I will not invest any money into Memory Sticks.

I assume by the *GRIN* you understand that for the cost of one of these Sony devices and a 1GB CF card you could've easily bought a laptop with many GB to spare and probably longer battery life to boot.

I know I can buy a Laptop for $1200 with a 20gig HD, but thats not the point. The point is there is no case I can buy that straps the laptop comfortably to my leg so I can take it anywhere. Laptops just arent as portable ... sure you can take it with you. BUT ... as for laptop size you would not take it on small errands to the store, or a small errand to the office or when you go to the park to walk around.

Several times I have found the need for my PDA at the park. Seeing an old friend to exchange notes and phone numbers .. or when I need notes for anything. You cant whip out your laptop, go to the application and take notes in under 5 seconds while strolling at the mall now can you?

aerofault @ 4/22/2003 11:35:46 AM #
This is a ****ingly fantastic achievement and a nice little mark on Clie users' score card. Now you can have 2 GB of storage on your device! Hopefully support for Kinoma is in the works; it would be great to have an entire near-DVD quality widescreen movie (or two, or three!) with you on those long, boring Amtrak rides >:)

Token User @ 4/22/2003 11:52:15 AM #
FWIW - I was a beta tester, and happily run Kinoma encoded files from my 1GB Microdrive 8^). The Microdrive is not the fastest CF Memory option out there, but I have not detected any lag in reading movie files from the device.

One caveat is that the Microdrive consumes 10x the power of a CF Memory option, so the battery time is reduced as well. Thats just the nature of the beast. There are soid state memory options which comsume less power and push the 1GB envelope as well.

I was a naysayer

Dropped by $27 and I've already received the registration code. This driver works **perfectly**.

I'm curious - anyone try this driver with the camera yet? Can the photo application use CF cards to save the pics instead of MS?

I wonder if this works with CF adapters for other formats - like CF to MMC, etc. Or if they would require further development.

They actually tested an adapter and found it to have worked. Go check out the list on the website. Dunno if it was MMC or not, but I remember seeing one.

little-man @ 4/26/2003 3:47:32 PM #
I'm fairly sure it would work with the camera, especially if you put it in masquerading mode. As for CF to other memory adaptors, I know that a CF to SD adaptor has been tested and works. I don't think any others have been tested yet, but I don't see why they wouldn't work.

rjen @ 4/24/2003 7:43:24 AM #
As EruWare notes, applications must have "multi-volume" support to access data files through the driver. Can someone start a web page with lists of programs that:

* Work (note that any application that has no data files should work, so don't bother listing those)

* Work but with problems

(Any application that used VFS code based on Palm's sample source code should have a good chance of working. That's what I used in my freeware and shareware applications <http://www.rjen.com>, and they work great.)

I'll start the lists with what I have on my NX70V (everything else I have either has no data files or doesn't work with the memory stick either):

Insidetrack @ 10/19/2003 1:57:05 PM #
I see there is a not so new kid in town. Amir Yasin (formerly of Eruware) has written and is selling a driver on Handango called CF Magic. It looks targeted to be out there for people that haven't bought the Eruware driver and don't want to use the questionable "hacked" drivers that are available. Anyone reviewing it?

what hardware do I use?

adove @ 10/19/2004 3:39:46 PM #
I am extremely interested in this product, but I still need some hardware accessory to install/insert CF media in my Clie'. I use a PEG-NX70V/U Clie'. Please let me know what I need in order to use Compact Flash with my Clie' AND where I can buy it. Thank you.