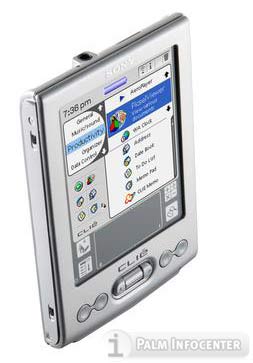 Both models feature a slim design reminiscent of the former T600 series handhelds. They both have dimensions of 4/38" x 3" x 15/32 inches and weigh in at 4.9 ounces. Both include a new Center Jog Dial navigator, that has 4-way directional movement. They are powered by a internal Lithium-ion poly battery and have Memory Stick pro expansion.

Both are available for pre-order now from SonyStyle, and are expected to be available later this month.

Clie is no longer cheaper than Palm

Personally, with the advancements to the PIM apps and the Documents to Go that the T|E has, I see it as an easy choice.

Any other notable differences?

IMHO, Sony has yet to offer a screen as nice as the ones on the current Palms. Plus the one on the UX-50 was a huge step backwards. It'll interesting to see what the screen is like on these new models.

dhchung @ 10/1/2003 5:19:53 PM #
Well, in terms of software, I think sony actually offers much more than palm although sony doesn't have doc2go
I also won't say $30 rebate is real decrease in MSRP. MSRP is the most expensive price you need to pay. Usually, ppl can buy things lower that that price anyway.

The SJ35 seems to include the standard T-connector for keyboards and cradles. The T|E does not. How valuable is a standard connector and a 50% faster CPU, versus 6 MB more storage memory and Documents-to-Go Pro, to a power user?

"Size" is deceptive in one area ... the T|E has that Vx hourglass figure which means better handling and actually a little thinner in real size. T|E will work with Mac outta the box. Sony "d-pad" value reamins to be seen, although the T\E is getting cheezy reviews on their d-pad. Most importantly, the TJ does not yet "exist" and the T\E is on the shelf at Best Buy.

The Ugly Truth @ 10/2/2003 4:10:53 AM #
These two models should be considered the last of the beta hardware that Sony has been selling to consumers over the past three years. Those of you who participated by buying these models should be thanked for your participation. You were all brave pioneers that paved the way for the real PDAs that are to follow. Well done.

Actually, this is true for the purchaser of any consumer digital technology or software product for the last half-century or so. If you buy a copy of Windows, a Pentium laptop, digital camera, video game, music player, cell phone, etc., you are just beta testing for what comes next.

If you are in college, your new Sony PDA can be, by some measures, faster than a few of the multi-million dollar machines that would have made the top-500 supercomputers list when you were an infant. And before your kids are in college, your hottest new PC may be in a museum somewhere.

Cheap Guy @ 10/3/2003 8:41:12 PM #
Actually, I kind of hope Ugly is right and Sony comes out with a standard Clie in the near future. It seems that after the T-Series, Sony has been wandering around, trying to innovate, experiment and distinguishing themselves from other PDA makers. While this is normally a good thing, it seems like they've been tossing out too much good, e.g., metal cases, hi-po IR, and now the side-mount jog dial, replacing them with features that are somewhat questionable, e.g., flip screens, keyboards, etc., just for the sake of being different. Plus they've ventured into laptop land as far as prices are concerned. For the life of me, I can't understand why Sony doesn't come out with a TG50 model without the keyboard. Keeping the high-priced flip models and the new low priced TJ's would be fine, but at least give mid-range buyers a "normal" alternative to the Tungsten series.

Sony has basically been marketing design experiments to see what works/sells. The basic configuration people have begged for for so long will be out soon. But stand alone PDAs are a dead end market. Sony needs to get Palm OS onto their Sony-Ericcson cell phones now. They will continue to cover other niches with products like the CLIE PalmTops (UX-50) and other stand alone PDAs, but that market will shrink within a year as more PDA-phones are rolled out. Geeks here tend to not understand that most "normal" people will want to carry a single small device rather than toting multiple items on a utility belt. If you look at how 95+% of PDA users actually use their devices, you'll understand why a PDA-phone like the Treo 600 will make stand alone PDAs obsolete. For the less than 5% of users that really need the bigger screens offered on stand alones, there will still be those niche devices.

Accept it: PDA-phones are the future, whether you like it or not, kiddies.

Gar @ 10/1/2003 1:11:00 PM #
Aren't these the units Sony was showing last week in Japan in all kinds of case colors? Will we get those here? No, I wont be buying one just for the color of the unit but that might put a few students over the fence to a TJ instead of a Zire. Why else did Palm make the 71 blue?!

RE: Where's the colors?

RE: Metal or Plastic?

RE: Metal or Plastic?

So many people were after an OS5.0 Clie in a slim form factor without keyboard/camera that I reckon these are gonna sell pretty well...

mikecane @ 10/1/2003 7:38:35 PM #
"CLIÉ Compact Keyboard
PEGA-KB100
The new Compact Keyboard, PEGA-KB100 is available in a sleek silver metal finish. It offers the touch and feel of a full-size keyboard, yet light enough to carry anywhere."

Other than that, it looks nice. Is anyone here using one? Is it possible to touch-type?

I want my Decuma Latin!!

And NOT on a CLIE!

also, ganoe, could you *please* tell me what's wrong with Clie's screens? i would really like to know. are they too small? or what? and what's so horribly wrong with UX-50's screen? thanks in advance.

kidA @ 10/1/2003 9:18:43 PM #
probably wasn't supposed to be uploaded yet. it's obviously a draft. probably made by the marketing folks then sent to the clie management people for editing and confirmation that it's all right. then the management people made their notes as to what needed to be fixed, and sent it back to get updated and somewhere along the way it accidentally got uploaded. i wouldn't knock anyone for this. and it's very professional looking document. it's just not done yet.

Size-wise most of the current Clie models are fine to great, its something in the design and technology. All of the recent Palm's (since the Zire 71 and Tungsten C) which if your goal is to have it similar to writing on paper, they IMHO come the closest yet. They're also rather usable in the lowest backlight settings, which is nice if you want to conserve power. In comparison, the Sony screens are ... well just screens. That's not to say that some of them aren't pretty nice.

> and what's so horribly wrong with UX-50's screen?

Small and dim. See comments from various people in the UX-50 review on this site, but small and dim about covers it. It's disappointing, because otherwise it's a really cool device. Given the rather large borders around the screen, I'm at a loss as to why they didn't make it bigger. Since the UX-50 was their latest, I'd be hesitant to jump on these new models till I physically saw how they compare.

The differences between color screens on all the different PDA models really deserve to be seen in person before you buy.

You're preaching to the choir. I keep trying to edit the temperature higher, and it's still cold.

A bit late in the game

M3wThr33 @ 10/2/2003 2:47:33 PM #
Okay, so last time when I made the point about them trying to mimic the Zire71, they TRIED and missed by 9 yards. NOW they successfully made a device that appeals to mid-range users, although the Zire71 will keep it's edge for two reasons:
1) The Zire71 has a camera. While not the BEST camera, it's still mighty good, can save straight to the SD card and is just overall cool looking when you use it.
2) The Sony engineers are still learnings. The new devices now look like industrial blocks. If you want the core people to accept them, you have to make them look inviting, rather than cold. What happened to the gunmetal-finish on the NZ90?

While a finish may sound superficial, it often is the first thing that draws a person to a display.

Oh, and they have yet to make a non-flip virtual-graffiti pda yet. Too bad no one is listening, how are those iQues, anyway?

The Memory Stick Scheme bothers me the most

vesther @ 11/5/2003 9:09:59 PM #
They seem to be impressive handhelds for the Business-Savvy Guru, but the fact that you need to use the Memory Stick as the sole expansion means for this handheld tends to be a real turn-off for a lot of people. IMO Sony is more of a high-end Palm OS Licensee than a multi-segment handheld creator.