UPDATED Crimson Fire Entertainment recently announced plans to release a Nintendo Gameboy, GBC and Gameboy Advance emulator for the Tapwave Zodiac platforms. The release has now been indefinately postponed due to legal threats brought against the company by the Nintendo Corporation.

The first release of the Firestorm gbaZ emulator was set for public release today. The program would allow users to play copies of Gamby Advance, Color and original titles on the Zodiac. 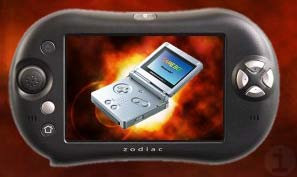 One day prior to release, project leader Kyle Poole received a letter from Nintendo of America's lawyers. Nintendo has requested that the Crimson Fire immediately cease promoting and releasing the planned emulator. Nintendo own patent, trademarks and copyrights in its GameBoy family of video game systems and technology.

Nintendo was also recently awarded a US Patent (6,672,963), which relates to software emulation of a handheld video game system. This patent effectively makes any unauthorized Nintendo emulator illegal in the United States.

At the moment, the release of the Firestorm emulator has been indefinitely postponed while Crimson Fire consults with a lawyer. The company had been accepting pre-orders for the title and will refund them if a release is not possible.

UPDATE:
Crimson Fire has announced they will not allow the legal threat to stop them from releasing the emulator. The company believes that the US patent does not apply to their software title. The group will release the emulator early next week as a free open source project, covered by the GPL license. The emulator will be made available along with the full program source code.

I'm dying to try it out, though.

Nate @ 3/12/2004 12:39:14 PM #
Nintendo's wielding a big stick on this one with their patent on emulators, which I can't help but think is bogus. If someone could come up with the money to challenge it, I would think it would be thrown out pretty quickly.

Emulators have a history of being viewed as legitimate "backwards engineering" of a product that is completely protected. It's the ROMs that are the copyright violation. But that doesn't stop big companies like Nintendo and Sony driving out the smaller companies with bogus lawsuits -- as evidenced by the rise and fall of Bleem a few years ago. That software was a mediocre Playstation emulator for PC, but even though I think they won a few rounds of the lawsuits brought by Sony, ultimately it was just too expensive for them to fight it and they went out of business.

Alric @ 3/12/2004 5:07:06 PM #
There was a great PS1 emulator for the Mac made by Connectix. Sony ended up buying the software from Connectix since they couldn't make a court case stick.

And a lawyer too

Emulators should be free.

Krhainos @ 3/13/2004 1:00:37 PM #
I don't exactly understand why Nintendo, or even any company that does console hardware gets all antsy-pantsy about emulators, since the emulators essentially replace the hardware (the console itself) -- I thought they made their profits from the software/games they sell rather than the hardware. Hell, Microsoft makes the XBox at a loss. If anything, they're basically selling* more software/games without losing money build/sell-ing the consoles.

RhinoSteve @ 3/13/2004 2:37:11 PM #
It comes down to to simple words: content control. Nintento is very strict on title publishing on their platform and there is a big fear or perception. You see a game running on an emulator and someone comes by and doesn't see the "Nintendo" name on the hardware, it is not a "Nintendo" game.

Also, on a business end. Any game that can be written on a GameBoy can also be done on a Palm. Consider open ended handhelds like a Vaudeville of gaming. That is, anyone can get up and perform. You do good and the big boys take notice. When you make it to Broadway and in a more exclusive scene (i.e. the high volume, closed gaming systems.) Just remember to copyright your works right and keep the socialists away from stealing your creation.

This has been done in the desktop many time with several title making it to PlayStation and XBox on the second revision after a proven fan base on desktops was shown. I see the same happening with handhelds.

Mandroid @ 3/13/2004 9:40:18 PM #
Khrainos, that's the rub really. If a bunch of non-console owning people actually bought games to play on emulators, you probably wouldn't see as big a deal made out of it. The reality is though that by and large, that isn't the case (especially since you need to usually have special hardware to get a ROM off of a cartridge, and even things that use CD-ROMs and DVD-ROMs generally are used the same way).

I just mean to say, most of the people who get a GBA emulator, for example, aren't also going to be spending a bunch of money to buy GBA games and then buy their own flash device to download the ROM from the cartridge to whatever they are going to run the emulator on.

Oh me oh my

I hope Nintendo goes to PalmSource and asks to license the software because frankly, Nintendo needs some form of wireless culture in them because they are losing a customer base for not following wireless and/or online trends. If Nintendo licenses Palm OS, whether Cobalt or Garnet, then Nintendo should really invent a GameBoy/Handheld Combo so that Nintendo can finally get out of their obsolescense damnation since their Super Nintendo days.

For now, I just want Nintendo to license Palm OS, utilize either Garnet or Cobalt, and make a GameBoy/PDA Combo so that Nintendo can keep up with technology.

JonathanChoo @ 3/14/2004 7:06:22 AM #
It might be nice to have Nintendo as a PalmOS licensee creating a real PalmOS gaming machine but you see consoles are created to last 2 years. By moving to the PalmOS platform where the hardware improves every few months, game developers will sometimes optimized their games to run on faster machines thus locking out older machines. This is evident on all consoles like Playstation2 and GameCube. And no kid is going to pay $400 to play games. And Nintendo won't subsidesed the machine because the games thereotically could be played on other PalmOS PDAs as well with a little bit of software hacking. Where will Nintendo's coffers come from then?

Emulators on every machine in a risky business. Not to mention the flood of piracy it will cause. Frankly, designing emulators seems to be a huge task and the programmers are evidently very talented. They should use their talent instead to design and create cool games.