Sony Electronics has announced a expanded range of Memory Stick PRO media that offers higher capacities and higher-speed read and write capabilities. The new sticks are compatible with a vast array of current Memory Stick PRO devices including Clie handhelds.

The updated Memory Stick PRO (High Speed) media features capacities of up to 2GB in the standard-size media and 1GB in the Memory Stick PRO Duo media size and are designed to support both read and write speeds of up to 80Mbps (10MB/s.). Among the fastest in the flash media industry, this higher speed will be especially beneficial for transferring data-intensive images, such as high-resolution digital photos, to and from PCs and other devices that may incorporate a high-speed parallel data transfer interface in the future.

"With the introduction of this faster speed Memory Stick PRO media, we are preparing for the development of new applications and devices that will demand high reading and writing speeds," said Mike Kahn, senior product manager of digital imaging accessories for Sony Electronics. "Higher quality, more data-intensive video capture might be one such application, but engineers now have the latitude to dream up even more."

The high-performance media also offers greater reliability in extreme temperatures with an improved operating temperature range of -13°F to 185°F. Whether your Memory Stick PRO media is in your backpack on the ski slopes or in the trunk of your car on a hot summer day, you can trust your media will perform as expected. Sony will offer this expanded reliability on all Memory Stick PRO media beginning this fall. 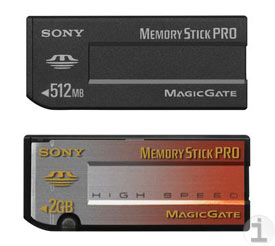 Mouarglagla @ 8/24/2004 5:49:43 PM #
I lost interest in Memory Sticks since Sony gave up Clié handhelds. Perhaps such capacity could be usefull for sony's future portable video player ?

And the Duo is still used on high end Sony Ericsson mobile phones.

ackmondual @ 8/24/2004 11:51:44 PM #
Don't forget the new PSP coming out. I doubt they'll release blank Universal Media Discs and their writer/reader drives for PC for ppl to write music/pics/video to it, so ppl who buy that gaming handheld will probably have to rely on MS Pro media. I hope Ebay or Pricegrabber churns out better deal than the what i'm guessing are MSRP. SD cards are still cheaper than those prices, (though lacking in the 2GB capacity).

I am a tad jelous in where my Z71 coupled with a 512MB Sandisk SD card (nearly maxed out) takes about 4.5 seconds to bring up the launcher screen where about 40MB of files and apps are. Rest of it being music, docs, and vid clips

I thought the UMD is basically the same as the new relaunched MiniDisc with 1Gb capacity? It makes more sense to release UMDs as rewritables because MDs were like that once.

I expect to see Sony releasing decks with DVD to UMD functionality just like their CD to MD decks in order to make everything PC free. Unlike many here I love the MD format. The battery life on portables are really awesome reaching more than 24 hours of continuous usage although it has moving parts. And I don't have to worry about dropping it and damaging any fragile harddrives. I can fit four albums in one with similar quality to 64kbps WMA9 - it won't beat a Rio Karma in terms of capacity but it sure beats most of the 128Mb flash sticks out there.

Anybody who thinks that Memory Stick will die because there are no more Clie is kidding themself. The flash format war is just beginning to take charge. And the market where the war is taking place is the mobile phone and digital camera sector.

About the slow launcher, are you using the default Z71 launcher? If so - it is slow because it does not cache the icon unlike third party launchers like zLauncher or SilverScreen. It works the same way as PPC's idiotic launcher system where everytime (after reset) it would take me minutes just to cache my icons.

The SD Card Association says: "SD Memory Cards are currently available in several capacities, and new 2, 4 and 8GB cards are on the way."

But, you know what they say about "vaporware." :-)

Is this a Joke?

ray00pal @ 8/24/2004 6:22:09 PM #
Why is this a joke? Because even with the previous memory stick pro, there has been no application that I know of use the previous high speed transfer feature. So what they up the speed to 80Mb/s! Why would anyone pay for it?

Indeed, due to lack of the possibility to verify the speed, why don't they just say the speed is 10GB/s?

tthiel @ 8/24/2004 9:02:04 PM #
How many digital cameras besides Sony use Memory stick? Any? I'm sure Sony has lost alot of digital camera sales because they force people to use memory stick. Noone who knows anything wants a proprietary media.

I would like to see more speed in Memory sticks for my Sony dig cameras.

JonathanChoo @ 8/25/2004 3:57:41 AM #
Some Konica Minolta DiMAGE digicams contains dual slots for use of either SD or MS. The G600 for example contains two slots so its possible to use both SD and MS.

hkklife @ 8/25/2004 9:03:57 AM #
Samsung uses MS in some digicams and its camcorders for still image capture. Konica/Minolta has the "G" line of dual slot digicams. It's just for SD/MMC and regular Memory Sticks (no pros!) though.
Some Samsung DVD players have MS slots on them for jpeg viewing. Other than that, it's entirely a Sony-centric format.

Sony really blew it when they started having the MS, MS Duo, MS Pro, MS Pro Duo & MS Select divide two years or so ago. When the original MS launched, Sony promised high speeds and large capacities but original MS stagnated at 128mb (or 128mbx2) and then they came out with a "revised" format that was incompatible with 99% of the existing MS line. Disgusting!

At least you can still use a new SD card of pretty much any capacity in any SD device. IMHO, the market should just shake down to CF, SD and one of the new tiny formats (xD, TF).

--
"I'm not a cool person in real life, but I play one on the Internet".
Galley

hkklife @ 8/25/2004 11:37:05 AM #
In all seriousness, had the PS2 been MS AND PSone memory card-enabled at launch, Sony would be sitting high'n mighty right now. Sony Computer Entertainment & Sony Electronics & Sony Computer are 3 separate divisions and seem to feud constantly over sharing technologies. For the PS2 to have a Firewire & USB port (IIRC, the latest PS2 revision dropped the firewire port) the but not a MS slot was just absolute foolishness on behalf of all Sony divisions. I personally play my PS2 less than I used to because my 2 memory cards are full of saved game & rosters and I don't care to swap cards back and forth trying to find where a certain game's data is. In this day of $100 1gb SD cards, it's inexcusable for the game consoles to stick to proprietary technology. I'd expect at least one next-gen console to use a "open" format of flash storage. Gamecube was rumored to have a SD adapter in the works from Panasonic but I never heard anything more on it.

They are no longer a contender in the flash memory, unless you are unfortunate enough to have a propriatary filled Sony product and you never have to call them for support.

I have a SJ33 and SJ30, my first non-palms and on their support and concern about the customer is terrible on the Clies.

Make sure if you get any device that uses flash, that it is supported by a consodium of vendors, not one that is trying to control everything like Sony.

Although you did ask what SF means.

benixau @ 8/27/2004 10:26:00 AM #
Sorry to burst your bubble but I called Clie Support in Australia not that long ago. They solved my problem first time round even though my warranty was a US warranty and it was a UX40 (never sold here in oz).

Trouble - never had any with Sony - just Palm-one