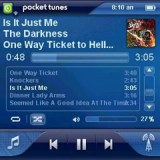 NormSoft has just released a new version of its popular Pocket Tunes music player. Version 5.0 for Palm OS and Windows Mobile adds a lot of new features along with a slew of bug fixes, including podcast subscriptions, Last.fm scrobbling, iTunes sync and WMA Internet radio. New users can purchase the bundle for $37.95, while users upgrading from versions 3 or 4 will be charged $19.95.

PalmInfocenter will take a more detailed look at the changes in the coming days. In the meantime, hit the jump for the full list of version updates.

Readers can also check out our earlier review of Pocket Tunes v4.

I like the new features but the iTunes sync conduit only will sync a max 4GB worth of music. I have an 8GB card and was quite frustrated by this limitation that apps like mOcean don't even have.