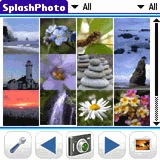 SplashData has released an update for its SplashPhoto application for Palm OS devices. SplashPhoto is a robust and feature packed photo management utility. The latest version includes a new more finger friendly UI and the ability to share photos on the web with Picasa, Flickr, and Facebook. This new update fixes some minor issues in v5.0 and improves performance with larger photo albums.

SplashPhoto v5.03 is available now with a free trial period. It costs $29.95 for the full version. It is available for Palm OS 4.0 and later as well as Windows Mobile devices. Desktop synchronization apps are available for both WIndows and Mac OS computers.