There has been lots of activity lately for video game emulation on the PalmOS 5 platform. Chris Hurley brings us news of new improvements to PalmMAME, ZodMAME, FrodoZ (a C64 emu), and Little John Palm OS a multi-system emulator which emulates the following systems: NES, SNES, Gameboy and GBC, NeoGeo Pocket, the Sega Master System and Sega GameGear.

PalmMAME
As mentioned previously on PIC, a port of the Multi-Arcade Machine Emulator, PalmMAME was recently released. MAME is an open source multiple arcade machine emulator that runs hundreds of classic arcade games. It has been updated recently with screen scaling and improved sound and works quite well on faster ARM palms. PalmMAME is available here. (the newest version is linked inside the discussion area- the front page may have a link to an older version).

The ZodMAME fork/port of PalmMAME gives Tapwave Zodiac owners dramatic performance improvements over PalmMAME, thanks to heavy optimizations for the ATI Imageon video chip. Although the Zodiac has a slower processor than many newer Palms, these optimizations makes most games significantly faster under ZodMame than they are on a T3 under PalmMAME. Sound is also much improved. Although not all of the games that PalmMAME supports are supported by ZodMAME, the two co-exist on the same device quite peacefully.

Zodiac owners can also check out the FrodoZ Commodore-64 Emulator. 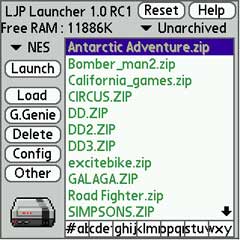 Little John Palm OS
Last but not least, LittleJohn for Palm OS (and Zodiac) devices is nearing a 1.0 release, with two release candidates appearing recently. LJP includes emulation modules for a variety of home systems, including the recent addition of GameGear, SMS and Atari VCS consoles.

While LJP can be unstable in some cases, it packs a lot of emulation punch into one download. Zodiac owners will appreciate that LJP is now almost as good as its ancestor LJZ in some ways and better in others. Its not quite time to delete LJZ, but LJP is finally worth a try for Zodiac users.

Thanks to Chris Hurley for the news

A few more links. (Some are to my on site, so take with salt as I'm evidently spamming) (Okay, I'm also tired out and staring at a web browser..)

Theres a good (though out of date) tutorial for emulation on the PalmSource site; so chekc it out here:

LJP takes over for a number of other emus (LJZ, GuineaPig, etc) is The Stuff. Kudos to yoyo for LJZ and starting LJP and Tinnus for keeping it goinmg during the lean summer months.

For devs, LJP does prove to be an easier way to make PNO (ARM) apps without knowing too too much about it.. so without going full into pno-dev-forum to figure it out, you can start with parts of LJP pretty easily. (Though it does need CodeWarrior9.3)

Someone make a DOS EMULATOR!

I wish there was a DOS emulator. There are many great DOS classics that i wish i could run on the Palm. Not to mention running Qbasic, but that's off topic.

There is, but not for PalmOS:

There's also PocketDOS, but DOSbox is better, and free.

DOSBox has fairly steep runtime requirements; it probably has lots of room for optimization, but thats real work.. so a quick port likely wouldn't work out really well. ie: DOSBox on a 600MHz Pocket PC isn't really fast but is workable (nor is it fast a equivalent desktop PC). So its not going to work out nicely for a Treo 650 or the current round of Palm OS PDAs (400MHz being the cap, though some you can overclock to 500 or more.)

Disclaimer: This is not what you are looking for! I know that. Please don't tell me about how it can't do what you wanted it to. I know that too. I am only posting this for future reference and possibly it is of interest to "someone".

LJP does Tg16 already.. same code thats in GuineaPig. If it doesnt' like you.. theres GuineaPig.

The best TG16 emulation on Palm OS is Dream Engine however; its shareware and worth every penny, just for Parodius ;)

Little John's TG16 emulation doesn't seem to be active on 1.0RC2, anyway thanks for pointing me to the other emus! They look great.. currently downloading :)