A new Palm OS smartphone is now on sale in China. The XPRO P368 is a GSM clamshell smartphone that runs Palm OS Garnet. 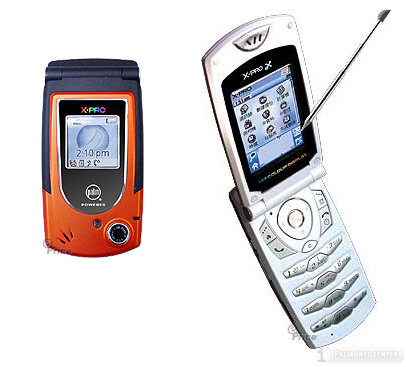 It has a 260k color 2" inch touchscreen 176x220 pixel internal display and a 96x96 pixel external screen. It also features a 1.3 megapixel digital camera, with digital zoom and movie support, and a TransFlash memory expansion slot underneath the battery.

It supports 40 Polyphonic and mp3 ringtones. It also allows you to record your own mp3 ringtones and also comes with an mp3 audio player.

The phone has two different graphical user interfaces  one that works much like a phone with simplified icons, and the other is the full PalmOS interface. The logic is that the regular phone interface is meant to keep things simple and allow you to quickly access phone functions without having to scroll through an intimidating number of icons. However, if you want to access the full PDA functions, all you have to do is press a button and the familiar PalmOS graphical user interface will appear.

Thanks to Gaurav and Craig Bowers for the tip.

Yet Another Garnet Device. Sorry, but wake me up when something newsworthy happens.

Right now, ANY new POS hardware is newsworthy. I like the UI tweaks it looks like they've made to ol' FrankenGarnet!

But you can get this one in ORANGE!

The next Palm Treo is in the wild and its EVDO on Sprint.

700p on Sprint, 700w on Verizon. Comparable specs on both but $100 higher price tag on Sprint. Barring an unforseen tragedy, espect the units to flipflop and be available on both carriers by next summer.

Gfunk, I thought you said EVDO couldn't be realistically supported under FrankenGarnet?

As I see it, EVDO is just another wireless protocol. Im sure Garnet can do it, just not well.

Perhaps I'm uninformed, but who cares? I've been using the Palm OS since 1999, and I've never had a real problem with the software. This Cobalt must be magic.

Its quite simple really. Where in Garnet you would have a reset on error, in Cobalt you would probably just be returned to the launcher.

I've never heard of a Palm OS device locking up from a network problem.

You must be thinking of that *other* PDA operating system made by our favorite convicted monopolist. :)

Jeff, Who said anything about a network problems? In any case the Treo series is notorious for having resets and freezes in low signal areas.

Surer wrote:
The next Palm Treo is in the wild and its EVDO on Sprint.

Maybe. Or more likely it's just someone running the Palm OS Simulator on a PC with EVDO. ;)

Whats the blazer version in the simulator?

> "...the Treo series is notorious for having resets and freezes in low signal areas..."

So "notorious" that it became the most successful smartphone ever?

Are wince devices *really* that bad by comparison? :)

Whats the blazer version in the simulator?

Jeff, enough already. Your constant prattling with no connection to reality is intensely boring.

Thats not meaningful. The new PPC-6700 reports as Windows NT 5.1

Its probably just a reflection of the capabilities of the device.

Surur, your desperate attempts to get me to reveal my personal data are as transparent as they are pathetic. Is this the best strategy your microsoft handlers could come up with for you? :)

4.3 and beyond do not appear on any presently shipping devices.

With Blazer definitely updated let's hope they now do something about the house of cards that is VersaMail!

While a re-release of a garnet GSPDA unit may not be the biggest news, they at least managed to get the prize for strange color themes.

They picked the wrong phone to rebrand though, they should have picked the GSPDA M68. It's a lot better looking IMHO. I'll either buy that or the new POS treo.

Maybe clamshells is the big thing in China? Aren't clamshells bought mostly by young girls? Most of them don't need or want PalmOS...

Did you get my PM?

Palm needs a cheap (orange!?!) & semi stylish Treo flipphone, plain and simple. No frills but good build quality and a solid featureset. Give it specs somewhere in between a 600 and a 650. Sell it for $200 or less w/ contract. It's fine with FrankenGarnet. Watch all of the college kids carry one!

Nexave.de (German Palm site) said a few weeks ago that the TX was going to ship with Blazer 4.3 standard. Could someone be tethering their TX to a phone w/ BT on Sprint?

Perhaps the Treo 700p will ship in early '06 and have an even newer version of Blazer (4.5?). Maybe the .5 indicates EVDO compliance?

I agree. Unfortunately, for now this one is selling (English version) for $429 this side of China.