Owners of Treo 680s and the 700p with the 1.10 ROM update have a new reason to celebrate. Despite the presence of integrated SDHC support (4GB officially and 8GB unofficially) on these Treos, few desktop or laptop PCs are compatible with SDHC cards without requiring the user to carry along a cumbersome USB, PC Card or Express Card reader. Thanks to the latest (albeit pricey) release from Sandisk, its possible to combine a 4GB high-speed SDHC card with an integrated USB plug. This enables the card to be inserted into any PC with a standard USB port allowing files to be written to or read from the card with the need of any additional drivers, software, or clunky external adapters.

Sandisks release is notable indeed for being the first SDHC card to date from any manufacturer with an integrated USB port. With industry support lagging in regards to adding SDHC support to the card slots of PCs and printers, this is certain to be welcome news for users requiring more than the 2GB afforded by conventional SD media but concerned about the inconvenience factor of SDHC cards. 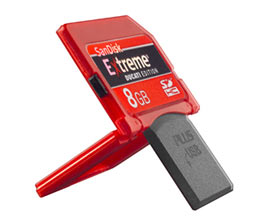 Sandisks original SD Plus cards combined 512MB to 2GB of storage in a high-speed Ultra II SD 1.1 card with an integrated USB port. Now Sandisk has sidestepped the Ultra II moniker and unleashed the first Extreme-branded SD Plus cards in their new collaborative marketing effort with noted Italian motorcycle maker Ducati. Reminiscent of other automotive co-branded efforts (LaCies Porsche-designed external hard drives, Acers successful Ferrari line of PCs and LCDs or the newer Asus Lamborghini notebooks), Sandisk dresses up their Ducati in a slick red color scheme and then throws in performance figures to match their aesthetics.

Also announced alongside the SDHC card are Ducati-branded Extreme CompactFlash cards in 4GB and 8GB capacities touting 45MB/s speeds, so prospective Foleo owners may want to take note at these ultimate CF cards that could reside in their new devices internal CF slot. Sandisk is also releasing a 4GB Ducati-branded Extreme USB thumbdrive with an MSRP of $124.99.

Apart from faster speeds, SanDisk Extreme cards also are highly durable and can resist extremes of temperature, from well below freezing (minus 13 degrees Fahrenheit or minus 25 degrees Celsius) to near boiling (185 F/85C)*3. Both of the SanDisk Extreme Ducati Edition cards come with RescuePROas Deluxe recovery software CD, enabling users to retrieve accidentally deleted images or files.

Are you purposely taunting me with that picture?

Looks nice, doesn't it? I may wind up getting one - I'm having some seriously annoying problems with my Adata 8GB card. If I try to use it with my card reader, it insists that the card is write-protected. But if I use the Treo as my card reader it works fine. It's like it has been somehow locked to the Treo, and formatting it hasn't helped.

Anyone got a solution on that?

I have read that people have problems with AData cards.

My comment was actually referring to the fact that the SDHC card is only 4GB. The story only refers to the 4GB for the SDHC. I even checked the SanDisk site and could find no reference to an 8GB Extreme III Ducati SDHC Plus card.

However, I would love it if there was one.

hmmm, that is odd. The press release does not mention a 8gb sd card (it does refer to a 8gb CF card), however I found the image up there in SanDisk's media library so I'm not sure what is going on with that. Will look into it further tomorrow.

Ryan, are you photoshopping again? :-D Shooda just slapped 32mb on there!

This does look and sound pretty killer tho. The speed and the USB would be really nice. Although the price is tough to swallow now, when I just a class 6 8GB on newegg with reader for $80. Works perfectly on the 680 outta the box.

The speed may come in handy on video recording with real cams. Nothing the 680s wimpy vids are gonna push tho.

As a Vista & SDHC user, one of these cards would come in extremely handy, since Palm Desktop still has "issues" (to say the least) under Vista and my laptop's SD reader cannot handle SDHC.

I'd personally like to see Palm integrate some kind of DriveMode or CardExport feature as a standard feature of future FrankenGarnet devices as a workaround for situations just like this.

Now, I did see on Sandisk's site that they have their regular blue and Ultra II 8gb SDHC cards out now (a lot more than the generic brands but that's no surprise) so I'd expect an 8gb SDHC Ducati card to arrive just in time for Christmas!

I've got a class 2 and a class 4 SDHC card. I can tell a pretty substantial difference between them when using my Canon digicam and especially when pulling files off of them onto my PC. Not a bit of a difference between 'em on my Treo though.

hkk, just out of curiosity, what made you decide to update to Vista? I toyed with the idea for awhile but the verdict from most of the technocrati (is that a word?) seems to be "Wait for SP1" - kinda like it was with XP initially. Was it the graphics, better security or did it just come free with a new PC? ;)

I bought Vista then got so disgusted fighting all the incompatibilities, I just gave up and put back XP.

The bit that says Software is what you're looking for. But I think all 680s shipped with the 'unofficial' 8GB support from the get-go. (My firmware is TREO680-1.04-ROW and it works fine.)

I like to stay on the bleeding edge. Unlike many companies (Palm included), I didn't stick my head in the sand over the past 2 years and tried to plan out things to be Vista-compliant a year ago--DX9 graphics all around, 2gb RAM, etc. I skipped Microsoft Office 2k3, knowing that 2k7 would launch simultaneous with Vista and it'd be a worthwhile upgrade.

My personal Vista experience has been FLAWLESS (1 laptop, 2 desktops + most of our machines at work) aside from 3 hiccups:

1. Palm Desktop not being updated (no surprise there)

2. Lexmark leaving me dead in the water with a <1 year old laser printer having no updated Vista drivers (just the lame ones built into the OS). I'll learn my lesson and never buy another Lexmark product again.

3. A handful of older legacy games don't work under Vista (no biggie, that's why I keep an older P4 w/ XP on it as my backup rig).

Other than the issues above, Vista is a tremendous improvement in every way---security, UI, stability, etc etc. It's more sluggish than XP on anything less than a dual-core, 2gb RAM system and still has some initial bugs. But overall I experience far, far fewer random BSODs and system freezses under Vista than under XP. Heck, even the built-in Windows Mail client in Vista ia a huge improvement over Outlook Express if you care about those sorts of things. Also, SDHC cards work MUCH better under Vista than XP (go figure) and some older no-name USB devices I had laying around (card drives, thumbdrives) work better under XP than Vista (again, go figure).

Besides, as a gamer I figure that sooner or later there will be a DX10-exclusive title that i simply MUST have so it's better to be on the DX10 bandwagon sooner rather than later.

P.S. Retail boxed machines with Vista pre-loaded are horrendous-the bloatware has absolutely gotten out of control these days. I would not TOUCH a retail system unless it came with either a "clean" OS install option and/or a genuine OS restore disc that didn't reinstall all of the garbage. I'd stil rather build my own any day!

I'd still rather build my own any day!