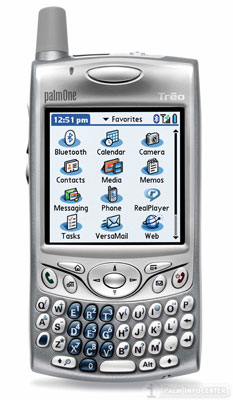 The 1.05a update is available from Palm Support.

Palm says the update permaneltly take up about 600KB of free space. There are both Mac OS and Windows instructions available. The update will also require a separate update for VersalMail to v3.1, after installing the 1.05a update.

Just spent the last hour on this update. The first time I got the rom error message. Second trip was with the alt user method. This time it worked. Had 6.1 mb free memory before, now after it is 13.2. Do not know the reason but on the first quickie look the device is same progs as before, if I got the same data as before I am satisfied.

Sorry, but I didnot mean to mislead. I just found out the my avantgo files did not reload upon the update restore. I'm down to 7.1 mb now, that's still on the positive side of the ledger. I'll take it.

This update killed my smartphone.

Where, the teeming masses want to know, is the dam'd 700p update?

Palm's refusal to address ANY of the 700p's showstopping bugs is absolutely tragic.

I watched TreoCentral's hands-on videos of the 680 in action tonight and almost wept as the 680 whizzed from one task to the next. The beautifully designed, lag-free phone app (with new Favorites screen & integrated Contacts) made the 700p look like a lame mule.

I'm glad to see some initial rumblings of 700p user discontent within the community (mostly on TreoCentral). We need to take a hard stance and show Palm *AND* the carriers that this is simply unacceptable. I'm used to this foot dragging from Palm (the T|E2 has been waiting for its "find" bug to be fixed for 18 months now) but the two big (Sprint & Verizon) carriers usually jump all over Moto/LG etc and make 'em address major bugs/instability (even if they overlook missing features & crippled BT profiles).

The 700p is definitely my first and last Treo. It's been a miserable five months with the thing and I KNOW what I am doing when it comes to POS. 2x weekly prunings of my VersaMail database and SMS log are required just to keep things usable. Battery life with the Seidio 2400mAh battery is measured in hours; I'm doing well to make it through a 12-hour day without a recharge. I've put my BT headset in a drawer since it's more trouble than it's worth on the 700p. Let's not even get into the grievious lack of voice dialing (BT or otherwise).

The ONLY areas where the Treo gets it right are "anywhere" internet, EVDO DUN, intuitive one-handed navigtion, strong correlation between contacts/SMS/camera/photo apps, and the removable battery/vibrating alarm/charge LED combo.

Everything else was better on my TX...which is probably where I'm headed once a compelling new dumbphone is released for Verizon.

Sorry Palm...you blew it. You had me by the b***s for 10 years with mediocure PDA hardware but stunning UI/PIMs and a superb software library. You forced me into a Treo by default. Now that I've been burned to the tune of $600 I'm not going to be another paying guinea pig. I managed to unload the LifeDrive within my 30 day return policy but Verizon's 14 day policy for the 700p was too brief (and I was being too optimistic). I'll *not* make that same mistake again.

After reading the minor benefits it offers, I'm gonna pass since it ain't broke I ain't gonna fix it.

The mac version doesn't work - I use markspace, but couldn't get it to work with palmdesktop either. I worked around the 'PALM' folder problem others had, that's not hard - just make a folder named 'PALM' but it still won't work for you. I finally installed it through markspace installer to the SD card. It doesn't auto run as palm claims, and even after YOU run it and it says the update was successful your still at version 1.04a-VZW. I've spent the last 3 hours with it - F*ing ridiculous. Nothing works.