The latest addition to Palm's on-again, off-again instruction book series has quietly been released. "Now You Know: Treo 680" is now available for sale at Amazon and other major retailers with an MSRP of $19.99. Amazon's current sales price is 32% less at $13.59.

Published by Peachpit Press and authored by Patrick Ames, this 160-page guide follows the look and feel set by other volumes in the set. Targeting certain Treo smartphones and handhelds like the T|E and Zire 31/72, Palm's "Now You Know" line has historically been, essentially, a very glossy user manual targeting novice or beginner users. 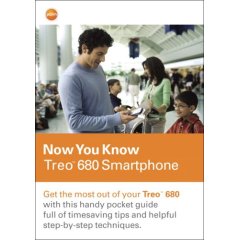 The release of a Now You Know guide for the Treo 680 bodes well for its longevity and Palm's enthusiasm for the product. The deafening silence of any sort of book, much less a ROM update, doesn't speak very highly of the company's commitment for the Treo 700p. Novice 700p users may find some value to this 680 guide as well; the two most recent Palm OS-based Treos share similar PIM apps as well as unified SMS, Photo, Camera, and multimedia apps.

There has been previous released in the series for the Treo 650, as well as the Treo 700w/wz.

A weekend of several local Books-A-Million, Borders, and Barnes & Noble stores failed to find this book. It's quite possible that Palm has delayed the book's widespread availability by a few weeks to coincide with Cingular's latest rumored release date of November 14th.

I just saw this 2 days ago at Barnes and Noble. I took a picture of the books they had. I totally forgot to mention it.

Gone are the days

when Palms like my trusty old IIIc shipped with a true book as a manual. Every third-classy gadget in austria can ship with a manual...I really wonder why Palm cant include a good one instead of all the advertising crap!

Hurrah! The book is out!

Erm... now could we have the Treo to go with it?

Or is that stupid? Palm?

The books are quite well done

I actually purchaed one of the earlier versions of this book ("Now You Know Zire") for a relative that had purchaed a Zire 31. When they decided that a PDA was not for them they gave it back to me and I perused the book at length. It's got nice glossy pages with some quality aesthetics and layouts. Everything is targeted towards an "advanced novice"; I figure the target audience is someone who owned an old Palm and just used one or two functions on it. Now that same person has a snazzy new color Palm & is wanting to try to explore its features a bit more but still have some hand-holding.

It's still inexcusable for Palm not to include a small printed booklet with their devices (funny how Treos still have printed documentation--likely a requirement of the carriers) but a book like this doesn't cost *that* much and it's nice to have the option.

I'd rather see Palm offering stuff like this for sale than gold-plated styli.