Broadcom Corporation has announced that the new Palm Treo 680 smartphone is the first commercial cell phone to implement its new M-Stream technology. M-Stream technology provides significant improvements in handset reception and voice quality over legacy cell phones without the need for an upgrade or modifications to an existing network infrastructure. 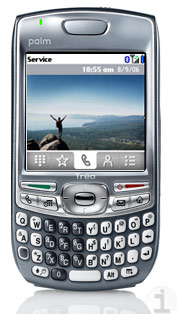 The Treo 680 also includes Bluetooth silicon from Broadcom. Blutonium BCM2045 is an advanced single-chip solution designed from the ground up to promote and enable the adoption of Bluetooth in phones, computers, peripherals and other devices. The BCM2045 supports the new Bluetooth Extended Data Rate (EDR) that provides 3 Megabits per second, there is no word if the Treo will support this.

...this will make up for the lack of an external antenna. On the other hand, things really cannot get any worse reception-wise than they are on the 700p.

I'm also very curious to see how this affects the BT performance on the 680. Palm hacked Garnet to support BT 1.2 (or did they lift that stick out of the Cobalt Carcass and shoehorn it into Garnet?) so now maybe we have some software capable of doing it justice.

All in all, things are looking quite rosy for the 680. Palm might as well go ahead NOW and EOL the 700p and put it out of its misery. Sad to see that Palm's 2+ years of customer feedback on the Treo 650 went straight into bettering the 680 experience. I'll wager that more time & money went into crafting the 680 than was spent on the 700p travesty. The 680 looks to be a fitting swan some for the Palm OS despite being a decidedly "budget" release.

Hey, Kris. I've been busy for the last few months with work (which concidentally involves the 680) and haven't had time to keep up on reviews of the 700p. Can you summarize the basic issues that people are reporting (or point me to a place where I can quickly see them)?

Sorry I can't say anything about the 680, except "I like it!" Don't think Palm or any yet-to-be-announced GSM carrier that releases the 680 could have any objections to me saying that. ;-)

Pleae continue to post your thoughts/opinions on the 680 and other PALM products on this board. You seem to be the most informed and least antagonistic person here and your opinions and thoughts are very welcome.

I'll e-mail 'em to you so as not to ruffle any feathers here by pointing out the "issues" and what, if any, workarounds I've been able to come up with for some of the most glaring problems.

Shucks, I already LIKE the 680 and I haven't even fonded a Cingular retail store mockup dummy! It seems to be a far better fit for its target audience/price than the 700p is.

Can you summarize the basic issues that people are reporting (or point me to a place where I can quickly see them)?

Beersy, since TVoR isn't afraid of "ruffling any feathers", here are the pros + cons of the Treo 700p:

Con:
- Marked slowdowns (think LifeDrive) very soon out of the box. The... constant... hesitations... when... switching... applications... ruin... the... user... experience. If I wanted annoying delays I would have switched to PPC/Windows Mobile YEARS ago. Once again, Palm's decision to use CrapRAM rears its ugly head.
- System instability. Even with no added applications it crashes. Forget about trying to have a stable device if you're running a lot of programs that had been stable on all previous versions of PalmOS
- Disappointing battery life.
- Unreliable email with VersaMail. Palm needs to admit they can't create a stable email client and just buy something like Chatter Email instead.
- Poorly-implemented cellphone functionality. The poor voice quality and below-average reception are disappointing. But having the phone spontaneously crash when you answer a call is unacceptable. I carry both my Samsung i500 and my 700p with me most of the time. I'll sometimes use the Treo for a voice call to try and save my anytime minutes on my i500. On numerous occasions the voice quality on the Treo has been so poor that I've had to hang up and call the other party back on the i500. The difference in call quality between the two phones is staggering. Don't believe me? Borrow a 700p and compare it to YOUR i500 and you see for yourself.

Yeah, well.... I was kind of hoping to hear it from someone whose entire self-image isn't built on an apparently uncontrollable psychological need to ruffle feathers. ;-)

> ...I was kind of hoping to hear it from someone whose
> entire self-image isn't built on an apparently uncontrollable
> psychological need to ruffle feathers...

Well, you can always go here:

and read biased-towards-TREOs fan-boys' posts about the 700p.

If someone's biased *toward* a product and still takes the time to detail the problems they're having with it that's (potentially) valuable information in my book. Unfortunately, I don't have time to sift through 314 "where's the midnight color theme?" and "yeah, what's up with that?" posts to get a bead on the real situation.

Are the lags described mainly when switching applications?

"System instability"? As compared to what?

Bah, I'll probably just have to get my hands on one and test for myself.

And hopefully us europeans will eventually be able to enjoy a new Treo some time... maybe 2008? ;-)

Hey, at least you guys get the 750v before the rest of us. Spare a thought for poor old Australia... absolutely NO word at all from Palm over here on the 680 release date, or whether they'll offer colours. (sniff)

Just curious - the other day Colligan said at a financial presentation "TI..." swallowing it with the words "not yet announced" during a sentence or two that contained Broadcomm and Qualcomm mentions.