Palm's latest 2007 SRP guide lists a new Blueooth keyboard, the "Palm Wireless Bluetooth Keyboard". Bearing a publication date of April 27th, 2007, this price sheet shows the Palm part number for this new model as 3245WW. No release date is given but Palm generally updates this sort of information on a quarterly basis, so an arrival in the June/July timeframe would seem most likely.

Palm gives a compatibility listing of the Tungsten E2 and TX handhelds and the Treo 650, 680, 700p/w/wx, and 750 smartphones. Oddly enough, neither the LifeDrive, any older Palm PDAs with Bluetooth or the newly-released Treo 755p are listed amongst the compatible devices. MSRP of this new model is listed at $99.99. 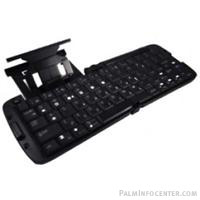 The current "universal" Palm wireless keyboard (which uses IR), model 3169WWZ, is listed as being compatible with a wider variety of older models, and is still shown as an active product with an MSRP of $69.99.

A search of several online price search engines reveals a few coarse images and some basic details of the new keyboard. It appears to be a sleeker, more rounded design than its predecessors with a full 5-row design and fullsize keys.

So is it only the current BT KB from Palm that will work with the LifeDrive? Anyone had success with any others?

The ThinkOutside BT & IR keyboards work with the LD. It's similar but not identical to the Palm models and has a different driver. But TO hasn't done much in the way of driver updating since they were acquired last year by iGo. I believe the Treo 700p was the last product they updated their driver to support, as they state the 680 is still "in testing".

Still, it might be worth looking into. I think J&R or one of those NYC mail order + retail outfits was selling those keyboards pretty cheaply a while back...

I had one a while back for my Zodiac and I was very impressed with the tactile feedback and build quality of the earlier TO keyboards.

this may be a dumb question but why is palm coming out with a blue tooth keyboard. it seems hardly anyone carries think outsides keyboard so it must not be very popular. unless palm is adding some new thinking to the mix? maybe it will have a lighted keys for ising it in the dark:)

or maybe they will add a usb drive in the key board so that a thumb drive could be plugged into the keypad and show up as another drive on the treo.

I wonder what the definition of "full-size" keys is this time? It irritates me to no end when companies make that claim without backing it up. The Brando BT keyboard is one example of (IMO) false advertising. The keys are way smaller than a standard keyboard, in both dimensions.

Another thing that I hope they fixed is that horrible non-standard key placement on the IR universal keyboard. Putting the up arrow where the /? key should be is a horrid idea. When I'm typing along fast (that is the point, isn't it?) and finish a question, this is the sequence:

-hold down the shift in preparation for the question mark key
-hit what should be the question mark key, but instead jump up one line because I've hit the up arrow; this results in highlighting the previous line of text because I am holding down the shift key
-hit the spacebar so that I can start the next sentence; this results in erasing everything that I just inadvertently marked
-yell out a few expletives when I finally notice what I've done

No, Palm, I don't stare at the keyboard or screen when I'm typing information during a meeting. Yes, I do expect the punctuation keys to be in standard locations. Yes, I do look for the arrow keys because I don't expect them to be in standard locations. Yes, I think you got it backward. No, I will not buy another one of your keyboards unless the keys are standard, both in size and in location.

I have a hard time believing that the people in your R&D departments are touch typists. Next time, ask your secretaries where the keys should be. They know.