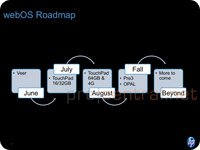 Last week, Precentral received quite the bounty from an anonymous HP insider in the form of a leaked HP roadmap. The internal presentation covers a period of time ranging from the Veer 4G's launch in May/June to an unspecified time later in Q3.

Since the launch of the Veer and Wi-Fi TouchPad have already occurred, let's look at what HP has in store for the coming months. August will bring a flagship version of the TouchPad in the form of a "glossy white" 64Gb version with a CPU boosted to 1.5Ghz. It's unknown if this is merely a higher-clocked version of the same Qualcomm APU found in the current TouchPad or an entirely new processor altogether. At any rate, this should go a long way to address some of the TouchPad's major performance issues with WebOS 3. It's unknown if the 64Gb TouchPad will also be offered in black or if the white case will eventually trickle down to the lesser SKUs.

Also arriving in August is the AT&T HSPA+ "4G" TouchPad, still in the traditional black color scheme and with 32Gb onboard. Coincidentally this matches up with the just officially announced TouchPad 4G and will also carry the 1.5Ghz CPU found in its 64Gb sibling.

The Pre 3 is still in them mix but now unfortunately only slated for a launch in the "fall" alongside the 7" version of the TouchPad nicknamed "Opal". No additional word on the Pre3's exact release date, carrier availability, or specs is listed in the leaked slides. The Pre 3 has seen its release date slip from July to August to the new unspecified "fall" date. The Opal was discussed at length last month in our story about Inventec landing a large HP tablet order.

The leak concludes with some sales-related matters. HP confirms the limited quantity status of the 16Gb TouchPad SKU as well as the higher-margins provided by the almost-ubiquitous 32Gb version. There does indeed appear to be a shortage of TouchPad-compatible accessories at retail, which I have noted in my own findings since launch date. Finally, the embargo for HP-branded TouchPad advertising will be lifted on July 17th, so retailers will be able to advertise the TouchPad utilizing methods other than directly approved by HP if they choose to do so.

The number of daily activations are steadily increasing. Just over two weeks ago, Senior Vice President of Android Andy Rubin revealed via Twitter that there were 500,000 Android devices activated each day. He also said that the rate of growth was increasing by 4.4 percent each week, which matches up with the device activation number stated in the earnings call.

If Google can maintain that growth rate, it will reach over a million daily Android device activations by October. Yet, with the growing number of Android-enabled tablets entering the market as well as lower cost to consumers on both smartphones and tablets, daily activations could increase much faster.

gmayhak, that first link you posted is just... yikes. Aside from the not more good grammar, it's citing a magazine, which is repeating something from another magazine, which claims that lots of Android users searched for the term "iPhone 5 release date" as proof that there's going to be a mass migration from Android to Apple?

Look, I've been in that position of really loving a given device or platform, but this is where the term "fanboy" comes into play.

No argument there Adam, it's just starting to look like Gekko's getting a kickback from google.
Fanboy, we all are fanboys or we wouldn't waste time posting on these forums. Gekko's a Droid fanboy, I like to work with leading technology, quality products so I'm an Apple fanboy. If you remember a few years ago I was a Palm fanboy until they screwed the pooch... http://www.palminfocenter.com/news/9106/interview-with-tech-center-labs/

grandpa - i use what i think is best for me. the best solution, the best value. and i'll switch on a dime if i have to. never fall in love with a company. it's only technology - not a religion.

Gekko, to each his own. I've pretty much moved on from HP / Palm / Android to iOS not because of love but because it isn't a fragmented wannabe operating system.
Everything functions perfectly together if you are a Mac user, I left PCs a few years ago so maybe if you are a PC user Android is a better solution for you.

BTW, I'm pretty proud of my grandkids and although you persist in trying to be disrespectful I recall this quote....
"Before you diagnose yourself with depression or low self-esteem, first make sure that you are not, in fact, just surrounded by assholes."
 William Gibson

disrespectful? i was trying to be funny.

congrats on your non-clock app. finally.

A World Without Apple