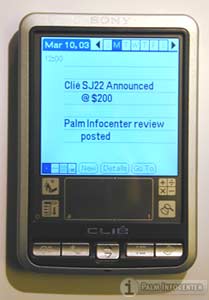 When the SJ33 was announced and rumors of an SJ22 surfaced, many of us naturally assumed that they'd share the new flip-lid form-factor. Surprise! The SJ22 is basically identical to the earlier SJ30 (with its great hires color screen), but is clad in the subtly different SJ20 casing. There is one significant difference between the two models however; while the SJ30 debuted at $300, the list price of the SJ22 is $200.

Because PIC already reviewed the SJ30 in August 2002, we'll refer readers to the SJ30 Review instead of repeating our comments on the design, hardware and general impressions here.

Software: The only other main difference between the "new" SJ22 and the earlier SJ30 is the included software: the SJ22 doesn't have Docs-to-Go, and substitutes Kinoma instead of gMovie for movie viewing.

The "S"-series: Its not easy to keep track of the ever-changing Clie lineup, but we try :-)

With the SL10 gone, so is the option of a Clie that uses AAA batteries. What won't be missed is its screen, which suffered from poor contrast and slow refresh. The SJ20 provides a much better greyscale screen at the bottom end.

At the top of the line, the SJ33 66MHz adds audio and a fresh new design (see this PIC article for more).

[ I'll refrain from a rant about Clie model naming conventions, but why wasn't the SJ22 called the SJ31? And with its new design, why not call the SJ33, the SR30 or something? ] 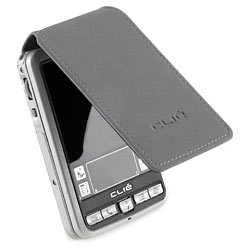 Family Affair With the introduction of the new TG50 expected to replace the T665C, the SJ-series become the only Clies using the Dragonball/OS4. The rest alll use ARM/OS5.

16MB RAM is now standard across all lines, but ironically, the SJ have ~15MB usable, while the TG and NX/NZ have only 11MB (due to 4MB being reserved for extra dynamic heap). To compensate, the OS5 devices are compatible with the faster, higher-capacity Memory Stick PRO media. The SJ-series are not, and are restricted to regular purple and the forthcoming 'Select' MemorySticks.

Another feature that the SJs lack is the "enhanced" Ir which allows control of Home Theatre gear. Also, instead of a cradle, a connector plug and USB and power cables are substituted.

A cradle is available for purchase seperately, as are numerous other accessories like the Audio adapter, GameController, Mini- and Compact Keyboards, Bluetooth MS, Camera MS and the skinny styluses. The cost of these relative to the device may mean that few owners will take this "incremental upgrade" path.

The SJ22 is a very capable handheld with a fantastic screen. At $200 it sets the benchmark for a PalmOS entry-level color handheld. Of course, we don't expect the other Licensees to stand still...

theyre really going for the throat of the palm OS device market.

I predict Palm will do it first, by basically shoehorning the lackluster m130 screen into the Zire casing, but the way Sony are charging along, they might surprise us all.

It'd be great, however, to see Sony somehow manage to come up with a color Clie that took AA batteries and had a reasonable button layout.

If nothing else, Palm stil offers the m125 to hardcore users who might be in the middle of nowhere for so long that they have no reasonable power source than disposable alkalines. Yes, I know there are gimmicky solar chargers and whatnot but those are probably more hassle than they are worth.

(One of the neatest additions I ever had for my old MicroTac cellphone was a huge piggyback AA battery adaptor. It snapped onto the back of the cellphone and gave you 30-40 mins of talk time with 6 AA batteries. Yes, it was wasteful but if you were really in a pinch or your car died on the side of the road, it was a lifesaver).

Fly-By-Night @ 3/12/2003 6:09:43 AM #
You can get (very cheap) mobile phone charge 'boosters' that run off 9v batteries -- you just plug them into the normal charging port. I've also seen wind-up ones a la Trevor Bayliss radio; but that sounds like too much hassle to me!

... huge piggyback AA battery adaptor. It snapped onto the back of the cellphone and gave you 30-40 mins of talk time with 6 AA batteries.

should explain why you haven't seen this:

Clie' (Which seems like the natural plural, IMO), stuffed full of propriatary multimedia hardware, are notorious battery hogs. So far, nothing beats a Li-ion pack for size/weight-to-watt/hour ratio. A alkaline-powered color Clie' would be EVEN bigger, and have an EVEN shorter battery life.

A Li-Ion-or-AAA arrangement like the one in the Handera 330 might work for them, but would still make the physical unit signifigantly larger.

...and had a reasonable button layout.

Can't help you on that one. Maybe they make more sense if you're japanese.

SJ whatever: I must carp!

I have to agree though. We need a TG50v. YOU HEAR THAT SONY? TEE GEE FIFTY VEE!

i loved my handera 330, but software compatibility was more of an issue than i would have liked, though not horrible. software graffiti is the best.

320x480 is the future, hopefully. one hardware resolution to rule them all.

RE: Hate the up/down button

i2oadi2unnei2 @ 3/11/2003 3:29:37 PM #
This is true, however, I rarely use the up and down button on my NX because I have not gotten used to the 'clam shell' design and have always used it as a 'tablet' style. On the NX, in the tablet form, it would have been nice if Sony added the buttons near the lower portion of the screen that is taken up by a half inch black plastic thingy...

abosco @ 3/11/2003 3:58:10 PM #
Is there, by chance, a way that you can turn off the inactive InfoPalms? It's hard to explain, but what I'm trying to say is that it is hard to read the rating if it has 4/5 InfoPalms because the fifth InfoPalm is still there, but only a little darker. What I'm asking is can you remove that last InfoPalm/half InfoPalm instead of just making it transparent?

Just a suggestion. Thanks.

just one question, does the sj-22 have the same small "bump" (where the "batteries" of sl/10 should be) on the back as sj-30 does ?
i mean, is the casing _exactly_ the same with the only exception of that black "frame" around display ?
if this the cas i would prefere sj-30 to sj-22 since i like the silver design more :o)