Updated Group Sense Limited has revealed more information and specs on two new upcoming Palm OS Smartphones. Both run Palm OS 4.1 and feature very small and lightweight designs. The phones will be targeted at the Asian and European markets. 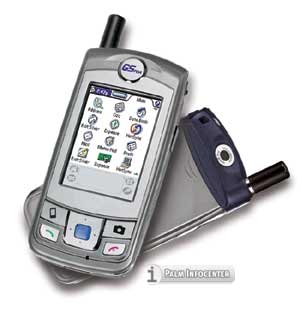 Both models share nearly identical internal specs and capabilities and differ only by form factor. The Zircon is a flat, candy bar style phone model while the Oynx has a clamshell/flip design.

They run Palm OS 4.1 with a 33mhz Dragonball processor and use a 2.2 inch D-TFD color screen with a 160 x 240 screen resolution. Both utilize a virtual graffiti area for data input. Both phones include 16MB of RAM, but lack memory expansion slots.

The Smartphones use a class 10 GSM/GPRS 900/1800 dual band radio and are powered by a 900 mAh removable Lithium Polymer battery. GS rates the battery life at 100 hours standby with 2 hours of talk time. The phones also feature an IrDA port, polyphonic ringtones and vibration alert. They will also include applications to access WAP, Email, SMS/EMS/MMS and J2ME data services. The Zircons dimensions are 100 x 48 x 21.1 mm (3.9 x 1.9 x 0.8 inches) and it weighs approximately 139 grams (4.6 ounces).

Each model also has an integrated digital camera which can capture small pictures at up to 352 x 288 pixels. Pictures can be sent from the device with MMS. The hardware buttons include a 5-way navigation pad, talk and End buttons and two application buttons for messaging and the camera application.

The models may be available in parts of Asia as early as May and are expected in Europe sometime in the third quarter. There is no information on pricing or carrier availability. The devices will not likely see a North American release because they lack a tri-band cellular radio. Most North American GSM carriers operate at the 1900mhz band, which these models do not support. 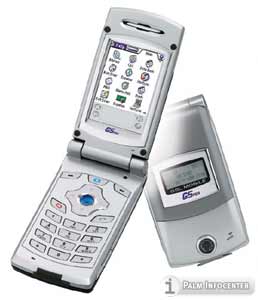 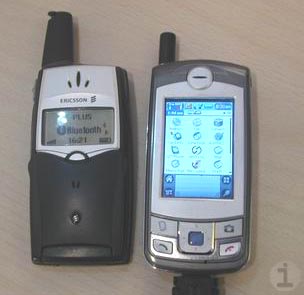 Back in December, Group Sense PDA Limited became a licensee of the Palm OS. Under the terms of that agreement, GSpda announced it will develop and market mobile devices based on the Palm OS for the Asia Pacific region, including China, Taiwan, Hong Kong, South Korea, Thailand and Singapore.

Thanks to PDAFrance for the images.

jcmorganstein @ 4/8/2003 2:40:31 PM #
Yeah. I can't imagine what target audience they are trying to reach... unless the price is significantly lower than exisiting or soon to be released models. Personally, these seem like a step in reverse. I'm waiting for a model similar to the new Samsung referenced above... but for CDMA. That's all I want in a Palm phone... wireless connectivity, small size, hires screen, fast CPU speeds, memory expansion, MP3, camera. What else is there ;-))

I don't know, I think this is very smart marketing move.
I think there is a fundamental market for smartphones lost because of their, thus far, relatively large size. I know I would get one if they were the size of the current smaller phones. I have a Clie, but would still carry a small smartphone because it's not possible to always have the clie with me but I can always find space for a small cell. And I think many consumers who are interested in the more basic functions of a PDA will be more interested in these smartphones if they're smaller.

That beings said, I really think hi-res is a vitally important feature when you shrink the screen this much; not having this may turn out to be a fatal flaw. On the other hand, folks are snatching up the current crop of color cell phones, and their screens are middling at best.

robrecht @ 4/8/2003 2:58:15 PM #
For the US market, we definitely should have CDMA (& Verizon). I can live without bluetooth on a palm-phone, and I certainly can live without a gimmicky camera. A small folding keyboard accessory, like Palm's XT would be great-

tiger_bb @ 4/8/2003 8:06:31 PM #
To compare Samsung with GroupSense, just like you're comparing a Benz with a Toyota. They're serving different customers! If I were you, I would rather compare Zircom and Onyx with HS Treo 270. They're both using os 4.x, no expansion slot... BUT, GroupSense's have built-in camera, and a virtual graffiti area...

If you treat it as a mobile phone, you will be very happy, and satisfy with the functions provided...
- a large color screen
- install your favourite ringtone easily
- a built-in camera (that means caller-id with photo)
- a huge but well orgainzed phonebook, datebook and notepad to jot down any important information...
- you can even store numerous SMS/E-mail/Fax/etc...
- you can use MSN/ICQ/Yahoo Messenger, etc...
- install any games you like... (no more boring Snake or Tetris...)

doesn't it a perfect specification/functionality of a mobile phone you're dreaming of?

even I'm using a T|T now, I will definitely buy one when it is avaiable... definitely, it is not a perfect PDA.... but, it's a perfect PHONE...

you need a cam for that?

How much smaller are the Toyota models than the Samsung?

Ambassador @ 4/9/2003 9:39:56 PM #
I have never been a fan of all-in-one devices but this has me thinking that having my pda info on my phone as well as on my real pda would be just fine. I would need to be able to sync them together so that I could modify a database on the phone and have that synced to my pda too.. This has possibilities. And to think that it is not a brick or ugly as a Treo!!!!

Serving Christ thru serving others

Stop for a second...

They make even the new Kyocera look like station wagon!

Zircom is much smaller than i500, and it also comes with a removable 900mAH battery, which allows 120 min. talk time and 100 hours of standby... Also, considering i500 is using a 300MHz processor, and Zircom is just using a Dragonball, which should be more battery friendly...

Don't forget, i500 has built-in expansion slot, MP3/Video playing and dual color screen! Will the 1100mAH battery enough for running a whole day?

To each his own. If a good color & contrast, I think I could get used to it very quickly and considering the overall size of the phone, very happily.

treo007 @ 4/9/2003 10:02:02 PM #
I'm not nieve enough to think I'm representetive of everyone else out there, but I really need a built in thumb board for this thing.. To me, a smartphone isn't a smartphone without quick email (both push email and ultra quick data entry via a built-in keyboard).

The recent deep discounts via rebates from Handspring and Amazon would leave one to believe that a new Treo is coming out soon. Please let it be AT LEAST a OS 5 device with SD expansion. Bluetooth, a more Clie like Jog Dial, internal antenna, and a mic and earpiece on the lid would be nice as well. Handspring, are you listening?? Let's hope.

on the other front, i hope something new is coming from HS, they haven't released a new device in almost a year. the deep discounts can mean one of two things...

Anyway, I'm still really waiting for a thumboard that will sit vertically in the back of the unit and flip out to go horizontal at the bottom. I'm sure it can be done and it makes the most sense. The Danger Hiptop's screen does something similar (except it basically inverts, going from horizontal to horizontal).

It's easier said than done, but if Handspring could produce a thumboard like that with the same specs as the new Samsung OS 5 phone (plus bluetooth and upgradeable to CDMA 3g), they'll have the most technologically advanced gadget on the market.

Calroth @ 4/10/2003 7:42:30 AM #
The problem with a thumbboard is, it restricts how small the device can be, especially its width. I don't think you could even subtract 1 cm from the width of the Treo without making the thumbboard harder to use. And width is a very important factor when actually using it as a phone... holding a flat, wide object to your face feels a bit strange.

So, given that smartphones with thumbboards aren't going to get much smaller, your best bet is probably the next iteration of the Treo (or the Tungsten W).

lcohen @ 4/10/2003 11:36:41 PM #
I just had someone inquire about the availability of these two phones directly with their office in HK. They stated that they will be available no earlier than End June...
I hope that by that time the new samsung is out... It will be interesting to compare the two..