Sony has officially announced two new handhelds. The PEG-UX50 and UX40. The models have a mini laptop like design with a large swivel screen, digital camera and built in keyboard. The PEG-UX50 has both integrated in Wi-Fi and Bluetooth wireless, while the UX40 only includes Bluetooth. Sony is billing the new device as a "personal entertainment communicator." 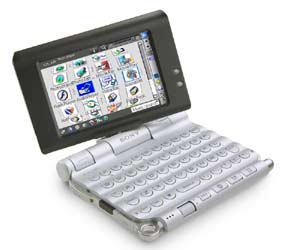 The Clie PEG-UX50 and UX40 run Palm OS 5.2 and use a new processor system developed by Sony called the Handheld engine.

For the first time, Sony has designed, engineered and manufactured a new processor for the handheld that has been optimized with three key benefits in mind: multimedia processing, battery life and miniaturization. Dubbed the Handheld Engine, the new processor (model CXD2230GA) is expected to find its way into future iterations of CLIÉ handhelds. By integrating various I/O functions including two-dimensional graphics engine, digital camera and Memory Stick PRO media interfaces onto a single chip, Sony was able to reduce the overall size of the CLIÉ UX50 handheld

The Handheld engine combines a Sony manufactured ARM926 based processor, a Digital Signal Processor (DSP), and a CXD2230GA graphics accelerator. The processor speed varies between 8 MHz and 123 MHz, depending on the demand. The system and dedicated graphics chip will support a version of OpenGL and can play back MPEG video at 30 frames per second.

The screen is a swivel design that can be rotated and used in both the flip up and tablet mode. It is a TFT color backlit display with 480x320 pixel, 65k color screen. The display is used in a horizontal landscape mode. The screen lifts to expose the keyboard, or swivels to hide the keyboard and use as a touch screen. With this design more room is available for the built in keyboard, which allows for more space between each key.

The models have a total of 104 MB or RAM. Of that 16 MB is available for traditional storage of files and programs, another 16MB is used for the dynamic heap. Another 16 MB or non-volatile memory is dedicated for system back up to save the contents of RAM when the battery is low. Finally, there is an additional 29 MB available for media storage, that acts as a traditional memory stick.

The devices has integrated Wi-Fi (802.11b) and Bluetooth for wireless communication. The UX40 model does not include WiFi. There is also a IR port, speaker, microphone, Stereo headphone jack and a memory stick pro slot.

The digital camera is a 300k pixel camera and has 3x digital zoom. The camera supports up to VGA (640x480) resolution, You can also record and play back video (MPEG4, 30 fps, 160x112) and can upload images directly to Sony's ImageStation website.

There is an extended battery clip on accessory, the PEGA-ED40 that will increase battery life up to 3 times the standard capacity. It costs $120 and attaches to the bottom of the handheld.

"When people think of data, they typically think of office documents, or in the handheld world, things like address books or calendars. But at Sony, we see beyond the 'tool' aspect of the handheld market," said Masanobu Yoshida, president of Sony Corporation's Handheld Computing Company, "We have the capability of injecting wonder, joy and levels of customization into a portable device so it becomes like a companion or a friend to a lifestyle that uses digital technology." 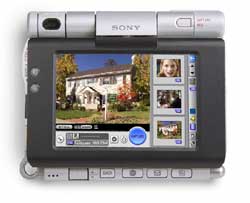 That seems like a long wait. I want the T3!

Hello Mike Cane, the T3 has portrait and landscape!

Given Palm OS's "architecture", trying to take full advantage of lots of memory is hard. Sony evidently didn't feel it was worth the considerable development effort to get PalmOS to do better.

Well, these devices do have 29mb extra storage area, but I believe that with OS6, the T|c's and the (hopefully) T|t3's 51mb will be made just as useful.

The UX series has 16MB available for built-in applications and 29MB for media storage (JPGs, MPEGs, etc), which is 45MB. I'm guessing there's some ROM that can be opened up in the future for more room as well.

hoodoo @ 7/18/2003 2:18:01 PM #
Maybe the currency comparison wasn't the right way to describe it. Sony USA has dropped their prices, and Sony Canada has NOT, leaving the wide pricing disparity. Palm priced their new products correctly, including price drops later.

Besides, most Canadians' price references will be to the US $, not Yen.

"Someone asked about the high prices at today's press conference. Basically, this person pointed out most handhelds are going for about $300, so how can Sony justify $700? A spokesperson answered that Sony had seen good sales of its previous high-end Clies and expected the same for the UX models."

The prices in Europe are similar to those you have in Canada.

Ridiculous. Besides Palm gives better support to its customers, than sony. I guess I have to re-buy all those accessories I sold from my m505!! OH well....

Yellowjeans @ 7/21/2003 4:47:23 AM #
I agree that Sony products are usually overpriced, but I'd still buy them for their innovative and attractive design. When you place a Palm PDA together with Sony Clie, it reassures me that my decision to buy the Clie is correct!

AustPlam-wannabe @ 7/30/2003 9:11:40 AM #
Well, spare a thought for those who are in Australia also. You can get a T2 from the States for US$399 and the best price I can find ordering from the States was US$349. Which is $530 - $607. Here in Australia, they are selling it for between $699 to $799 !! I ain't even going to compare the pricing of the CLIE.
Seriously, why is it that the MORE advance 'automated assembling factories' get, which equate to less labour payment and all, the MORE expensive goods and services get ? -- if you talk about researching and development, Hmm.. right, add in extra 16K RAM, fix up a faulty button that got past quality testing and call that research ? *grin*
Ooo yeah, a Palm T tessentials kits that sells for US$29 (AUS$44) is selling for $99.

And why seperate media storage and file/program storage? Just lump it all togther.

"The models have a total of 104 MB or RAM. Of that 16 MB is available for traditional storage of files and programs, another 16MB is used for the dynamic heap. Another 16 MB or non-volatile memory is dedicated for system back up to save the contents of RAM when the battery is low. Finally there is an additional 29 MB available for media storage, that acts as a traditional memory stick."

Maybe... why else would they need 16MB of non-volatile memory, but only for "Backup" in case of low battery?!?!

perhaps this can be fixed with an OS update?

What is X? Is that ROM software?

Then Sony is falsely advertising. 16 MB non-volatile RAM? Is there such a thing? I think that's most likely Flash storage space, not RAM. The multimedia files for 29 MB, okay, and the dynamic heap taking up 16 MB, alright. But then ROM occupies the other 30-some MB? Well call me crazy, but then they should advertise the NX series as having 64 MB RAM. 16 usable, 16 heap, and 32 ROM.

My new NX80 has 32MB RAM, 16 for the user/program storage, 16 for system overhead/heap. All of the Sony apps are in ROM, but the protected RAM helps some of them (Netfront browser is one example) run more efficiently, without having to fight for volatile memory with the apps stored in RAM.

You can not count the SRAM in the processor, that is stupid. Because you can not store independent data inside such memory for as long as an user wanted.

A PDA should only be rated by the size of usable RAM, which is 16MB. That's it!

Otherwise why not store other files & run progs from it?

That is exactly my point. Its all a marketting pitch for the really challenged.

abhinay @ 7/21/2003 9:17:43 AM #
Actually, I think that the actual memory accessible to the user is 16+29 = 45MB. the 29 is essentially RAM which is non-Palm like RAM where you can store only PRC and PDB files. Essentially, its like having an Extra Mem Storage of 29MB permanently plugged in. It is actually RAM, but the OS is fooled into thinking that it is external memory, hance allowing you to store multimedia files as well as normal Palm files. Sony figured that people wont use more than 16MB of Programs. WHat they'd want is space for their Video CLips and pics wtc... which is why they gave that 29 MB of "FREE Usable" space.... which is RAM, but more usable than standard PalmOS RAM.

i myself would buy the nothing special model

Play MP3's from a bluetooth or wifi attached drive?

This question isn't directed at the UX50, but Palm devices with WiFi built in in general(I think). So anyways, could I use this thing to play MP3's from a shared drive on a WiFi network? Or what about a MP3 stream from a BT or WiFi equipped laptop?

Since I carry a PCG-U3 notebook in my bag, which is too cumbersome for me to use as an MP3 player; this would solve my insatiability for virtually unlimited storage of MP3's, videos, etc.; yet is still a really small package that can stand alone without the connection to the notebook.

I stopped using my Palm i705 months ago and haven't been keeping up with the latest wireless technologies and their implementations in palm devices...

RE: Play MP3's from a bluetooth or wifi attached drive?

Not sure on the throughput possible on these PDA 802.11 implementations though. I thought the T/C was quite a lot slower than the 11Mbps attainable on a desktop or laptop. Maybe it wouldn't be fast enough for streaming 128Kbps MP3's... It'd really suck your batteries dry too, WiFi and MP3 decoding constantly.