Are you a news junkie or looking to a mobile way to keep up with news from all over the web? Many sites use rss as a way to share headlines and content. PIC takes a look at some options for using rss with your mobile device. 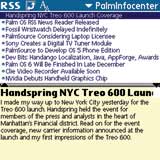 RSS, which stands for really simple syndication, are automatically updated xml news feeds that store headlines and news briefs from many popular news sites and blogs. It has become the de-facto way to share headlines and content, and many websites large and small offer the news feeds for free.

Stand Alone Readers
QuickNews is a rss client that allows you to download feeds, via a HotSync or using a direct internet connection on your handheld. It is definitely one of the best options out there and has been out for a long time. It has a 30 day trial, and sells for $14.95.

Another option is the colorful and animated application called Ticker. The app will scroll feeds across your screen, just like a news ticker.

RSS Aggigators and Offline Readers
For non wireless handhelds or for grabbing rss feed during hot-syncing, you can use the JPluck X document converter and the Plucker viewer. JPluck X converts many documents and text, and also handhelds rss feeds. It relies on the open source doc viewer plucker to view content. There are version for Windows, Mac and Linux operating systems, but only the windows hotsync conduit will automatically convert content.

Another option for Mac users is the recently updated NewsMac 3. The free donation-ware app is primarily a RSS aggregator application for OS X, but also includes the ability to sync headlines to a Palm Powered PDA or iPod. The program works in combination with the iSilo document reader and converter to transfer rss and view headlines.

PalmInfocenter's own RSS feed can be found here.

On a more serious note, I'm still not jumping on the RSS bandwagon. I can see its use for something like Watchster, but even then it's a little shaky. PDA247 will update when there's a new skin for ZLauncher, and PIC updates maybe twice a day. I always see like seventeen news bits in a row from the same two sites.

Who knows, maybe I'll get on the bandwagon one of these days.

As to RSS feeds, I don't know if I'm just having one of my non-tech moments, but everything seems to be getting a little too complicated. I'll be holding off on the RSS for a while too.

And why is the screen snap so small? Why not a link to a larger one?

RSS is a nice concept

As of user experience, does RSS only contain text? Sometimes it is not interesting to read a news without any picture or photo? For me, I would rather surf the web site, which is more appealing to read.

Well yeah, of course you would. The point of RSS is to save you the trouble of going to the site itself until there's something you want to read.

For a site that updates often daily like Engadget or Gizmodo, it's nice to know when the updates come as opposed to having to browse to the site itself.

Helpful when you are working to have a small app that polls RSS feeds. On a handheld it would save time since GPRS and CDMA speeds suck so bad.

User study, after user study has shown there is a trade off between a users amount of use vs. their ability to control the content. While the media puppetmasters would love to have a totally passive society taking anything they say as they want it, most American and thus western culture is not like that.

With that, RSS is a good protocol as long as the end user can pick and choose the media feeds they like. Most off all, the user needs to control when data comes into their devices. If this gets hijacked by the media barons like the old push start-ups of five years ago did, it is doomed.

I wish, though, that I had more control over the amount of information that is downloaded. For example, some RSS feeds just give you a few lines from the news item. Sometimes this is not even enough to figure out what they are talking about.

If I have the space and a fast connection, then I would like to have the whole article, including comments. I see no way to control this. I think it is controlled by the news feed side instead of the user side. Maybe PalmInfoCenter (and others) could provide a link to a higher bandwidth RSS feed that does this along with its current low bandwidth feed.

Vidge @ 3/9/2004 4:05:52 PM #
Had it not been for HandRSS, I wouldn't have known this topic was being discussed here - at least not until much later this evening. I really like being able to grab headlines when I'm away from my computer, accessing the articles that interest me.

EricSmith @ 3/9/2004 4:12:51 PM #
There is a newspaper I like to read, but they don't have a PDA-friendly version of their site. That makes it hard to have a good Palm/offline experience what with all the banner ads, tables, extra graphics, etc. They do, however, have an RSS feed which gives the headlines, the first little bit of the article, and a link to the complete article. Unfortunately, the linked-to article had the same problems as the main site: no PDA friendliness. Using JPluckX, though, I could translate the links to point to the printer-friendly version of the article, which was great for viewing on my Palm.

Not the most straightforward process, but once I set up the tool, the RSS provided me a way to get a nice clean version of the site I wanted.

Gar @ 3/11/2004 9:39:03 AM #
For those that love Leo on TechTV, you can use this RSS tool to grab his daily news from his feed (via leoville.com). I like this app for grabbing news from RSS feed sites on the go. AvantGo isn't covered by everyone anymore as they charge for the Web site side of things, and you have to sync your whole list of AvantGo channels instead of doing just one and then disconnecting.
RSS feeds are becoming more popular for PHP sites as modules are out there to ease the set up.

jackl @ 3/9/2004 4:22:22 PM #
I have been using JPluck and Plucker on my T3 to follow a few sites and blogs a la a customized, personal Avantgo for your own "custom channels" (I use that too). I have never been able to get some features of the software to work (unattended updates at a pre-set time), but it works OK with manual updates.

JPluck is open source software which is not for the computer illiterate or faint of heart. Recently, I tried to update to a newer version of JPluck, and ran into probably the most brain-dead upgrade procedure *ever*.

The new JPluck maintains your sites database in a slightly different format. However, instead of working the way most software would -- importing your existing v.2.0 database and saving in the new v.2.1 db format, JPluck requires you to go into your JPluck directory and manually convert the db file to the new format with some kind of standalone Java command line driven utility.

Well, that's kludgey enough, but have you ever tried to open an MS-DOS window under Win XP Pro and then change directories to a target directory where you can run some conversion software? Well, it would take a better man than me to figure out how to manually move around directories when they're all these Winblows things like [Documents and Settings] and [Program~1]. I couldn't move the target files to the root or desktop or some place findable for the command line utility to work.

So, on account of this "upgrade", I'm not using Plucker at all right now and have moved on to play with some other software that does work.

Nepherim @ 3/9/2004 7:58:50 PM #
Totally disagree about jPluck. It's one of the best pieces of software I've seen for the Palm for a long time. It works great with Plucker, and all the features you need are there. The writer has spent a lot of time working on features to make management of libraries simple.

Yes, the ugrade procedure was command line based -- no it wasn't that tough. It gets done once per user.

Auto-update works great for me. Set a time for each channel, make sure the global settings are set to allow update during the appropriate times, and make sure you leave jPluck running (it can minimize to the taskbar).

The only complaint would be the lack of documentation, but it's coming, and it's generally pretty intuitive.

jackl @ 3/10/2004 11:04:27 AM #
Well, maybe the upgrade wasn't that tough for you, but I'm far more competent that the average user and totally disagree with you that running any updater that runs in an MS-DOS window on a Win XP Pro box is an easy task.

As I said in my post, I tried for an hour to navigate to the correct directories in the MS-DOS window without success, then tried moving the target files to where I could work on them (desktop, root, etc) with again no success. So, yeah, it should be totally straightforward, but it's not, because command line DOS programs just don't co-exist too well anymore with Winblows more 'advanced' versions.

And why the software 'upgrade' could not have antipated this db format change and open jxl v2.0 files and saved them as 2.1 files without the need for an external db updater program is still a mystery to me.

I'm glad you were successful. Perhaps better documentation with some other way of updating the files (maybe something non-command line driven that works under Winblows or the Java controller or whatever) might be helpful for obvious lusers such as myself.

Read any websites and RSS feeds on your PDA with Mobipocket!

have been developped to help anyone to get any websites on the PDA/smarpthone.
You can extract content from standard websites, mobile channels (AvantGo channels, or PDA-optimized websites) and also RSS feeds.

The Mobipocket eNews Creator (http://www.mobipocket.com/en/DownloadSoft/ProductDetailseNewsCreator.asp) is a pure WYSIWYG Interface, with built-in Web Browser.
You can instantly preview your channel with the Mobipocket Emulator.

NewsMob works with your existing Palm or Pocket PC web browser (no new software to buy or install), sync or live, to provide you access to your favorite RSS Feeds.