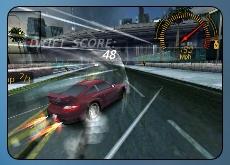 Wow. Either Palm are a lot further along with that much lusted-after Pre GPU support than we all thought, or PreCentral forum member casperstar is laughing his butt off as he perpetuates one of the greatest Palm hoaxes of all time. The aforementioned poster has published a video (since taken down and then re-uploaded by another helpful person) of what he claims is a version of Need For Speed for the Pre, which utilises the GPU. In addition, he's also posted shots of what looks like a secret internal Palm App Catalog, with 495 apps in stock.

If it's true, then this is intriguing for several reasons: first and foremost, if Palm does indeed have a native SDK out there (and this sure doesn't seem to have been coded in Javascript), then why aren't the rank-and-file of webOS developers being allowed access? Video after the break, along with the leaked screenshots. 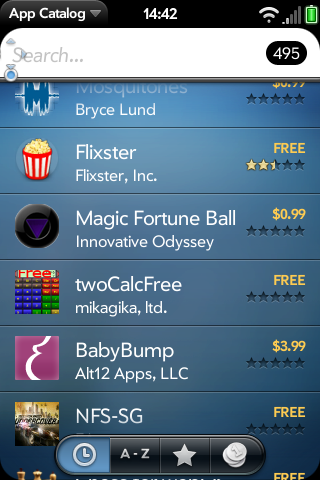 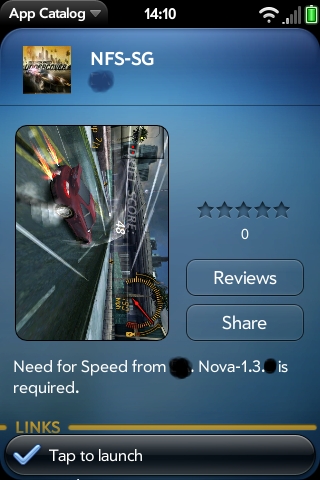 Thanks to PreCentral for the tip.

I think that this might be Flash based. Adobe needs hardware / GPU access anyways to provide a decent version of Flash for mobile devices.

I'm pretty sure they're working closely with Palm. In the end, with providing Adobe with the necessary means to adopt Flash to the Pre, Palm practicaly gains a second, way more powerful way of writing applications for their platform. Wanna make a simple application just displaying some data or information, go for HTML and Javascript. Want to make something performant with hardware accelerated animations and stuff, just do a Flash-based application.

In addition, assunming that the mobile version of Flash will be nearly as powerful as the desktop version, this might even render the need for a better SDK from Palm obsolete and would furthermore allow thousands of existing Flash applications to be ported to the Pre relatively easily. Might that be what Palm has been planning all along?

I DO think that Flash running on the Pre's hardware is powerful enought to build a game such as shown in the video.

That does make sense - I remember Tom Conrad speculating that Flash would be the way Palm would jump for webOS gaming back in January. Maybe he was on the money...

I would not be surprised that there is a native SDK from day one. My guess that some marketing puke has decided to go the Nintendo route and only make it available to companies of "reputation and achievement" thinking that this will make more revenue than handing it out to the masses. To make the "unwashed masses" they get script kiddie code.

The history of this business has shown time and time again that two tier marketing based on company name and past record does not optimize revenue. In fact, it holds it back with said companies of "reputation and achievement" delivering lesser performing code with their name and IP not making up for lack of sales.

OR: it just isn't quite ready yet. What everyone seems very willing to overlook is that WebOS is an immature platform. It will take some time for palm to get everything production-stable

I don't buy that. There is a lot of thing happening that any good independant developer could live with to get the app done by now.

The Palm OS emulator has been out for over six months now and there are other "elite" types getting access to it. I'm personally convinced they are trying to shove out the little guy under the direction of some MBA having Lemon Drops with their classmates at cooperating companies. I highly doubt that Palm will ever get back the fanatical developer base they used to have.

P.S: To that one person whom I know your favorite drink is a Lemon Drop, you should not talk business too much at those swank bars up in Palo Alto.

Apple is not evil. iPhone developers are stupid.
http://www.quirksmode.org/blog/archives/2009/11/apple_is_not_ev.html

You may be just bitter for betting against the iPod ten years ago. I may be wrong here.

Honestly, if there is anything I don't trust it is Palm's mercenary app store. If you read the app store agreement, you are putting yourself in for manipulation.

There are a lot of developers that are not going webOS on this. Is giving kickbacks to app store managers payola?

I could do that with a little pre-planning too. That the best fake I've see in awhile!!!

Good Job, you got everyone talking :-D
ScottG

I don't think there's any question but that this is a fake. The more interesting thing to me is that the edges of the picture seem to be squared off, rather than rounded, as they are on the Pre's display.

I don't know how it was done, but even leaving aside the graphics issue (which it's always possible they fixed on this "new" update), the screen doesn't look right to me.

Oh please. Here is synchronized video on an iPhone:

Like I said, the video is obviously faked. That's not what I found interesting. I'm more curious about how the video was done in the first place. The edges of the screen in the video are squared off. Every video I've ever seen on the Pre has rounded edges. Even a black background in the video should be lighter than the black rounded borders.

As a fake of a video game, it's not that impressive to anyone who knows anything about WebOS's current state. But I do find it interesting as a video edit.

bhartman34 wrote:
I don't think there's any question but that this is a fake. The more interesting thing to me is that the edges of the picture seem to be squared off, rather than rounded, as they are on the Pre's display.

I don't know how it was done, but even leaving aside the graphics issue (which it's always possible they fixed on this "new" update), the screen doesn't look right to me.

I'll leave the question of whether or not this video is fake to the experts around here. But I think I should point out that squaring off the edges of the Pre's screen can by done via homebrew tweak with Jason Robitaille's QuickInstall utility.