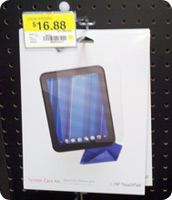 The first of what promises to be a flood of 3rd party accessories for HP's upcoming TouchPad has just landed at retail. I made a quick trip to a local Wal-Mart this afternoon, which has already been clearing space for the TouchPad, and was surprised to find a Griffin TouchPad screen protector kit located on the aisle opposite the empty TouchPad display and shelf tag.

The Griffin Screen Protector was packed with a screen cleaning cloth and priced at $16.88. In addition to the TouchPad version, similar matte-finish Griffin screen protectors were also available for the RIM Playbook and several Android tablets. No other TouchPad accessories were on display, HP-branded or otherwise. 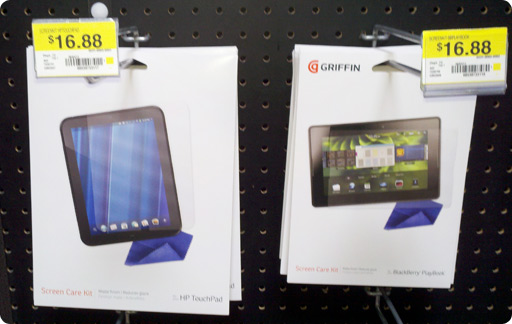 At least HP is taking the roll-out of their TouchPad seriously, right?

It looks like it. It's really weird to see too.

I'll be interested to see what actually comes bundled on the device, Skype, printing etc. That, and how many (type) apps and how the smartfones and tabs share info are the wildcards remaining.

They need enough apps to get consumers interested and pique dev / corporate interest. They are still behind the Apple juggernaut, but if they can leverage their enterprise muscles and capitalize on their scale, then WebOS may survive and thrive.

** Hey HP, I'm going to dig up my old dead horse and beat it again: Get rid of all that ridiculous bezel space and push a larger screen (or smaller device) as close to the edge as possible. This = instant design advantage over the #1 guys. Ahhh, go ahead and toss it in File 13 that Palm still has somewhere. They never listened in 8-9 years either. :-)
Pat Horne

why would you want buy a webOS device and be stuck out there on some lonely tiny proprietary island all by yourself?

can someone explain to me the scenario where some country bumpkin walks into a Walmart and sees an IPad 2 for $499 and a TouchPad for $499 and chooses the TouchPad?

First of all, HP will offer ONLY the 32Gb TouchPad SKU at retail (at least initially), which will likely be the first of several fatal blows to its fortunes. The "average Joes" that are buying these things likely see ONE price and turn away. Everyone I know, hillbilly or CEO, who owns a tablet has always always bought one of the cheaper SKUs. I know ONE guy with a 32Gb 3G iPad 2. Everyone else I know has a 16Gb version. And the two people I know with Honeycomb tablets bought wi-fi only versions of the lowest available memory config.

HP is making almost the same exact mistake as Moto did with the Xoom launch. You NEVER launch your most expensive SKU first. You launch several different models and undercut Apple by $50-$100 across the board. I will wager that the TouchPad's BoM is no higher than the Asus Touchpad. Does WebOS really add that much cost to the device? $399 is the new standard for quality, name-brand 10.1" Android tablets. The 10" Touchpad SHOULD be ringing in at $399, $499, and $599, respectively.

Anyway, Gekko, a couple different scenarios to answer your question:

#1 Wal-Mart is sold out of iPads

will said bumpkin be wanting to edit Office docs? will enterprise?

is it fun to be trapped on some lonely tiny proprietary island all by yourself?

Doesn't matter if the touchpad is the same (or $100) less than a comparable ipad.

Let's see what the incentive is to purchase one over an ipad 2?

2. Touchpad has real multitasking - for 95% of the people out there, Apple's current task switching paradigm appears to be fine.

Gekko you've chanted the word proprietary to the point of inanity.

It's my understanding that WebOS can sync email, contacts and calendars with Google and Microsoft Exchange, in that respect it's no more proprietary than Android or iOS.

proprietary = same company makes both hardware and software (not Android).

lonely, tiny island = nobody else is buying (not Apple or Android).

You guys think a USB 2.0 SD reader would work in the TouchPad's micro-USB port?

I'm pretty annoyed that Hp went the Apple-route and omitted a reader. Seems so short-sighted to forgo such a useful feature in hopes that your users will be forced to upgrade when they run out of space (or so I've heard is the mentality from defunct Apple retail employees).
Tungsten T --> Palm TX --> TX & Centro (Good combo so far!)

No, WebOS does not have USB host capabilities at this time.

Furthermore, I do not know of any SD card readers that utilize a microUSB port. That's why more and more Android tablets are shipping with fullsize USB ports so the user can utilize various thumbdrives, card readers, external HID devices and even a portable HDDs if the port can supply enough juice.

-It costs less (in both hardware & software engineering resources). Despite Palm being an early pioneer of thee SD/MMC standard, removable storage has been missing since day 1 of WebOS and I see no sign of this changing in the future.
-It's hipper/cooler/trendier to not have a memory card slot
-It's more "secure" as far as coprorate IT is concerned
-It forces users to go the Apple route of having to buy new hardware if they need more storage, thus more sales in theory for HP
-It appeases HP's carrier partners (in an eventual WWAN TouchPad or a wi-fi TouchPad tethered to a hotspot or smartphone) by forcing users to keep more in the cloud, thus incurring more data charges since everyone is moving to tiered data.
-HP feels it will give users more incentive to go with their forthcoming cloud music program.

Toshiba is really the ONLY company going after the tablet market properly and treating them as scaled-down netbooks: the Thrive has a fullsize SDHC/SDXC slot that lets you add gobs of storage, a removable battery for high-capacity or replacement down the road, and fullsize USB port for attaching external devices. THAT is the way to do a proper tablet IMHO!
Pilot 1000->Pilot 5000->PalmPilot Pro->IIIe->Vx->m505->T|T->T|T2->T|C->T|T3->T|T5->Zodiac 2->TX->Verizon Treo 700P->Verizon Treo 755p->Verizon Moto Droid + Verizon Palm Centro-> Verizon Moto Droid X + Palm TX

Toshiba is really the ONLY company going after the tablet market properly and treating them as scaled-down netbooks.

It remains to be seen if what you consider a "proper" tablet has any sort of market at all.

There's an ipad market, but is there a tablet market?

HP's trying to beat Apple at their own game may be the only way to go, but execution has to be flawless.

A fullsize SDHC/SDXC slot that lets you add gobs of storage, a removable battery for high-capacity or replacement down the road, and fullsize USB port for attaching external devices. THAT is the way to do a proper tablet IMHO!

It appears the market disagrees with you.

WSJ: You've been back as CEO for four years now. What has surprised you the most about the evolution of the tech industry in that time?

Mr. Dell: I'd say [the] rapid rise of the tablet. I didn't completely see that coming.

Tablets aren't really new, in the sense that the tablet PC idea's been around for a while. Obviously, more recent products have been much more successful.

What's interesting [is that] business users are not going to give up smartphones. Won't give up PCs. So now you have a PC, you have a smartphone and you have a tablet. Sounds pretty good. Industry growth.

What's also interesting is Apple's great success with the iPhone. Android comes along, even greater success. I think you'll see the same thing on tablets, with enormous numbers of Android tablets with Dell certainly playing a role in that as well.

Mr. Dell: Not tomorrow. Not the next day. But again, if you look at 18 months ago, Android phones were like, "What is that?" And now there are more Android phones than iPhones. I don't see any reason why the same won't occur with Android tablets.

Add this to Dell's comments and it shows what a true visionary he is:

"What would I do? I'd shut it [Apple] down and give the money back to the shareholders," Michael Dell said before a crowd of several thousand IT executives.

yeah yeah yeah fanboy. everyone is familiar with that quote.

never fall in love with a company (or a stock).

COVER STORY June 22, 2011, 11:01PM EST text size: TT
The Rise and Inglorious Fall of Myspace
It once promised to redefine music, politics, dating, and pop culture. Rupert Murdoch fell in love with it. Then everything fell apart

Everyone may be familiar with the quote, but it goes to show I wouldn't put too much stock into anything Dell says.

TABLETS June 23, 2011, 5:00PM EST
HP's Plan to Make TouchPad a Hit
The PC giant's Wintel-free tablet is part of a big gamble that began with the purchase of Palm's webOS: to build its own ecosystem

bestbuy commercials have been pushing the playbook.

if touchpad also bombs, we can expect bestbuy commercials to start hawking the touchpad in a month or so.

I think it's safe to say the Playbook has bombed spectacularly. HP's TP is almost certain to outsell the Playbook.

when you see one in the wild let us know.