Updated: New information added at the end of this article on Saturday, September 23.
Last week, some other Palm sites ran a picture of a mystery clip-on device for the Palm V series (with an IBM Workpad in the pictures) with a request for anyone to send in details if they knew the source of the picture. Well, the mystery has been solved. It is a picture of the HATcker, a module that fits onto the top of the V series and, by communicating with the infrared port, lets the Palm connect to a keyboard and do other functions, too. It is currently under development by TAPSPRING, a Taiwan-based company. 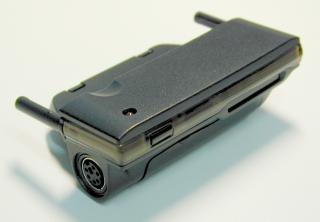 Update: The TAPSPRING site is still under development but I was able to get in touch with Harry Chou from TAPSPRING and got more details.

The HATcker isn't a single device; it is instead a series of add on modules specially design for the Palm V series. Every one in the series will come out with Keyboard connector by default and some other function in its expansion slot.

The first one on the market will be a keyboard connector and a blue flashing alert light in the slot that will be released around December.

Update 2: They are still not yet sure what any of the HATcker modules will cost but Mr. Chou is certain the first one, the keyboard connector with alert light, will be less than $50.

Whats the card sticking out of the top?

RE: Whats the card sticking out of the top?

RE: Whats the card sticking out of the top?

Pleas take a look at this. This is a picture from a famous Palm site in Hong Kong.

The slot on the top believed to be for SD memory card.

If it can connect IR modem, printer (off course those don't support IR). I think it should be of greater attraction.

I.M. Anonymous @ 9/24/2000 5:38:02 PM #
it actually doesn't free up the serial port because while using the IR port the serial port
is disabled because there is only ONE IRQ alloted for both. In fact, if you DO try to use
both simultaneously, you WILL cause an I/O error and crash your Palm

mknowledge @ 9/22/2000 4:44:48 AM #
Not sure I understand the value of the keyboard connector... with keyboard devices already available - i.e. Palm StowAway. BUT, the SD card i/o is a definite plus. This feature seems to be understated on the web-site, however.

Ed @ 9/22/2000 10:24:53 AM #
While I think many people do need a Stowaway keyboard, I think most would be happier with a connector to a regular keyboard. Before you fire off an angry reply, look around you. I'll bet there is a keyboard right in front of you. Why would you want to buy another one? I have a HappyHacking cradle that I love. Naturally, if you already own a Stowaway, this isn't for you.

Whether this is a success or not will depend greatly on price. A keyboard connector that costs as much as a miniature keyboard won't catch on.

Ed @ 9/23/2000 8:50:25 AM #
I am writing this mostly to call attention to the fact that I just updated the article because Harry Chou told me the first module would cost less than $50. That's the one that is a keyboard connector and a blue flashing alert light.

This is great news. Most Palm V add-ons seem to be well designed and stylish but cost about 50% more than their Palm III series equivalent. A clip-on module for less than $50 would be most welcome.

mknowledge @ 9/23/2000 4:49:24 PM #
Good point on the easy availability of the standard keyboard. My perspective is one of a "road warrior"... convenience and portability at any cost! Well, almost... the price of the StowAway is affordable enough to give mobility in small form factor... i.e. briefcase, attache, backpack. What I really value is the SD card i/o, however. There is always a need for more memory =8-)

what's the round thing?

I.M. Anonymous @ 9/24/2000 6:28:40 AM #
i wonder what's the cylindrical thing under the device?batteries? i think it would be MUCH better if they took that out and leave only the card slot. or else it would spoil the outlook of the palm v!

RE: what's the round thing?

Ed @ 9/24/2000 8:49:33 AM #
Sorry, that cylindrical bulge is needed to put the battery in, as you guessed. If you take a look here:
http://www.tapspring.com/morepicture.htm
you will see the module with the battery port open. As the HATcker isn't connected to the serial port, there is no way for it to draw power from the Palm so a battery is absolutely required.

I'll be a happy man when there are a few more advances in batteries and they get a lot smaller. I'm hoping for something about the size of a watch battery that can power an add-on for about 20 hours of continuous use.