Palm Digital Media has released a new version of its ebook reader, now called the PalmReader Pro. It supports sub-pixel font smoothing on color handhelds. It can also use any Palm standard bitmapped font. This app also has hi-res support and can display color images. It comes with Webster's New World Vest Pocket Dictionary, allowing users to hold their stylus on a word and its definition pops up. It is available now for $10.

This program reads Palm DOC files as well as Palm Media encrypted ebooks, and can reads files off a Memory Card. 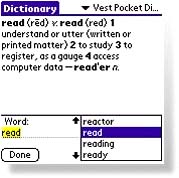 If more is needed, Webster's New World School and Office Dictionary is available for $8. It has over 58 thousand entries and includes many of the most widely used scientific, technical, professional, and business terms. It requires 2.5 MB of free memory.

Webster's New World College Dictionary, Fourth Edition has over 160 thousand entries and must be run from a memory card because it uses 12 MB of memory. It costs $24.

Agfa Monotype has released the Agfa Monotype eBook Font Pack for the Palm Reader Pro, which contains three fonts designed to optimize legibility. It includes four sizes for each bitmapped font. and costs $15. There is a $20 bundle with Palm Reader Pro.

"A choice of fonts is one of the most requested features from users of the Palm Reader," said Mike Segroves, director of business development for Palm Digital Media.

"This is an emerging industry, and the steady growth that we are experiencing shows that there is a great deal of interest in eBooks,'" said Mr. Segroves. "We average 1,000 new customers a week -- a clear indicator that handheld computer users are adopting this technology."

Thanks to Dwayne Wilson for the tip. -Ed

mikecane @ 1/3/2002 11:21:43 AM #
So, Palm finally wakes up and smells the "font coffee." I don't think Agfa Monotype would go to all this trouble just to sell to Palm Reader buyers. I think this hints at real fonts being in PalmOS 5 too. Good news!

bcombee @ 1/3/2002 1:30:08 PM #
I just got the new Palm Reader Pro. I've tried out the font smoothing, and I don't think its for everyone. Since its just applying smoothing to existing bitmap fonts on the device, it doesn't actually add any resolution to the text -- it just eliminates some of the sharp edges. On my Prism, I prefer having it off, although it may offer more benefit with other displays.

I think this has potential, but it really needs custom fonts designed for the process (perhaps the AFGA ones) to give something that looks great.

Wordsmith uses the same sub-pixel font smoothing and it also doesn't look all that great on the Prism. The Prism's infamous black grid interferers too much.

On the other hand, not everyone is all that enamoured with the font smoothing thing. I've heard complaints that it just makes the fonts look fuzzy no matter what model thay are on.

I.M. Anonymous @ 1/3/2002 7:01:57 PM #
Finally, I thought I was crazy. I have seen clear type on a PPC and I like the text better without it! It is supposed to smooth text, but at small sizes it just looked murkey and at large sizes you don't need it.

I wonder if it will go away and I also wonder if all those reviewers who bought all the Microsoft PR bologna will apologize.

Ronin @ 1/3/2002 12:16:44 PM #
Does not look like there is a trial version. I discovered this last night and if the Palm Digital site has a demo download it is well hidden. There are no downloads for PalmReader Pro at Handango or PalmGear (although the font pack was posted on PalmGear - w/o a demo).

However, I am seriously considering purchasing the program sight unseen because I am intrigued by the improvements, use the freeware PalmReader frequently and consider it an extremely high quality reader that is well supported, also I am all for supporting e-books in the manner which Palm/PeanutPress has decided to sell them. With this in mind, the price is quite reasonable.

Right now, I have decided to hold off until some reviews pop up on the web but might not wait if it takes too long.

I wasn't using the Palm Reader for several weeks now, because I was so amazed by the WordSmith font smoothing; it's just that I bought zillions of books at peanutpress which I can ONLY read with the Palm reader. I guess I can finally start reading my "paid" books... ;-)

I.M. Anonymous @ 1/3/2002 4:02:02 PM #
I think it actually works much better then any other available reader (Wordsmith and DeepReader).
The fonts look great and enhance the reading experience.
But what's most important: very stable and solid support of VFS. (Even though I don't approve of buying software w/o trying it first).

I.M. Anonymous @ 1/3/2002 11:15:46 PM #
I bought it even though there were no real up close screenshots because I was looking forward to antialiased fonts.
Well, these aren't antialiased fonts like DeepReader's
Times or MobiPocket's fonts, they look just like blurred blocky bitmap fonts.

I have already deleted the app from my palm, and will
continue using DeepReader to read fictionwise.com
books until Palm Reader Pro reaches that level of antialiased text, and has full justification like DeepReader and MobiPocket.

Anonymous that does not like, what device are you using and were you using the Palm standard fonts or the Afga fonts?

their answer was: "thanks for your interest in our product. we will forward your suggestion to our developers."

6 months ago i suggested to fix a "bug" that would prevent you from using a app/da launcher while in palmreader. (i used this to quickly switch from reader to dictionary).

their comment: "it is not recommended to use hacks with palmreader"

yeah - now i know why! - you had my old idea already in the making and this is a smart way to prevent users who found another way to quickly access a dictionary from doing exactly this.

otherwise you couldn´t charge for a reader with dictionary acces.

thanks palm for using my idea - you could at least have notified me and given me a free one of palmreader pro.

now i´ll get it through other channels and will be happy to distribute to my buddys on all continents.

And I recommended to Microsoft that they should make w GUI interface for DOS way back in 1980...and they charged me for MS Windows!

RE: gui for dos

I.M. Anonymous @ 1/3/2002 2:45:16 PM #
... and don´t you gui-moron think it´s strange that palm disabled the possibility to start a app/da launcher (which is btw possible with every other application) while using palmreader.

in older versions (peanutreader) i could switch between reader and a dictionary with a single grafiti stroke which was quite comfortable.

does anybody know a good reason why this possibility was killed?

Berliner @ 1/3/2002 4:18:56 PM #
Maybe you guys should look at the program first before doing any assumptions (that's true for the previous Anonymous poster as well as the Gerk [just invented a new word: German Jerk]):

I AM able to use another popup dictionary and hacks while using the NEW Palm Reader (McPhling, for that matter). And I am able to switch to another appliaction and back with one keystroke just like before.

So if you don't know what you're talking about, don't complain.

Clue; next time you get an idea that you really think is innovative, do something about yourself and make a ton of money, or quit your whining. Nobody owes you anything for your good ideas - they're a dime a dozen. Execution is everything.

I.M. Anonymous @ 1/3/2002 1:50:06 PM #
Am I the only one who is surprised that they are charging for this at all? I always figured Palm was planning to make its money off the Peanut Press purchase on the ebook sales, not the reader. What's the point of placing a $10 hurdle in front of access to the ebooks themselves? Presumably this will be packed with Palms in the future.

I.M. Anonymous @ 1/3/2002 2:36:49 PM #
Yeh, the freeware version is still available - as version 1.1.4, which includes some recent bug fixes. The basic Palm Reader is pretty good. My only complaint about it is that you can't use the standard 'bold' font to read text - the normal font is a bit small for me and the 'large' font halves the amount of text on screen. I've tried to use FontHack as a workaround (eg to substitute the 'bold' font) but Palm Reader seems to format ebooks on a words per page basis, so you actually end up not being able to read some of the text at all. Come on guys, why can't we have the good old fashioned 'bold' font?

I.M. Anonymous @ 1/4/2002 3:48:39 PM #
If you use the basic Palm Reader you can improve the text using Fonthack 123 and a font called "Tall Fonts New" in place of the standard font without loosing some text in the reader. This is the only font I found would do this, fortunately it's a nice one too.

I.M. Anonymous @ 1/3/2002 2:39:51 PM #
Even with this new and improved (and not free) Palm Reader Pro, they STILL haven't given users the option to hide the toolbar at the bottom of the screen. Do they really think palms have such large screens that they have the luxury to WASTE screen space?