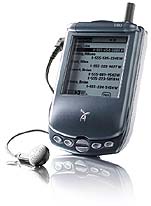 BTCellnet is a division of of mmO2, one of Europe's largest mobile companies. Other divisions include Viag in Germany, Telfort in the Netherlands, and Digifone in Ireland. All of these will eventually carry the Treo.

Several days ago, Handspring and SFR (Groupe Cegetel), a French provider of mobile communications services, announced that they will jointly distribute the Treo line in France. It will be available at the beginning of April at retail stores throughout the country and Handspring's French webstore.

The Treo line was released in Hong Kong and Singapore last month. The company is taking orders from its U.S. webstore as well, though the supply is a bit limited.

The Treo 180 line is made of of several models, all of which have integrated wireless capabilities allowing them to handle both voice and data. The Treo 180 has a built-in keyboard while the 180g uses Graffiti for text input. Both of these have monochrome screens. A color version is planned for later this year.

These smartphones use the GSM standard, which has almost 100% coverage in Europe and is widely used in Asia. The U.S., on the other hand, has a hodge-podge of wireless standards and GSM is available in only a few areas. Handspring is working on a CDMA version of the Treo for the U.S. but it is not yet available and the company will only say it will be out before the end of this year.

Thanks to Huggy for the tip. -Ed

Coverage to this point IS available in more....

I will admit that GSM isn't quite TDMA or CDMA in breadth (in the USA), but Cingluar and ATTWS are switching to GSM.

If so, it seems like any type of coverage is limited to a few (though heavily populated) areas.

You might want try this link, for a list of GSM providers in the USA http://www.gsmworld.com/roaming/gsminfo/cou_us.shtml
seems to show quite a bit more coverage.

GSM is as wide spread in the USA as Sprints PCS network (note PCS network). Additionally, with GAIT handsets coming in a couple of months (TDMA/ANALOG/GSM), this will no longer be the issue. You can thank Cingular and AT&T for this.

Either as a GSM phone, or as a CDMA phone?

I'm in Michigan (one of the few areas with outstanding coverage, according to your map), and I'd like to stick with AT&T.

Also, does this mean Nokia's line of GSM phones (the best ones on their website don't even work on CDMA) will be supported by AT&T???

The maps you pointed me to are harder to use (since they are all on separate pages), and I don't see that they show any more coverage than the link originally posted.

If this trend continues I'm in the market for one definitely.

Currently the price is still a bit too high since I have to buy with a price plan.

RE: handspring - help me

mtg101 @ 2/25/2002 3:30:59 PM #
The GRPS software upgrade is still in development, and will be released 'this summer' according to Handspring, along with other terms like 'when networks have GPRS rolled out'. This sort of talk has washed well in the USA, but in Europe where we all have GPRS available this line is really annoying.

So yes... for now you're stuck with a Palm with BT connectivity and a BT phone (Sony where is the InfoStick???). This changes in the summer with the release of the GPRS update for Treo's (and the color Treo of course). The color Treo with GPRS will go head to head with the Nokia 7640 - a GPRS based Symbian phone with a built-in camera.

Later in the year, around fall, Palm will release a GPRS integrated smartphone based on PalmOS 5.