Use Any Handheld as a TV Remote with OmniRemote Pro

Long before Sony released the T series with a built-in TV/stereo remote control, Pacific Neo-Tek had developed OmniRemote, which let any Palm OS handheld control a TV with its infrared port. The company has now released OmniRemote Pro, which offers numerous new features. It now supports Palm OS 4, color screens, 320 by 320 displays, and thumbwheels. It is available now for $25. 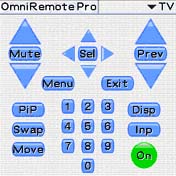 OmniRemote Pro acts as a programmable remote. This means it can be taught to use the IR signal from almost any remote, and not just from TVs. It can be used to control stereos, VCRs, just about anything with an IR remote.

The app comes with several pre-created button layouts but users can design their own, using as many buttons as they like and putting them anywhere they want. There any bitmap that can be put behind the buttons as a backdrop. Multiple button layouts can be stored.

The hardware buttons or thumbwheel on the handheld can be used to control the TV, stereo, whatever. These can be programmed as part of each button layout.

Users can also create macros, which perform a sequence of actions with a single key-press.

A remote control isn't very useful if the signals can't reach the TV. Pacific Neo-Tek did a study on the range of the IR ports on various handheld models. According to it, some models have a truly impressive range, with the m500 and m505 topping out at 50 feet.

Thanks to Jonathan Jackson for the tip. -Ed

Related Articles...
More articles about Software
Use Any Handheld as a TV Remote with OmniRemote Pro http://www.palminfocenter.com/news/3337/use-any-handheld-as-a-tv-remote-with-omniremote-pro/

As for the price, $25 is steep. Perhaps it can be bundled with software that turns the PDA into either a metal detector (to find coins on the beach, with the Fellows "PDA Extension Stick") or wine corker.

Kaitou @ 4/19/2002 10:48:50 AM #
does this, or will this take advantage of the long range IR port found in the T and NR Clie models? I realize Sony doesn't have an API out for it, but it should still be possible to accomplish, and thats the only way I would see it worthwhile for me to purchase.

All you nay-sayers should learn some restraint the next post/article you're about to bash.

I.M. Anonymous @ 4/19/2002 11:01:52 AM #
Too many palm users have this idea that all pallm apps should be $10. Maybe its because handhelds are so small compared to computers you think the software prices should also be much smaller. It's as much work to create a palm as as it does to create a pc app. Maybe more.

You need to get over it. This is keeping developers from writing good apps because they know they won't be able to sell them for more than $10 and its not worth it at that price.

RE: Too Expensive for piece of mind

Dearman @ 4/19/2002 11:09:12 AM #
I used the old omniRemote with my 3xe and m505 I'd be glad to use the upgrade on my M505, anything to keep the wife from flicking channels at subliminal speeds, and the macro functions are worthwhile, besides it can play with lego to

RE: One Handed Usage

I.M. Anonymous @ 4/19/2002 11:43:13 AM #
You can use OmniRemote with one hand since you can program the hardware buttons any way you want to. I use the Date Book and Address Book buttons to control the volume, and the Page Up and Page Down buttons for the channels. No stylus needed. OmniRemote works very well.

You can even share the remote control layouts you create with others. And you get good range with the Palm m505/m515. Very impressive.

RE: not Too Expensive!

You're so confused... Those clies don't HAVE a long range IR port! Previous Clies had a terrible range compared to most other PalmOS devices (see range table on the Omniremote site). Their "long range" IR ports just bring them up to par with the rest of the pack. You don't see Palm hyping about "long range" IR, but for a while it's been the best in the pack. Pacificneotek bench tested to 55 feet (for IR remote purposes, not inter-palm beaming).

I.M. Anonymous @ 4/19/2002 12:54:02 PM #
Somewhere in the PacificNeotek site there was a discussion about the Clie. Charlie Payne, the OmniRemote programmer, explained that the Clie has two IR emmitters, one short range Palm compatable and one long range Sony proprietary. Sony would not give him the API for the long range but he was able to figure it out and has incorporated it into the OmniRemote software. There's a picture in there, somewhere, showing the two different IR LED's.

I.M. Anonymous @ 4/19/2002 1:24:48 PM #
Also, check out ORDesktop.com. They have a Windows program that lets you design OmniRemote screens for download to your Palm device. This software can also convert the Phillips Pronto IR codes and other IR codes for use on OmniRemote.

Kaitou @ 4/19/2002 2:12:34 PM #
First of all, I am not "confused" the T and NR series have a second beam-only IR port not used for data, which is the "Enhanced" one, your flame was pretty pointless. The 55 feet distance is quite misleading, and will by no means indicate performance. If you look at the to cablebox chart, the distances are more equal.

To the person who responded to me, thank you, thats what I needed to know. I guess once my NR comes in, I will be ordering this.

RE: Too Expensive! Let's do it open source !

If you have any idea, post your comments on
http://www.palmopensource.com forums to reach me.

I.M. Anonymous @ 4/19/2002 3:43:16 PM #
Anybody else notice the size of the pdb's that hold the button shapes and sizes? By the time you get done making a cool looking remote control, the thing will use more RAM than Datebk4.

BTW, if you work in an office with IR controlled lights like I do, you can have great fun during boring meetings with this app. Well worth $25. :-)

I.M. Anonymous @ 4/19/2002 7:06:47 PM #
>Too many palm users have this idea that all pallm apps should be $10. Maybe its
>because handhelds are so small compared to computers you think the software
>prices should also be much smaller. It's as much work to create a palm as as it
>does to create a pc app. Maybe more.

It also takes as much (or more) work to design and manufacture handhelds compared
to desktop computers. Does that mean you are willing to drop a couple thousand
dollars for one? Didn't think so...

You need to be careful when using an analogy because, more often than not, analogies are incorrect.

What you are missing is that, for hardware, the cost of design isn't close the the primary cost. In software, design is just about the only cost. While it may cost more to design a handheld than a laptop, a laptop's screen costs about a $1000. Compared the that, the cost of designing the laptop is negligible. Then you have to add all the other parts, many of which cost hundreds, even when bought wholesale. The most expensive handheld screen,s on the other hand, costs about $100 -- $200. Hardware costs determine the price of hardware, not design.

However, I know you were trying to be obnoxious (and succeeding, BTW) but I have to point out that there are low-end PCs that you can buy for less than the cost of a high end handheld.

Well think about the poor guys who were not able to get a refund for their T415. They paid about $300 for a remote control!

waydwnsouth @ 4/12/2004 2:52:56 PM #
MARMOSET is the registration key for OmniRemote 2.02, though i can't get it to work. i get the message "Your OmniRemote Pro upgrade code has been accepted. Thank You." It still shows an experation (now 10 days). Please Help

Why is the Palm m5xx so strong? That's unreal. Palm should've included Remote software with their m5xx PDAs.

Huh? I don't know what chart you were looking at but I see 8 feet. That's pretty weak but 4x better than what you said.

You're quoting the 8ft range for sending to a "Lego Mindstorms" thing.

Altema @ 4/19/2002 12:48:25 PM #
I don't know why they would have it so strong either, then not even mention it in their promos. If you really want to have fun with the range (regardless of handheld model), and you have a MiniDisc deck, check out MD Titler from Ellams Software. It seems like the app overdrives the IR transmitter to boost range. I could get 40 feet out of my old IIIc with this program... I can't measure the 500 series because I don't have any rooms big enough. Anyone want to donate a house so I can test? :)

I.M. Anonymous @ 4/19/2002 10:46:20 AM #
I'm totally certain that no application is used by everyone. If this isn't for you, fine, but criticizing it because you don't need it is pointless. Tell us your favorite program. I'll bet someone will be able to post a reason why they think it's a stupid waste of time. Would that make you stop using it?

Seriously though, my kids keep taking batteries from the remotes, so OmniRemote would be useful for me. Much better than hunting down GameBoys and Walkmans to get the batteries back.

I.M. Anonymous @ 4/19/2002 11:06:51 AM #
I wonder if the software will allow the Treo to be used as a remote but triggered from a phone call. Say, if you're in another state and want to change the channel on your TV, you could have the Treo sitting in front of the TV, call it from another phone, and punch in commands to change the channel.