Pimlico Software has released DateBk5, the latest version of its calendar and scheduling app. The new version includes extensive use of color, including color icons and backgrounds. It also offers a single, large, tabbed dialog for handling all the global preferences and many other improvements. It includes support for the high resolution screens on both Sony and HandEra devices. It is available now for $25. 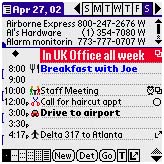 It is based on the built-in Date Book application, meaning that all the functionality available in that app is also available in DateBk5. In most cases, it is also implemented in an identical manner to make it easier to transition.

However, DateBk5 includes numerous other features, like the ability to schedule events down to the minute, far more attributes for each event, floating events, weekly views with either icons or text, and much more.

DateBk5 will run under Palm OS 2.0 or later. It is a large program, requiring at least 600k of free memory.

Thanks to Dennis G. Esler for the tip. -Ed

Just installed it (have been using the beta for the last couple of months), and it works great

Hats off to Pimlico!!!

Is it official that we here at PIC call it Hi-Res+? Just to avoid all the confusion....

I sure hope PalmSource make it simpler in future versions of the OS for developers to support multiple screen sizes so all apps can easily support all screen sizes.

I bet they also tried to hijack other addresses of their competitors.

I think I will stay away from Iambic software until their policy changes.

Cheers,
sundance
----------------
As a power-user of Palm-branded products and a regular consumer of palm-os compatible branded products, I am writing to you to tell you that I am disappointed by your company's policy on registering domain-names of competitor's products to redirect them to your site. This practice is underhanded, misleading, disingenuous and beneath your level as a corporation. I encourage you to surrender all such registered domains, and to discontinue such practices in the future, until such time, I will personally not buy, recommend, or refer any Iambic product in any forum.

I.M. Anonymous @ 5/7/2002 12:51:52 PM #
I agree it was bad of iambic to register their competitor's product names as domain names but it wasn't too smart of Pimlico to not have them registered already. Smart companies register a domain with every product they are working on.

Are DateBk4 or DateBk5 are registered trademarks? In previous court cases, cyber-squatters didn't get to keep a domain name when it was trademarked to someone else.

Should the word immoral *REALLY* be applied here?

Maybe prankster is a better use here...

I.M. Anonymous @ 5/7/2002 1:22:19 PM #
Immoral or prankish, the sad things is that Iambic feel it necessary to take these steps to compete against software that, after all, funds wildlife conservation. Nice attitude!

I'm made my feelings clear in their discussion forums and I certainly won't be using their software or recommending them again.

I.M. Anonymous @ 5/7/2002 1:30:33 PM #
Superior or not (though I do agree that Datebk5 is), to resort to cybersquatting to try to gain an advantage over your competitor and could be the basis of a lawsuit if Pimlico Software is willing to pursue it. This is certainly the most clear-cut case of such I have ever seen.

Just tried the two domain names myself and sure enough you get unceremoniously redirected to the Iambic Actionnames web page.

As shocked as I was by this I was even more shocked at the fact that the thread in their forums mentioned above is gone. This amazes me not only becuase it is very cavalier behavior by Iambic but also because of the remarkable speed in which it was accomplished. I do not know about you guys but the Iambic customer service e-mail responses are a long time in coming.

If they could apply the kind of energy that is being applied to PR to the actual product maybe the heavy handed PR would not be necessary.

Do these developments indicate that the Palm OS development world is starting to attract sharks?

Again, wow! What a revolting development.

IMHO it would be bad enough to use these types of methods against another for-profit company, but to target a charity does not evoke much consumer support to say the least.

Incidentally, it is not necessary to have a REGISTERED trademark in order to invoke the federal anti-cybersquatting laws. Names or symbols used in commerce may be entitled to trademark protection even if not registered, so long as they have become distinctive and associated with their owner. Pimlico might have a decent shot of getting these domain names back.

lets see how long it lasts :)
gee, i've used tiny sheet loyally for a few years, but this is sad.

I.M. Anonymous @ 5/7/2002 2:03:33 PM #
While I agree the domain name hijack is off-base, it's interesting that if DateBK5 doesn't find it's Icon database, it will "look for any resource database with a creator id of Actn" Hmmm, I wonder what product might have Icons saved as Actn? One person's "feature" is another person's "infringement"

I was considering purchasing your product tinysheets, as it supports the new Sony hi-res+ format, but now that I see you have registered your competitors names as domain names, I feel I will have to refrain from purchasing your product. I also feel that I will not be able to recommend them or your time tracking software to the company I work for during the day.

I'm sure you felt that the quality of your product demanded that you respond in such a manner.

P.S. Also becuase you feel like censoring my orignal message, I feel it necessary to repost it.

Patrick @ 5/7/2002 2:08:44 PM #
I'd like to say that the negative publicity generated by forums such as these would serve to steer people away from Iambic. However, I suspect the lion's share of potential buyers don't frequent these on-line forums and will innocently assume that "DateBk5" is just Iambic's shorthand for their "Date Book 5".

Like what it did for others, reading this note disgusted me and one of the first words that came to mind was "boycott".

Moosecat @ 5/7/2002 2:09:17 PM #
My curiosity about slimy cybersquatting behavior piqued, I thought I would see if any nefarious evildoer has registered "www.plam.com" -- a common typo for "Palm."

My fears were confirmed: Evil alcohol merchants calling themselves "Plam Vineyards" have hijacked that name, obviously attempting to steer careless Palm enthusiasts into a life of drunken decrepitude.

To Whom It May Concern:

I have worked hard to convince network administrators in my law office to incorporate TimeReporter for TimeSlips into our computer management system. So far, we have paid more than $500 for various copies of this software.

Undoubtedly, this software will need to be upgraded in the near future. However, your actions in regards to the DateBk4 and DateBk5 domain names has convinced me to counsel everyone here against any such purchase from your company, now or at any time in the future.

Furthermore, you need to consult legal counsel as soon as possible. I am not giving you legal advice, nor would I ever represent individuals or corporations who have to resort to such measures to make a dollar. I have principles. Nevertheless, you would be wise to talk to an attorney who is well versed in computer law who has researched cyber-squating. Have the attorney look up a case concerning "joecartoons.com."

Regardless of the outcome of any potential legal action against you, know this: You can kiss one loyal customer, and everyone in this law firm, and every attorney and law firm that I ever speak to, goodbye.

Those Plams need to change their family name just like that evil European Budweiser knock-off company should.

I spent 20 bucks on Actionnames only to find out they wanted an extra 10 for version 5.

I hate to say it but their management sucks.

By the way, I dumped Actionnames for DateBk4, now 5, months ago....

and I RECOMMEND that you do the same.

RE: The Effects of this dialogue

sundance_7 @ 5/7/2002 2:46:16 PM #
Actually, when you think about it from a marketing standpoint, the people in here are largely developers, early adopters, and opinion leaders in the PDA markets.

To that end, Iambic would be better off taking action to mollify their PR issues here, than on their audience-limited forum. Basic PR Iambic, time to go back to school you chumps.

Incidentally, I just sent a note to PalmStation.com telling them about this thread... Censor THAT.