An anonymous source has shared with us that the Sony Clie SJ20 and SJ30 have reached the end of their production and are being replaced by new models with color screens. Apparently the new models are already listed in major US retail databases. Read more for details and pictures.

Our source claims the new SJ22G will be thinner and lighter than current SJ20G and have a color screen. It will not have mp3 audio support built in. It may be likely this will be the new low-end color clie. 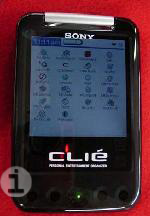 A leaked picture of the supposed SJ33, shows a new plastic flip cover. The cover appears to be transparent, allowing one to check the screen without lifting up the cover. Other details such as processor speed and OS version are not known at this time.

The T665 will also be replaced by a new model by end February. This coincides with a just announced $50 price drop on the t665, bringing that down to $300.

Credit and thanks goes to ClieSource for the images and rumor confirmations.

The super-stamina battery sounds good -- hmm, overall it looks like quite a nice unit!

I wonder if Sony is moving to a color-only lineup this year...

Geez, I've written that so many times my fingers are getting tired! :-)

Actually my bet is that Sony will beat Palm. Probably $399.

The end of February? Hmm.....isn't that when PALM usually releases new handhelds? Uh-oh...

hotpaw4 @ 1/23/2003 2:24:48 AM #
It will be interesting to see who will bring out the first "thin and light" OS 5 handheld (less than 0.51" and less than 5.1 oz.), PalmSG or Sony. If Sony sticks with the XScale, they could be at a slight disadvantage, since the current XScale system implementation requires an extra "bridge" chip which takes a little more space/volume.

Even though the Motorola MX1 ARM processor was the first one certified as "PalmOS Ready", we haven't seen the MX1 in a PalmOS product yet. The MX1 (plus a larger ROM) could be a drop in processor replacement in any of the current PalmOS units; and it looks to only cost a few bucks more than a 68k Dragonball. What would that be? An m525? Or ???

Here is some candy for the Sony lovers ;)

According to http://www.clieuk.co.uk/index.shtml in the Jan 20 entries:
Introducing the new CLie SJ33.
Palm OS 4.1
Dragonball 33MHz
16MB RAM (4MB Flash)
Monoaural Speaker
JogDial + Back Button
Built-in Audio (with supplied earphones).
These are the specs I have been given- almost 100% sure they are correct.

I think it was pretty smart to keep both OS4 and OS5 devices around... that way they support both ends of the market- those who want the speed, video, games, etc, they get OS5, for those that want organizer features, get OS4. (currently all os5 devices are highend)- palms still making the transition.

This thing is going to be tough selling it against the iPaq 1910, but this will probably be around 200 bucks.

otherwise for more than $250 it's going to be a slow sell.

mr_yellow @ 1/21/2003 2:19:55 PM #
Ever since the death of the visor edge, i've been waiting for a thin formfactor handheld with a nice thin hard cover built in. No flimsy leather flips, aftermarket velcro attachments, or loose non-springloaded covers.

I'm kinda disapointed someone in the Palm camp came out with this first... Been itching to jump ship to PPC... =)

Anyone else drooling over this just cause of the flip cover? =)

And that anyone who would jump to the PPC was an idiot.

And that you guys who all sit all day drooling over Sony's are pathetic.

And like that.....I miss that. This place seems so dull since I.M. left.

I dont see ANY justification in buying this device.

Yeah, well this is a sore spot with me. Dell really hit the PDA market like a wrecking back, knocking over price expectations. Before the low-cost PPCs arrived, a $299 Sony Clie with built-in MP3 would have been an absolute BARGAIN! Now....it doesn't look all that competitive any longer. :-(

I dont see ANY justification in buying this device."

Well, I would almost agree with you...except that the Dell handhelds run PPC. I can't wait until they make PDA's with the Palm OS...

where are the rumors about the t665 replacement?

I don't think sony would release 3 models at once, more likely the sj33 at the end of february, sj22 end of march, and new t-series by the end of april.

RE: where are the rumors about the t665 replacement?

Keep in mind that although pictures of the SJ33 have been leaked, the specs and price are still unconfirmed. The rumored specs sound right though.

...I wouldn't hold your breath from what I've seen at CES. But prove me wrong!...

I would not mind selling my T665 right now since I need the money, but only if I knew I could get the brand new OS5 replacement by next month.