Sony has released the Memory Stick PRO patch to allow OS 5 Clies to use the new expansion format, Wired on Palm Inc's wireless network, new games and software and much much more in this update.

Sony has also released updates to the Audio Player and Clie Viewer programs as well as an updated SMS Bluetooth driver.

All of the above updates can be downloaded from Sonys support site.

NZ90 Keyboard Misprint
Some early NZ90 units were shipped with an incorrect key label. The 'YEN Symbol' printed on the keyboard corresponds to a ' / ' (forward slash). Pressing this button with the function button will show a ' / ' on the screen and not the Yen Symbol.

Wired: Palm Pulls the Plugs
Wired Magazine has a very interesting piece on the Bluetooth and WiFi wireless networks in place at Palm Incs headquarters.

In its Silicon Valley offices, Palm has one of the most sophisticated wireless networks anywhere. Eighteen Cisco Aironet nodes cover 140,000 square feet across all three Palm buildings in Milpitas. Of the 700 employees on the campus, more than half have Wi-Fi cards. Palm also put in 30 Bluetooth access points throughout the offices to connect (albeit slowly) PDAs to the Internet.

In E Books
Inebooks.com carries a line of interactive "Choose Your Own Adventure" e-books for PDA's. -Sean Ford

Senet Deluxe
RoGame Software is pleased to announce the release of Senet Deluxe. Senet is an ancient Egyptian race game and the ancestor of our modern Backgammon. Senet Deluxe features an intelligent adversary, animated movement of game pieces, highlighting for acceptable moves, game statistics and extensive online help. It also has specifically been enhanced for Palm OS 5 capable devices. 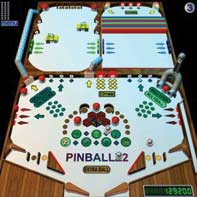 Pinballz2
Jason Goldman has released Pinballz2. The game features high res 320x320 graphics digital sound and much more. The game requires palm os 5 and is $14.95 for the full version.

PDAHandyMan
PDAHandyMan is back up after a DoS attacked knocked the site offline for a couple of days.

Sony CF Driver Update
According to ClieSource, the CF driver now supports movie and MP3 playback through the built-in Sony applications, in addition to regular VFS read/write capabilities. The company developing the driver is called EruWare. A public release is expected very soon and will cost around $27. -Alex Bosco

Oscilloscope for Palm
VITO Oscilloscope is a unique engineering tool for infrared signal analysis. The program uses proprietary infrared engine designed by VITO Technology to acquire and beam signals via Palm IrDA. The software costs $15.95, there is no demo version and it does not work with OS 5.

iReader
Tower Technologies has announced the release of the TT2301 "iReader", a iButton/1-Wire interface for handhelds with the Palm Universal Connector. The iReader is equipped with an unique 1-Wire address, an internal iButton holder, an RJ-11 connector for an external probe and is software-compatible with the popular DS9097U interface from Dallas Semiconductor.

I'm new in this forum but a long time user of Palm, started with Palm III, IIIc, Vx and now Treo 180

jjsoh @ 4/21/2003 12:36:45 PM #
There was a time when this off-topic thread would've been deleted in a heartbeat. I agree with davidkshepherd. If you want to have irrelevant and off-topic posts heard, then please post in the General/Misc section of the forums, NOT here in the news section. I'm sure most of us actually like to read/post relevant comments about the article(s) in question, not a bunch of 'first posts.'

"The company needs to fully embrace a wireless workplace so it can road-test devices and stay on top of Wi-Fi trends. Even more important, it wants to remake itself into a dynamic illustration of a flourishing unplugged workplace, to help convince penny-pinching execs at other companies that it's worth bringing the technology to their offices as well...Palm's future depends on it."

Well that's all good and well, but then why the heck isn't there a dual wireless pda with BT+wifi then? ARHH. That is what I need! Unlike PalmSG's Milpitas campus, most people don't have 24/7 access to wifi, but we CAN have access to BT mobile! In fact PalmSG even alludes to this by saying, "Phones may look like Star Trek badges pinned to clothes." Well if thats soo, then they probably will have BT! I want a PalmOS pda with integrated dual wireless and dual expansion, simple! Is that too much to ask PalmSG?

I wouldn't want to have paid $800 for a PDA and then have a sticker over one of the keys due to someone elses mistake.

KRamsauer @ 4/21/2003 2:04:42 PM #
You don't have to do it. Not like it affects anything. If you want the sticker, go for it. If you think it's so horrible and can think of one reason why it's bad, you're definitely smart enough to remember what the yen key actually types.

I personally think it's the best way to do it.

Get a life - if i had one of these units i wouldn't bat an eye lid or give a damn about having it 'fixed'. In fact, when i read this i thought 'cool, a yen symbol!' - why would you want to replace it?

peitron @ 4/21/2003 3:19:03 PM #
Sure, it doesn't affect the essence of the unit, but it sure as heck is lousy craftsmanship. I'd also expect a little more than an "Ooops, I'm sorry" from Sony. If they can't reprogram the unit, under their warranty I'm pretty sure they're in the obligation of replacing it.

rmwilk @ 4/21/2003 3:26:15 PM #
How can you reprogram printing on a key? All that is wrong is that the key has a yen symbol on it. It gives the / when pressed. Do you actually want it to type the yen symbol? I think not. If you don't like the sticker don't put it on. Everything else works as it should.

peitron @ 4/21/2003 4:06:47 PM #
I could care less for the yen or the slash symbol. It's just esthetics. But what I do believe is that Sony is under a statutory obligation of replacing the unit if it's still under it's warranty. The sticker is a lame excuse to save some bucks.

rmwilk @ 4/21/2003 4:16:31 PM #
And what statute would that be? I believe that they have offered a lawful approach to fix the Minor Cosmetic Flaw. One of the problem with this country is the thinking that the major fix has to be employed every time, and if it's not, we start using language like statutory obligation and start thinking lawsuit. The lawyers have accustomed the public to think this way.

peitron @ 4/21/2003 4:49:42 PM #
You'd have to be pretty stupid to hire a lawyer for this one. All I'm saying is that it's your choice, so long as your product is under the warranty. You can choose to put a sticker on it, to ignore it or to exchange it. (Personally, I wouldn't give a hoot.) This "right to choose" is already built into the price of the unit, so I wouldn't worry too much about Sony either.

This country was not built on whining and litigation, but it was build on freedom of choice and the protection of individual rights.

(And by the way, every State has a Consumer Protection Statute, look it up.)

peitron @ 4/21/2003 5:12:23 PM #
The Magnuson-Moss Warranty Act (MMWA), a federal law passed by Congress in 1975, standardized written express warranties to prevent consumers from being confused or misled about what consumer product warranties cover. MMWA is essentially a disclosure act, requiring sellers of goods to clearly disclose the terms of any written warranties provided to consumers.

Under MMWA, a written warranty is either a full or a limited warranty. A full warranty must guarantee that during a specified period of time any defective parts will be repaired at no charge. If the defect cannot be repaired, the manufacturer must replace the item or give the consumer a refund. On the other hand, if the warranty contains any exclusions or parts not covered, then the warranty is a limited warranty. Most consumer product warranties are limited warranties.
Whether full or limited, each warranty must provide the following information in plain language:

So, once again, if the unit is under warranty (that is, still within the coverage period and within the scope of what is provided in the text of the warranty), I think it's fair to say that a "sticker" does not repair the product and that a replacement can be requested. Once again, that is a decision that is exclusive to each individual consumer. I personally wouldn't give a hoot.

coop @ 4/21/2003 8:53:04 PM #
Well, if the idea is that the legend on the key and the character that displays when that key is pressed is the same, then maybe the sticker _does_ solve the problem within the extent of the warranty...