SilverScreen retains the simplicity and familiar layout of Palms application launcher while seamlessly incorporating new functionality and a stylish appearance. The software facilitates application management by employing intuitive drag-and-drop access to commonly-used functions that reside on a "pop-up" tools sheet. A highly-refined interface exploits the graphic capabilities of both color and grayscale Palm devices. 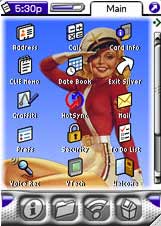 SilverScreen 3.0 adds the ability to display date-driven Ticker Tapes within the launcher environment. Initial offerings include tapes for economic events, primetime TV listings, MLB games and famous birthdays. More tapes will be added over the coming months along with updates to the current lineup. The new version also allows GIF and JPEG images to be read directly into the Pix sheet slideshow or to use on OS5 devices as backdrops. Zound FX bring customization to the audio dimension on the Palm Tungsten and new Zire models, .

SilverScreen provides full support for expansion cards. Launching and categorizing items on expansion media is seamlessly integrated along with the ability to copy and move files to and from the handheld.

"Version 3.0 continues the SilverScreen tradition of the ultimate in customization," said president Bohm S. Kim. "Users may choose their favorite look for the battery meter, application icons, pop-up sheets, fonts, scroll bar, palmtop pix and on soundstream-compatible devices even sound effects. We continue to support the widest range of Palm OS devices including monochrome, color, hi-res and extended displays. SilverScreen showcases the next generation of interface design and represents our tireless pursuit of marrying gorgeous looks to an extremely intuitive and powerful feature set."

SilverScreen, in its fourth year of release, has been a continuous occupant of the top ten lists of the major Palm Computing software Web sites. Over the last year it was a top software download and best-seller at both PalmGear and Handango. Articles featuring SilverScreen have appeared in numerous trade-magazines, Web sites, and the Wall Street Journal. In a May 2002 poll at Palm Infocenter, SilverScreen was chosen as the favorite Launcher replacement.

acaltabiano @ 7/24/2003 2:01:25 PM #
Hello everybody! While I have been an avid fan and reader of this site, today marks my registration, and FIRST post (for me). While I use my palm regularly, I am not technically that literate, and admit there is lots that I do not know, so take it easy on me please (mr. Cane!)

But, in reference: has anyone tried Facer except for me? I tried this silverscreen and was largely unimpressed. No REAL advantage over the standard launcher. I tried PPC for about a day, didn't like it. But, the Today page was such a great idea, and Facer really does the trick for me.

Try yishow from www.yibing.net. I Believe its the best launcher out there...

May your Palm be with you...

ha-me3 @ 7/24/2003 5:14:56 PM #
its not too bad, i bet you can make your palm look real nice with this program. i used to own silverscreen when it was in version 2, and i was using my old Clie 320, there was no other launching program that would give my palm such a cool look. Well i just purchased Launcher X for my new palm os 5 device and i am pleased with it, maybe i'll go back to silverscreen with os6...

I wrote the author months ago about a problem on my Palm and his software. It stopped reading the SD card in my Tungsten|T, and when I added new applications, I had to exit Silver and then go BACK in to even see them.

It was assinine. So I stopped using it. A pity - but I will not throw good money after bad, and I have written them off almost entirely.

I looked forward to this?

suilobo @ 7/25/2003 12:43:05 AM #
I always liked Silverscreen previously because it was the only launcher I found that provided a professional feel. The other launchers either imitated PocketPCs or looked too cluttered and geeky (like a Linux desktop). I was hoping that v3 would add some features and bug fixes, basically improve on what was good.

Instead V3 looks less professional, adds useless and annoying animations and sounds (with no obvious way to turn off) with little in the way of useful features. And why can't they make the standard theme just follow the PalmOS theme? If I want to jazz it up I'll download a theme but I'll like the default to stay true to the Palm design.

Maybe I'll start looking at other Launchers now or stick with the old SilverScreen.

RE: I looked forward to this?

If you don't expect anything...
you won't be disappointed

CADJedi @ 7/25/2003 2:33:15 PM #
I was really disappointed with Silverscreen... try ZLauncher instead. Its not only a great launcher, but its very customizable, and has a lot of added functionality like menu popups, recently run apps, and a really nice file manager.

Combine Zlauncher with a nice skin (see http://www.palmgear.com/index.cfm?fuseaction=software.showsoftware&sid=06B80B2F-419C-497A-83C0650DFA4019FA&prodID=49126) and I think its about the best launcher out there. I show people my Palm all the time and always get "ooohs & aaahs" when they see the "interface".

gijsraggers @ 7/25/2003 1:27:02 AM #
Silverscreen v2 still was the perfect launcher for my Palm Vx. These days LauncherX has no competition whatsoever unless you don't have Agendus (get it!) and like the today page from Facer.

acaltabiano @ 7/25/2003 2:00:01 AM #
I use the combo of Facer and Datebk5. I tried agendus, but it was more or less just a confusing fusion of the two programs I use now (except Facer provides support for Agendus' icons, though agendus seems more like competition). I like facer because it defaults to it, and forces me to make a conscious observation of my to-do's and appts.

PS: I haven't heard of "Launcher x." Where can i get some screen shots and descriptions of it?

Seriously, I use Launcher X, and love the way the tabs can be set to run down the left side (being left handed), its a good product, runs fine on my Clie SJ30

Must be you have never heard of ZLauncher. Many more features than LauncherX, about half the price.

RE: Another vote for Launcher X

ZLauncher's gadgets are plain weird and redundant. ML4's even worse and uglier. Facer doesn't support the Palm's DPad and has serious redraw problems. YiSHow almost does it, but will crash if you try to dragmove an app to the card memory.

I've gone back to LauncherX because it is the only one that is utterly reliable with VFS, and supports DPad, and has great gadgets. Needs wallpaper, but having different colors for categories is okay too.

Launcher X. Ab...WTF is going on here? Kenslow's LaunchPad progeny have all been best of breed for their time. Why isn't their survival assured?

Palm needs to buy the rights to this app and ensure its development continues. This is akin to Microsoft letting Word die of neglect.

I've got Launcher X 1.0.2. Has it been updated to any later version? Danke.

niolonra @ 7/27/2003 10:37:16 AM #
Hi
1) I tried Facer right after it came out and kept trying up until 1.8. It crashed my Tungsten several times, and the transparencies never worked right, so icons and such had ugly pink lines and spaces around them. Emails to the company were answered sometimes within a day, sometimes never. I followed the Yahoo group for a while and other Tungsten people reported similar problems, so I dumped Facer for the Tungsten.

2) I like Silverscreen and have found it to be more stable than other launcher's I've tried. I also like being able to see all the files on the device so when I delete an ap, I know I got them all, which I haven't been able to do with other launchers. True, the cutsy sounds and animation aren't worth much. The ability to set a background picture is eye candy, but hey, I like that too!
Rich

For me it has a very professional look, huge opportunity to customise and V3 is very welcome as I have wanted to have a background (as on my lap-top) for some time.

SilverScreen looks good and it works, V3 has just made it better for me.