updated Further information about Palm's upcoming fall release has been posted and a clearer picture of the lineup is beginning to emerge. Last week rumors materialized that Palm is planing three new handhelds sometime around October. The new information shows two new Tungsten models and a update to the Zire. 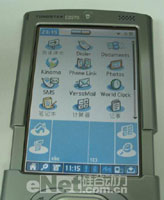 In previous rumors, the first model expected (Palm Part #: P80870US) is listed with a price of $429 and comes in a cube 6x6x6" box. New information supposedly from a large retailer's database shows a Palm T3 with a $399 list price. It is reasonable to assume this device is the Tungten T3, of which pictures were leaked last month.

The T3 appears to have a similar Tungsten T slider design with a 320x480 pixel high res+ screen, 64MB of RAM, built in Bluetooth and a new button layout.

Tungsten E
The second possible model expected was previously shown as (P80880US) with a price of $199. It will come in a 9x3.3x7" box. New information confirms the price and names the model as the Tungsten E. The Tungsten E may be a Palm OS 5 mid range replacement for the m515 and m130 handhelds, both models are over a year old and run OS 4.

The Tungsten E may take the form factor of the Tungsten W and C, which hint at the possibility the model has a built in thumb keyboard. The information posted shows the E uses the same stylus as the C and W. At a $199 price level it is unlikely to have any built in wireless functionality.

update - 8/14/03 9:43 AM
PIC has received additional possible specs from an anonymous source. The source claims the Tungsten E will have a TI 144MHz OMAP processor, 32MB of RAM, Palm OS 5.2, and a miniUSB port for synching. It will not come with a cradle, and like the original Zire, it will use the miniUSB port for syncing.

Zire 21
The third possible model is labeled (P80730US) with a price of $99. The new information also confirms the price and names it as the Zire 21. If accurate, the price and namesake indicate an possible replacement or update to the original Zire handheld. The Zire was introduced in October of 2002 at $99. The device has been one of the fastest selling handhelds in Palm's history.

Previous sources have indicated a Oct 1st release date. That would coincide with Palm's typical Spring/Fall release schedule. The Zire and Tungsten T were both introduced last October.

Waiting for that C2

For real though, these new models look great, but I'm waiting till Palm meets *all* of my demands

Hopefully thinner than W or C

I was seriously tempted to pick up a Treo 90 now that they've hit fire sale prices (I'm still using my old Palm III). But if an OS 5 device that's thin and has a thumboard is coming along in just 7 weeks, I'b be better off waiting.

I assume it would have a stereo headphone jack?

RE: Picture of Tungsten E?

Hope that helps clear things up a bit.

AkiraXXX @ 8/13/2003 4:47:15 PM #
If it came with built-in WiFi it would be a
slam dunk for me. Alas, it looks like it does not. :(
I'd get the Tungsten C since I really need the WiFi,
but I HATE the thumboard and lack of VG area.
Plus, who the hell can authenticate the WiFi to any
sort of secure server anyway? No software around for
it that I know of.

I will say that they are finally getting closer to
my dream PDA at least. I hope this fulfills someone
else's dream.

I may need to scrape up the cash for the new Sony.

vesther @ 8/13/2003 7:50:15 PM #
I would definitely buy T3 if T3 came with Wi-Fi instead of Bluetooth, but because it has Bluetooth instead Wi-Fi, I'll just wait until next year for a newer version of the Tungsten C. I now prefer Mini-Qwerty Keyboards over Graffiti, and Wi-Fi over Bluetooth. Bluetooth has too many issues as I should speak.

Hopefully, the Tungsten C2 will be a huge leap over the Tungsten C, with a sturdier case finish, a stereo head jack, and Kimona Movie and full AeroPlayer/RealPlayer/MP3 Support, though there's been a lot of legal debate over MP3s.

LiveFaith @ 8/13/2003 11:04:52 PM #
PSG has been steppin' up lately with some nice "come-backs", so WiFi is not impossible. I don't expect it, but they sure could rock the biz world with one that handles both wireless modes.

One version of the new 200+ OMAP chip is advertised to handle both radios with proper shielding? If I remember correctly. Check their website.

This is a sweet device w/ a real screen and predesigned landscape mode. This could change some things in the Palm OS world.

mikeyts @ 8/14/2003 5:45:58 PM #
I have a couple of apps for WiFi--I have a connected MPEG player (Audiotron) in my entertainment center which is best controlled from its web server. I also often want to look things up on the web while watching TV or while talking on the phone. My Palm is usually a lot closer than the PC in my office.

"The Tungsten E may take the form factor of the Tungsten W and C, which hint at the possibility the model has a built in thumb keyboard. The information posted shows the E uses the same stylus as the C and W. At a $199 price level it is unlikely to have any built in wireless functionality."

If its a non-wireless OS 5.x device, then it would most certianly fill the same market niche as the Treo 90. I realize PSG and Handspring haven't merged yet, but it would make sense if that was the segment they were targetting!? Any thoughts?

Hazniet @ 8/13/2003 4:42:54 PM #
I don't think we'll see a palm-handspring venture until the merger is complete. Besides Palm has probably been working on this unit well before the acquisition of handspring. I think T|E is a thin pda like m515 with a keyboard and os 5.

Well that's exactly what I mean. If that's what it is, then it would basically be filling the same niche the Treo 90 was occupying before. Except, this will be an updated OS 5.x model with hopefully a higher rez screen and "Tungsten" branding. Of course, PSG probably began development of this device before announcement of the merger, but the Treo 90 was discontiued by Handspring quite some time ago so they new there was an un-occupied niche out there to fill. The only apprhension I have is if the T|E is as big as the T|C and T|W. The Treo 90 was a very small device and I hope if the T|E is similar, it will also be an tiny...

gfunkmagic @ 8/13/2003 6:01:05 PM #
Yeah, I realize that Foo! What I'm saying is that if it is a non-wirless pda with a thumbboard similar in shape/form factor as the T|C/T|W, then it will essentially be very similar to what the Treo 90 was! The only difference is that the T90 was a very small compact device compared to the T|C/T|W...

IMO, it makes sense for PSG to release a lower end model with a thumbboard. So far, you can only get thumbboards on higher end models. If PSG releases a $199 model with integrated thumbboard, 320x320 screen, OS 5.x etc, it will definitely fill a large niche out there. I think alot of new pda buyers would be interested in such a device at that price! It definitely seems like a smart strategic move on the part of PSG IMO if true...

HandyMan @ 8/13/2003 6:50:07 PM #
You know, at first I thought they started the whole Tungsten/Zire thing to get rid of the model numbers (IIIxe, m515, etc...) but now it looks like all these new models have added more numbers to teh name. The names just gets longer.

When will it stop?

No, they started those names to differentiate consumer-orientated from business-orientated models. Plus, they'll need strongly-identifiable names like "Tungsten" and "Zire" if they have to change the company name with the spin-off, and you won't see "Palm" on the models on the shop shelf. The Palm logo already occupies a vanishingly small fraction of the area of the "Tungsten" name on the current models.

Edward Green @ 8/13/2003 7:18:23 PM #
I thought Palm was committed to wireless in all it's Tungsten Models. If the E has BlueTooth then it will be a winner in the European business market when the main business phone has Bluetooth and WIFI hot spots are thin on the ground.

RE: E and Wireless?

SJWeise @ 8/14/2003 3:29:14 PM #
I think it might be safer to say the Tungstens are the business end of the assortment. As they M5xx series is discontinued (many have said it was to be already) Palm would need an entry level device for business users, who may not need wireless but want the speed, color and sound of the Tungsten line. The bad part is The TW uses the same guts as the M515, so one never knows what the TE will posess...

vesther @ 8/13/2003 7:10:02 PM #
Having cherished the awesome Wi-Fi Capabilities of the C Series (and now I have a Wi-Fi Access Point at my home), I feel that I'm starting to like the Tungsten C Series much better than the Tungsten T Series, though the sound handicap is present at the current C Release. Hopefully, on future Tungsten C Releases, there will be MP3 Support, a Stereo Jack, and Sturdier, more reliable Metal Casing rather than the rather lame Plastic Casing. All the features that made me turn to the Tungsten C Handheld should also be intact--but there should be a faster ARM Processor and even Doube the Memory. I'm going t keep my Tungsten T Handheld despite typing this message on a Tungsten C Handheld, and itKs possible that soon my dreams can come true as the next Tungsten C Release will have what I've aforementioned. Otherwise, I'm going to use my Tungsten C as my primary Handheld from this point on.

A Zire 71 with VG and the same shape would be perfect, but faster CPU and BT

I like the look of the T3. with teh slider its SMALL and lets face it. how often would you need that extra space ? Not real often, maybe when reading ebooks,or browsing hte web.. but thats about it,cept for a few games.. so opening the slider wouldnt be a problem. And WHY do you all want cams!? I mean ,c'mon. If you want to take pics buy a decent digicam..

I don't want to carry a digital camera around with me all the time, so a PDA (which I do carry around with me) with a built-in camera may come in handy sometimes.