CodeJedi has released a new large update to Shadow Plan. The new version features Improvements across the board but most notable is an all new Shadow Desktop component. 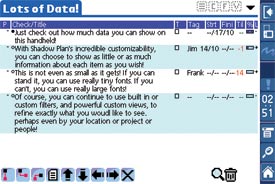 Shadow Plan is a powerful program that functions as a outliner, note taker, task manager and hierarchical checklist system in one. It helps you organize your data and also allows you to relate shadow data to other Palm applications data (like addresses, memos, ToDos and Databook appointments). You can quickly create and juggle items, with support for sorting, filtering, colour, long memos, auto numbering, multiple files and categories.

A highly flexible interface adjusts to your needs and supports international languages straight out of the box - it will improve your workflow and make your Shadow usage faster and more fun. This first release of the new desktop focuses on Windows users with full Mac OSX and Linux versions coming along very soon. Shadow Plan with the Windows Desktop version sells for $22.99 USD [BUY].

I have no interest in Shadow Plan, but maybe now they'll devote some time to a program of theirs that I DO care about, namely Xcade. I paid to register it way back with the hopes (expectations?) of future updates, like adding new games and better sound, but there have been no _real_ updates in just over a year or so. I look forward to this changing now that they will no longer be so focused on just getting their flagship product out the door.

Free form babble follows; bear in mind I've been killing myself the last few weeks getting this release ready, so I'm a little off my keester right now ;) (sleep needed!)

XCade was the first emu for OS5, and one of the first OS5 ARM applications at all, built before tools existed etc. As such, XCade1 is on the nasty side internally, doing all sorts of sickly things in order to function. As a result, it got out early and stunned everyone... but is very difficult to maintain. (Also, being an emulator on a handheld pretty much means you lose money.. such things just dont' pay the bills, ever :) (ie: Remember that I sell XCade for $9.99, and initially for $7.50; it provides a fair amount of gaming for that.. what 50c per game that it supports?! Thast a steal already!) I did use the XCade income to pay the bills for other interesting experiments, such as GuineaPig (Genesis and Turbo Grafx emulation for OS5), Kronos (text adventures), Columbo (Colecovision) and of course mighty CaSTaway (Atari ST, one of the most ambitious apps for Palm OS 5) -- all released for free. So XCade's sales have certainly helped keep those projects alive -- originally they were going to be plugin modules for XCade so you'd see the direct correlation, but I decided against it since they've got their own lives (and if you count them up, thats pretty much all the emulation going on in Palm OS.. theres a couple other folks, like the Centipede stuff by Chris and the 2600 emu by Mobile Wiz... maybe thats it :)

As to XCade itself, I do hope to update it, but being that it doesn't pay for itself, its a tough one to justify and find time for :/ I've got a patch for it coming out in a bit to work better on Treo 600's.

I've done some work towards XCade2 (planned to be free update to XCade 1.x owners).. I've got Joust with audio working to some extent, and some other gamelets. Its a total rewrite, using modern tools (since OS5 has been out 18 months or so, things have evolved a lot since XCade 1.0's days!) which takes some time, but I do hope to get into that as things settle down. (ie: Shadow 4.0 will settle in awhile .. The Mac OSX and Linux builds are going to alpha very soon, but hopefully after those wrap up in a month, I should have much more time for these other side projects.)

So it is likely there will be an XCade 2, though the question of how ambitious it is is up in there; ie: Does it just rebuild the foundation and offer a few more games? Does it try and add audio for all of them? Audio is a painful thing to do well (whole separate set of processors to emulate, so you need high performing devices to do it halfway right.)

It is an expensive thing to build (in terms of time, which costs money when your work pays the bills ;), and high risk -- ie: If I spend many months working on it, theres still the possibiliity someone may pop out a MAME port. (I myself have often thought of a Retrocade port..) -- imagine investing many thousands of dollars into development, to have MAME come out and wipe it out. (Consider the half dozen free emulators above that I myself have released .. only a matterof time until someone else gets into emulation on the handheld :)

So its a high risk proposition, though I will likely look into it anyway, as its obviously one of my old favourite projects.

An interesting aside is that I've been going after various companies to get ROM licensing for XCade, to sell bundles with etc; thats another painful issue that has not worked out well. (Companies always show a lot of interest, but tend to in the end back out.. very frustrating). I've had several rounds of funding pulled out from underneath me. (Theres a whole history here, don't get me started :)

Anyway, emulation on handhelds is murder. I do more than my fair share, and I'm trying to keep waving the XCade flag, but it must necessarily take the sideline to Shadow Plan, which pays the bills, and is a large very complex and powerful system.

(And for those wondering about legalities, etc (for which I have written many essays about) it is a simple matter; emulators are 100% legal and always have been, for they are just enablers, like an operating system. An OS for running old code on, rather than new code. However, people copying games around is not at all legal, and people should be mindful -- we do NOT encourage any form of "ROM" copying whatsoever and encourage people to buyroms from StrROMs.com and other legitimate ways (of which there are many). Myself, I have a collection of arcade machines in my basement. Try getting your wife to allow that ;)

I understand everything you just said completely, and I apologize for taking away any of your steam. :/ I'm sure Shadow Plan is a very fine product -- I can tell you've put a lot of work into it from periodically checking your website. I'm also very impressed and supportive of ANYONE who can make a living from marketing their own software.

As someone who has been interested in emulation since the earlier days of MAME, I have been excited by the possibility of having it available on the go -- thanks mostly to your projects and Kalemsoft's impressive NesEm. I expect that, as you imply, the PalmOS can be a limiting platform for which to develop emulators, but it is my hope that the imminent release of handhelds running Cobalt will alleviate some of the biggest hurdles -- allowing the handheld emulation scene to flourish!

Anyway, this is all WAY off topic. Congratulations on your major software release, and I wish you all the luck.

The impediment to OS5 for multimedia homebrew I think is the cost of entry -- gcc is well suited to homebrew, but difficult to set up to do solid ARM coding on OS5 due to the oddities of OS5; so most "PNO" (ARM) work on OS5 is done with CodeWarrior which is pretty costly, so homebrew is virtually non-existant. (Though see my Zot project for something to enable the casual scripter to work on simple games without coding per se) That said, I'm surprised theres not more homebrew.. its not *that* difficult to get gcc going for ARM on OS5 .. :/

For OS6, PalmSource has released PODS (which can also work on OS5 I should note); PODS is freeware and high quality, so hopefully it will enable more homebrew. But what worries me is.... its not caught on yet. In its defense, its still "beta", but where is the homebrew? Is PODS not well known enough? So what is the impediment? (to homebrew gaming; Palm OS is 99% homebrew, but not in ARM multimedia or gaming)

But its growing; especially on the Zodiac, where things are moving and growing, since it attracts the gamer crowd.

simond @ 7/28/2004 4:56:32 AM #
The problem with PODS at the moment is the licence says you can't build stuff to actually distribute yet, that'll only be legit once the full version gets released I'd imagine

What really made me switch from TM to SP was the developers effort to bring a desktop version of the program to all major operative systems (Windows, Linus and Mac OS X). This means I can work on the outlines at work, at home and wherever I bring my Palm.

The developer is also VERY active in the Shadow Plan discussions.
So next week will be outline Christmas for us OS x-users :-) (right, Jeff?)

jdh @ 7/27/2004 10:17:12 PM #
I've tried a whole myriad of outliner-type software over the years, and I must say that Shadow Plan, even in it's previous incarnations has to be the best outlining software ever.

About the ONLY downside to Shadow Plan (if it can be considered such) is that it is so feature-rich that it can have a steep learning curve for some... Of course, for those who simply want basic checklist apps and so forth, there are plenty of simpler alternatives out there.

However, if you want an outlining application that will pretty much create any kind of hierarchical list you could ever want, and link to the other apps on your PDA, than Shadow Plan is the app to buy.

Add to that the concept of lifetime upgrades (I registered back in the 2.x days, and the 4.0 version is still free), and excellent developer responsiveness, and you've got a great solution.