For audio, Kinoma Player 3 EX uses AAC (Advanced Audio Compression), making it possible to pack 30% more audio in your handheld than the older MP3 standard. Using AAC audio compression, a single memory card can store over 22 hours of CD quality audio. (2) AAC audio is the featured audio compressor in Apple's iTunes software. Customers can now rip their audio CDs with iTunes and play them on their Palm Powered handheld using Kinoma Player 3 EX. And Kinoma Player 3 EX can even display the album art from many iTunes files. (3) 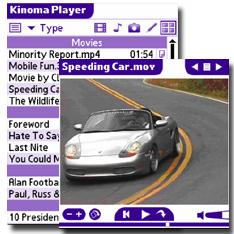 Kinoma Player 3 EX supports major digital media industry standard file formats.4 In many cases, users can take a memory card out of their digital camera, plug it into their handheld, and immediately view the video and photos using Kinoma Player 3. The MPEG-4 ".MP4" file format is featured in Kinoma Player 3 EX, as the most compact and compatible way to store your digital video. Users can also play .3GP and .3G2 files captured by the built-in camera on many mobile phones. Kinoma Player 3 EX also supports viewing JPEG photographs and some QuickTime movies, as well as the Kinoma movie file format.

Harald Popp, head of the Fraunhofer IIS Multimedia Realtime Systems Department notes, "As the leading international research lab in the field of high quality low bit rate audio coding, Fraunhofer IIS is pleased to have its audio and video technology included in Kinoma Player 3 EX. We believe industry standards including MPEG-4 video and AAC will play an ever greater role in handheld digital media, providing customers with the quality and interoperability they demand."

Even with all the advanced technology it packs, Kinoma Player 3 EX remains easy to use. Kinoma Player 3 EX offers an innovative pan, zoom, and rotate feature for video and photographs so users can quickly get exactly the view they want on their content. Pan, zoom and rotate happen immediately - even when playing video - a new user experience on handhelds that has to be experienced to be fully appreciated. Kinoma Player 3 EX remembers where you left off watching a video or listening to a song, and can automatically start from that point the next time. The user interface of Kinoma Player 3 EX also makes it easy to find and play digital media. Media can be browsed by individual media type - video, audio, and photographs - or all at once. The media browser supports sorting and a new two line detailed list view.

"Tapwave is excited to see the tremendous advances Kinoma is making in the mobile multimedia space," said Tim Twerdahl, Director of Product Management for Tapwave. "We're pleased that consumers will be able to enjoy additional media formats by using Kinoma Player 3 EX on a Zodiac."

Kinoma Player 3 EX with MPEG-4 and AAC can be purchased through the Kinoma Web site for $19.99. Kinoma Player 3 EX is compatible with all Palm Powered handhelds running Palm OS 5 (Garnet) or later and is available for download free of charge with registration. Kinoma Producer 3 requires Windows 98, Windows Me, Windows 2000, Windows XP or Mac OS X.

Release Notes: (from kinoma)
Kinoma wants to make sure you've got all the facts about our products. Digital media can sometimes be confusing, but we hope the following information will help you understand more about what our products can do.

(1) Video capacity (over 4 hours) based on 1 GB memory card using MPEG-4 video compression and AAC audio compression with a combined bit rate of 288kbps. At lower bit rates, even more video can be stored.

Geezer @ 12/6/2004 7:51:34 AM #
If only they had made it possible to play Flash as well this would be the complete package...
Still its good that it can now play from a card adn using standard formats is the best way forward - if Plam starts to bundle this with all their handhelds it'll stand a great chance

How will this compare to mmplayer?

This is definitely a step in the right direction. Kinoma recently has taken a lot of hits for not being able to read a more complicated file format, relying on the years old encoding rather then the latest and greatest. It's amazing to see the quality difference of old kinoma streams and a standard mpeg4 stream.

RE: How will this compare to mmplayer?

RE: How will this compare to mmplayer?

mswunder @ 12/6/2004 11:09:33 AM #
Purchased Kinoma Player and Producer EX 3 last week and already playing with it. It works great -- if my content is actually on the Palm. But it cannot find any content stored on my SD card -- any suggestions? Already following their suggestions of storing all content in the palm/programs/kinoma path on the SD card. Tried AAC encoded songs that I transferred from a CD through iTunes software, tried movies I had produced using their Producer software, and tried their own sample content from their website. Thx. MW

I haven't purchased it yet, though... I'm running on the 15-day trial.

hkklife @ 12/6/2004 10:52:07 PM #
Ditto. I am using the EX player trial right now and it's performing flawlessly--handles everything I've thrown at it. Definitely a nice improvement over 2.2! No issues on my 1gb PNY or 512mb Panasonic cards and it even seems to do well on an old, slow Sandisk. I'll probably pony up the $ for this one when the trial expires! I'm glad to see Kinoma hanging in there. I figured that after P1 decided to go with their in-house player and the collapse of the Clie market that Kinoma would fade away as well. Too bad they couldn't give at least a day or two of MPEG-4 support in the EX trial-oh well.

Edward Green @ 12/8/2004 8:10:36 AM #
Well I bought the package as my experience of converting to mp4 with Quictime Pro is variable and I didn't want to but the player and then discover I needed to buy the converter.

I am impressed. Videos that ran in at 9mb in Kinoma 2's compression rates are now about 3.5mb and the quality is about the same. My Treo 600 cannot handle more than 30fps in the speed test at 160x120 but I am going to see how high quality I can push the player.

What does annoy me is the increase in application size to add features I don't use. I already use Pocket Tunes and Resco View so i don't feel I need another audio / picture viewer. But I still have to wait whilst it scans the card for photos. Pah!

Also it doesn't support the ASF format MP4's that my digi cam produces. Which is a shame.

Direzire @ 10/13/2005 10:03:59 PM #
Same problem: cannot get kinoma to read videos off my gig card on my Zire 72s. Worse than that, I am unable to delete these apparently non-existent videos on my card without reformatting. Wondering if it has something to do with the camera's player? It works fine, the video type and controls are just limited. Kinoma worked great on my Tungsten E, why not on my Zire?

Manicorp @ 12/6/2004 11:00:49 PM #
I thought about buying this software but I'm not sure what the big fuss is...
I've emailed the developer and they told me that I can't convert my own DVD movies to MPEG4 files and watch it on Kinoma 3 EX. So what is the point of the producer when I can't watch movies converted from DVD's?

I can already convert my QuickTime videos or DV footage from my camcorder on older Kinoma producer so why should I sehll out another $ for a same thing. I know MPEG is more compact but if this Kinoma truely can't convert movies from DVD to MPEG4 so that I can watch it on my palm, then it is total useless upgrade.

I'm not talking about pirated copy... I'm talking about my own DVD collection I own... Please correct me if this info is incorrect, becase I am looking for a software that can convert DVD to MPEG4 that can play on my Palm.

I've looked into MMPlayer and Pocket DVD Studio for Palm... I don't know, maybe I'll stick to this combo... ?!?

dona83 @ 12/7/2004 1:21:00 AM #
MMPlayer rules if you are a power user (I bought mmplayer when I got my Treo 6 months ago with no regrets, love mmplayer)... for the average consumer I think Kinoma's the better route because it's a bit more user friendly (plain, but user friendly)

asiayeah @ 12/7/2004 9:04:48 AM #
One new feature of the new Kinoma Player is that you can pan, zoom and rotate a video while playing. The whole idea works particularly well with a stylus. I believe other video players cannot still perform this nice trick.

Kinoma Player 3 EX does the job pretty well! My Palm has a much larger LCD screen than my digital camera, plus it can now pan, zoom & rotate while viewing the video! I think the Kinoma Player is cool and I am extremely happy to see it's Palm OS only, too.

My digital camera uses a quicktime video format with movie jpeg. On my T3, the frame rate is only ~15 by the Kinoma Player. I am not so sure if this could be improved, but for now, the player already worths paying for.

RE: Plays quicktime movies from my digital camera

Yet when I play the video clip on my Treo 600, it is not showing it properly. It only shows a partial picture and it skips around. I also hear a strange noise when it plays(I do not hear the audio, but a 'hissing noise'.

Question: Do I have to somehow make some setting changes to my .mp4 video clips before playing in Kinoma? I though Kinoma automatically converts and plays any .mp4 videos!!

If you have answers, let me know! Thanks!

gijsraggers @ 12/7/2004 2:01:00 PM #
At last I can play QuickTime movies from my Nikon! And .3gp from my Nokia! And anything else. This should have been standard on any Tungsten starting 2 years ago. No need to use that buggy MMplayer version 0.28!

Yet when I play the video clip on my Treo 600, it is not showing it properly. It only shows a partial picture and it skips around. I also hear a strange noise when it plays(I do not hear the audio, but a 'hissing noise'.

Question: Do I have to somehow make some setting changes to my .mp4 video clips before playing in Kinoma? I thought Kinoma automatically converts and plays any .mp4 videos!!

If you have answers, let me know! Thanks!
Eric
edpemail@yahoo.com