While not as popular in the United States as competing smartphone platforms, the Nokia-owned Symbian S60 OS enjoys widespread popularity in other global markets, especially in Europe. So it will come as great news to many current and former Palm OS now on Symbian that the StyleTap Palm OS emulator has now entered the beta phase (albeit a closed beta) for Series 60 devices.

The Symbian-Guru site, recently posted a detailed initial impressions overview of the StyleTap Symbian S60 beta build. For users curious to see how touchscreen-enabled Palm OS apps are ported over to a non-touchscreen S60 environment, the article details the use of an on-screen cursor to highlight the appropriate onscreen areas. Apparently no use of hard application buttons or a directional pad is provided. Several admittedly coarse-looking screenshots are included within the article as well. 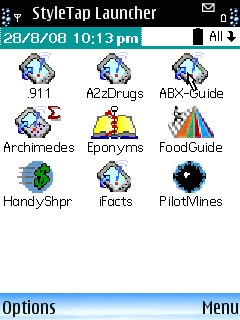 The article goes on to cover in good detail the installation of not only .prc and .pdb files is covered but even of the more oddball Palm OS apps that have a built-in or a desktop installer component. No mention is made of some of the newer apps (usually intended for over-the-air download and distribution on Palm OS smartphones) that use the Nutshell or PalmSource self-install packages.

The article does not mention the specific compatibility or changes with UIQ 3 touchscreen devices, as was stated last year, though it would presumably be a hugely logical fit for the thousands of Palm OS legacy apps available. StyleTap is already well into its life for Windows Mobile/Pocket PC devices and has been announced as forthcoming to Apple's iPhone and iPod Touch line if they can wrangle through Apple's approval process.

The Symbian version of Styletap was first announced nearly a year ago and is running a bit behind schedule, as it was scheduled to ship in Q1 '08.

Ive been seriously considering the Nokia E71 but have been afraid to move away from the Palm OS. This might make it a bit easier.

I assume the reason the screenshot looks so bad is that StyleTap is scaling a Palm hires screen to a lower resolution screen?