Almost more surprising than its actual existence is the solid feature set attached to this new Palm Centro-inspired device. If the listed specifications are correct, this smartphone sports a PXA310 CPU precisely twice as fast as Palm's Centro (634mhz vs. 312mhz), a higher-resolution 2 megapixel camera (vs. the Centro's 1.3mp), GPS, Windows Mobile 6.1 Professional powering a 320x240 touchscreen, and both Wi-Fi and Bluetooth capabilities. In fact, one of the few areas where the Centro manages to eke out a win in the spec category is battery capacity, with 1150mAh li-ion battery to the G900's 1080mAh battery pack. 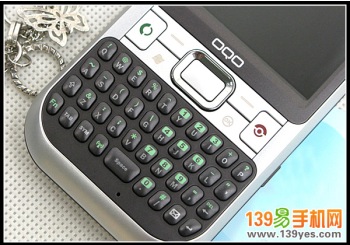 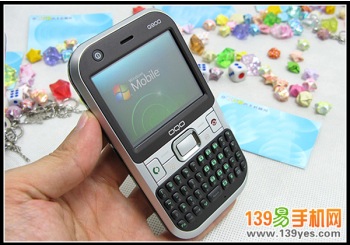 While the G9000 does look to be a physically larger device than the diminutive Centro, the indicated dimensions are essentially identical to those of the Centro. The G900's designers appear to have put the device's available space to good use with a larger, non-membrane keyboard with separate keys and what appears to be a semi-usable telescoping stylus. Additionally, the G900 employs a handful of additional buttons on the device body dedicated to power, camera & GPS functions. A 3.5mm stereo headphone jack and a dedicated reset button in the battery well are to be present, certainly to the chagrin of Palm Centro owners.

The device's manufacturer has a page here filled with photos and information about this curious handset that, despite being in Chinese, still makes for an interesting read. No word as of yet if this clone will ever see the light of day Stateside, though the unit is apparently available for order in China for Y2880.00.

that ain't no centro

RE: that ain't no centro

It ain't no centro if it don't come in pink or electric blue!

This one looks to executive for the playground.

RE: that ain't no centro

I still think it's more Centro-inspired

Silver band that wraps around the body where the hard buttons are? Centro

Identical dimensions all around to the Centro? Check

Rounded corners like the Centro? Check (Q is more square/boxy in shape & has more of a "chin")

Touchscreen like the Centro? Check. Moto Q is definitely not a touchscreen device!

Thumboard? I too thought it was Q-inspired but then Ryan commented that it's more like the Samsung Blackjack

The d-pad looks like some cross between HTC, Nokia & Motorola.

At any rate, those specs blow the Centro out of the water.
Palm should rebrand this sucker, give it a "smile" keyboard, and sell it as the Treo 580 (or whatever) as a stopgap solution between the Centro and Treo 850. Forget the 550/Wanda!

When I first saw it on Engadget (Days ago, btw) I first thought it had Palm OS. Second look had me disappointed.

I know it would be unlicensed, but I'd like to see a non-palm pos device. Maybe...

Yeah - upgrade the OS to PalmOS, install a decent battery into it and it'll probably outsell anything that Palm has reluctantly released. Nice to see SOMEONE in the world innovating on Handspring's idea - Palm sure isn't doing much...

I believe there's a typo. The processor is actually 624mhz, NOT 634mhz.