Another article has appeared to reinforce the Palm Centro's strong initial showing amongst members of the press and the mainstream media outlets. Matthew Miller of ZDnet's "The Mobile Gadgeteer" blog, has posted a new review/opinion piece entitled "The Palm Centro; at $99.99 it really isnt a hard choice.

This ZDnet review essentially reinforces Palms claim that the Palm Centro is the perfect candidate to convert featurephone owners into new smartphone users. Palm's new entry-level Centro is winning praise left and right with many similar articles written by non-smartphone users or former Treo owners that are returning to the platform due to the Centro's affordability and size. 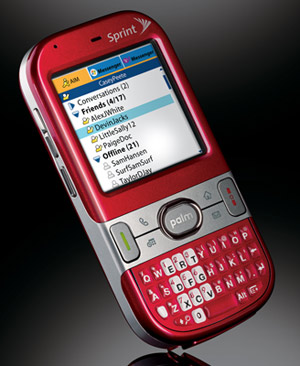 In what may be mere speculation, the final paragraph contains a tidbit about a forthcoming GSM Centro: "As soon as a GSM version is available, I will most likely buy one for my Palm OS device" Previous rumors suggested that a GSM-based, Palm OS Centro (perhaps with a Treo moniker) will be available in early 2008, quite possibly on the AT&T and Orange networks, once Sprints period of exclusivity with the current Centro expires.

The ZDnet article goes on to conclude on a series of extraordinarily, nearly unbelievably positive notes. Mr. Miller proclaims that the Centro is "..the best Palm OS device that has been released in a few years and has all the specs you will find on the larger Treos" (Emphasis added is mine, not the authors). Any long-time Treo user will immediately notice that the Centro makes several compromises in the areas of screen size, keyboard size/layout, battery capacity and memory card format. Palm's Windows Mobile-powered Treos, also pack considerably more multimedia prowess over the Centro, such as A2DP, improved Bluetooth and camera quality (especially in the Treo 500v), and Wi-Fi capability via SDIO cards. For certain power users, these factors could be potential deal-breakers when considering a Centro purchase and to leave them unmentioned is unacceptable, especially in a review by a supposed long-term user of the Palm OS. The ZDnet review unfortunately glosses over nearly all of the Centro's shortcomings aside from its keyboard size. It would be helpful if Mr. Miller had at least made a clear distinction between Palm OS Garnet-based smartphones and Palms Windows Mobile-based offerings.

Mr. Miller touts the devices attractive-sounding $99.99 price several times but unfortunately does not go into detail about the myriad of steps required to achieve this effective final price. He also fails to mention the fact that Sprints mail-in-rebate is slated to expire on November 2nd as well as the fact that a minimum level of monthly data services must be maintained in order to qualify for the rebate (which may runs the risk of never being fulfilled). Nowhere within the article is the Centros full retail price of $399.99 mentioned.

Finally, for Mr. Miller to call the Palm Z22 "lame" at the equivalent price point of $99.99 is a gross exaggeration and quite an unfair comparison. Even entry-level smartphones target a drastically different market than do entry-level, retail-oriented PDAs. Palm's own website and marketing materials all indicates different target audiences and user bases. Even if the Centro were available for a $99.99 "out the door" retail price with no rebates, the required monthly services even under the fabled SERO plan would quickly push the devices cost over a two-year period well in the neighborhood of $1000. A simple basic PDA like the Z22 is an unconnected device, and maintains full functionality past the point of initial acquisition without any additional monthly service charges.

People here have been asking Palm to shrink the brick for a few years. If they would just read these forums.

I guess it's an OK device to buy if you don't want to waste the price of a Treo and yet want some of the advantages of one. Since we may not see Palm releasing a Linux Treo for yet another couple years, the Centro is a cheaper way to wait them out.

If it was only $99, then yes, I would agree. But it is not just $99. It is $99, plus a two year contract, plus an upgrade of accessories (memory, case, extended battery, screen protector, etc). The accessories are not as big of a deal, almost any new gadget will require a suite of accessories to accompany it. It is locking in to the Centro for two years that is the problem. Once you take advantage of the two year contract (existing customers), then you are not eligible for any 'similar' promotions for the next two years. So you are basically locking yourself into the Centro for the next two years. Unless you plan to pay full price for your next smart phone (palm or otherwise). Too much is evolving very rapidly in this market to make a decision today that will require one to put their blinders on for another two years. The specs on this device are already two years old (if not older). So the real question is, "Is using a Centro for the next two years, which is based on technology that is already over two years old, worth an investment of $250+ today"?

A GSM Centro might even interest me, if only "slightly". I don't know how the actual cost would differ if I didn't accept the $25+ per month contract, but it really doesn't look like the initial cost to get the Centro would be all that different than my recent purchase of a Nokia "feature phone". It would be nice to have a phone that doesn't require me to scroll through an annoying number of menus just to get anything done; at least the Palm OS is familiar. So if I lower my expectations and act like the Centro is nothing more than a replacement for my feature phone, it looks like a pretty good deal.

I am noticing that classic PIC commenter pattern. If it's bad news, we're all over that. If it's "neutral", we'll find the bad in it. If it's good news and we can't find a way to spin it, we'll ignore it.

I think $300-$350 for an unlocked GSM Centro appears to be a likely launchprice.

I'm expecting it to have just a VGA camera and, of course, EDGE instead of EVDO. That, combined with the traditional market pricing pressures for GSM handsets (coupled with the fact that being GSM it's intended more for "elsewhere" than the continental USA), should see the GSM Centro come in a bit under the CDMA version.

Then again, the Centro in any flavor is still going to lack standard voice dialing, wobbly Bluetooth support and have an awkward (at best) phone keypad. Not to mention that Treos have never been known for sterling voice quality or reception.

A dedicated, feature-rich, tiny GSM phone + the ol' TX still might be your best bet at this stage of the game.

But...but...but..how would you get your fingers on the keyboard!?

Did I say I would use the keyboard on the Centro? Try reading my post again. (Oh, sorry, I forgot who I was talking to; reading comprehension has never been your forte.)

> Did I say I would use the keyboard on the Centro?...

A dedicated, feature-rich, tiny GSM phone + the ol' TX still might be your best bet at this stage of the game.

Yes, you are probably right. There's really no getting around it. Palm simply doesn't make the device I want. Who knows if they ever will.

(Oh, and SV, just so you understand clearly, "Yes, you are probably right" is not referring to you.)

My TX is two years old and the battery is starting to get noticeably weaker. However I'm not fond of buying the same device: it's not just the hw that got old (compare the TX screen with the ip), the software too is wearing out. Blazer is unable to decently load most web sites, lack of support of basic web 2.0 is getting more and more in the way, etc.
All of this makes me seriously consider the Nokia N800 or the touch as a replacement device for internet and multimedia. Leaving the TX for PIM.... which I find somewhat ironic.

This isn't really good news to me either. Now that I need to replace my broken TX I don't even have much to choose from. The Centro doesn't have 320X480 and it doesn't have WiFi. What's to like about it for me? I can't even use the phone part with my cell provider. So no, it's not a tough choice deciding on the Centro. Absolutely not. If there is no TX2 in the next couple months my time with Palm will come to and end. Like someone already mentioned I could buy another TX but since it's already two years old it will become more and more useless for the web as time goes by.