Cingular palmOne Treo 650 Out With EDGE

Cingular Wireless and palmOne today announced the availability of the Treo 650 smartphone, the first device of its kind to take advantage of the carrier's EDGE (Enhanced Data for Global Evolution) network, the fastest national wireless data network in the United States. The Treo 650 also is a quad-band worldphone, so Cingular customers can make and receive voice calls in 170 countries and access data in nearly 75 countries.

The palmOne Treo 650 combines a compact, full-featured mobile phone with email, a Palm OS organizer, messaging, web access and digital camera, letting users organize and simplify their business and personal lives all in one device. The newest member of the Treo family builds on the award-winning design of the Treo 600 with new and improved features, including a high-resolution screen; expanded multimedia capabilities, such as an MP3 player and video capture and playback; removable battery; non-volatile memory; and Bluetooth wireless technology. 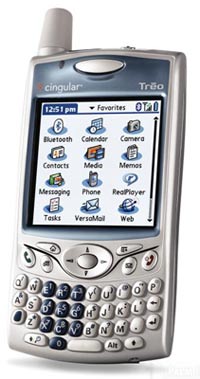 "In a world where everyone is mobile and everything is digital, people value mobile access to the information they care about most," said Ken Wirt, senior vice president, worldwide marketing, palmOne. "With Cingular's strong voice and data network, the Treo 650 smartphone meets this need by delivering a great voice and data experience in a single, easy-to-use device."

EDGE Benefits for Treo 650 Users
Equipped with EDGE technology, the Treo 650 can access accelerated data speeds averaging up to 135 kilobits per second (kbps), which is nearly three times the speed of a conventional wired dial-up connection. Cingular's EDGE network is available in more than 8,500 cities and towns and along 30,000 miles of highways.

EDGE's fast data speeds and widespread coverage, combined with a high-resolution screen, improved QWERTY keyboard for easy text entry, and user-replaceable battery, make the Treo 650 an ideal platform for enterprise email and vertical market applications. When deployed with enterprise email solutions, such as Cingular's XpressMail or GoodLink by Good Technology, the Treo 650 enables users to send and receive email, meeting invitations, and updates to contact directories and to-do lists.

The Treo 650 enables enterprises to deploy real-time applications tailored for a wide range of industries, including healthcare, high-tech, professional services and more. With EDGE's data capabilities, the Treo 650 on Cingular's network offers faster data rates for best-in-breed solutions, such as field-service/sales-force automation and patient/case management, putting critical data more quickly into the hands of enterprise professionals. Cingular Wireless is the leader in enterprise wireless data solutions, serving employees of 95 of the Fortune 100 companies and more than 80 percent of the Fortune 500 as customers. It also serves more than 1,200 federal, state and local government agencies.

U.S. Pricing and Availability
Cingular Wireless customers now can enjoy the Treo 650 on the company's ALLOVER network, the largest digital voice and data network in America. The Treo 650 will be available later this week for consumers and businesses online at the palmOne Treo Store and at select Cingular retail locations.

The Treo 650 is available at a suggested retail price of $549.99 without a contract, and $449.99 with a two-year contract. A variety of monthly data plans are available, including an unlimited plan for $44.99/month.

Hopefully the GSM version will have all the bugs worked out now.

Out of the box it does have the few rom updates. However Bluetooth DUN is missing, there is a patch on shadowmite's website to enable it.

>A variety of monthly data plans are available,
>including an unlimited plan for $44.99/month.

I was initially very disappointed to see the above statement which implied that an unlimited data plan on Cingular for the Treo 650 would cost $44.99/month, (compared to $15/month on Sprint).

However, looking at the Cingular 650 on the PalmOne web site, I see unlimited data appears to be available for $19.99/month. I'm not sure why the press release says $45/month if cheaper plans are available, but I'm sure others may also get the wrong idea from this.

Sprint used to (and may still?) have a shared plan where they charged $15 for unlimited data on the first phone and $5 for additional phones on the same plan. I'd love to see something similar from Cingular...

In the mean time, I'm at least happy to see that the phone pricing itself is finally getting more aggressive. TreoCentral claims that Cingular will intro the 650 with a $50 rebate for a price of $399 w/activation, and they've also been advertising the 650 on Sprint for $319!

Perhaps the unlimited data plan of $20/month requires being added to a voice plan, the cheapest of which looks like $25/month, for a total of $45 per month (minus a penny or two).

Unless there is a difference in data plans? Are all data plans EDGE?

All data plans arent EDGE. But they all are GPRS. That is how I understand it. That and my T616 cannot use EDGE because it does not support it. But it does support GPRS so I can deal with a max speed fo 113kbps (usually around 60-70) for doing mobile tasks.

>Perhaps the unlimited data plan of $20/month requires being
>added to a voice plan, the cheapest of which looks like
>$25/month, for a total of $45 per month (minus a penny or two).

Also, while it's possible that $19.99 is a GPRS-only (not EDGE) price, I got that price from the PalmOne web site while looking up service plans for the Treo 650. So I would expect that (since it didn't say otherwise, and it didn't offer any alternatives) they meant $19.99 was the price for unlimited EDGE data on the 650.

I guess in time we'll find out as people start signing up. Cingular's own web site still doesn't even show the 650 in their phone offerings.

Did anyone notice the unlocked GSM Treo 650 that Palmone is selling? Good news for T-Mobile users.

Does anyone know if the unlocked version supports EDGE?

Are you certain the Cingular model is locked?

all indications (from reporte/rumors?and those who got it already) so far is that the cingular phones are locked. right now, you cant even use it with att. att will sell you its locked version.

also, the phone supoorts edge. they dont strip it out to sell an unbranded/unlocked one.

...But before you EVEN use the phone on T-Mobile, you should definitely call T-Mobile to see if the Treo 650 will work well with T-Mobile's networks. Some GSM Networks may or may not fully support the Treo 650.

'the phone supoorts edge. they dont strip it out to sell an unbranded/unlocked one'

So... EDGE was added by Cingular? I will be listening for limitations by being locked, it is a bit confusing. And Cingular says they are the same company as AT&T now, virtual interoperability. Which must be BS if one must get different phones.

edge, is slowly rolling out.

right now, the merger isn't complete. they still have seperate system for everything.

some ppl have ported there number over to the other system (cing to att or att to cing) to get a cheaper price on the 650. :)

NOTE: Please call your mobile phone service provider to make sure their service is compatible with phones that run on the GSM/GPRS network before purchasing an unlocked GSM Treo 650 smartphone.

* Additional data services from your mobile service provider may be required in order to use your Treo smartphone's email and web functions. Please check with your service provider regarding pricing and availability."

Now, what bothers me are 2 things:

That being said, the Datasheet does mention supporting GSM EDGE without mentioning Cingular in the same sentence. :-)

While Cingular and AT&T are 'the same company' if you want to change from an AT&T plan to a Cingular plan, there is a small 'contract termination' fee and you have to get a new phone in most cases.

The description in Dutch (GSM 650 unlocked) does mention Edge support, though a note says it needs an EDGE supporing service plan, as it mentions it for GPRS. http://euro.palmone.com/nl/nl/products/treo650/index.html

Question: where would you setup the Treo 650 for Edge? Under Pefs/Networks? Mine does not mention Edge, just GPRS, ISDN (?!) and wirelss dial-up.

...the only ones left are Nextel, Verizon, and T-Mobile. I hope palmOne will work with Motorola to obtain an iDEN License soon so that a Treo will be operable on Nextel's and Southern Linc's iDEN Networks.

Is an iDEN-based Treo likely, given the Sprint-NexTel merger (not to mention the lack of PTT on the 650)? And whatever order you put these in, make sure that Verizon is last - they have the most stringent tests for putting a phone on their network.

Carriers can be a real pain sometimes...

I'd wager T-Mobile to be next on that list by far. Verizon is definitely at the bottom of the list--they just started carrying the ancient Treo 600 in the 2nd half of '04 fer cryin' out loud!

So for all of us miserable CDMA/VZW users with no other alternative, I'd expect Verizon to launch a 650 this fall (at the soonest) after the hubbub of their E815 Moto & EVDO launch.

i think verizon will come, just at there pace.

t-mo is rumored to be march/april or even may.

>>"...the only ones left are Nextel, Verizon, and T-Mobile. I hope palmOne will work with Motorola to obtain an iDEN License soon so that a Treo will be operable on Nextel's and Southern Linc's iDEN Networks."<<

If you mean the only providers left in the market, that would be incorrect. You left Sprint out and they are a viable competitor. They are the first CDMA carrier with both a cameraless and standard 650. Also, they are buying out Nextel. That will leave Verizon, Sprint, and Cingular as the only major (national) carriers in the U.S.

If you mean that these are the only ones left who don't yet carry the 650, you would be correct. I don't anticipate Nextel ever carrying it, however, as their networks are very specialized, and there doesn't appear to be a 650 (now or on the horizon) with iDen push to talk.

What's the deal with PalmOne's online store? I tried ordering one, but nothing seems to work. I input my zip code and selected "No, I want to keep my existing mobile phone plan", then selected Cingular from the drop-down list. But when I click submit, it just shows me a blank page with "Mobile Phone service provider: Cingular Wireless" appearing at the top.

Anyone else having problems ordering? :-(

Point is you may want to how off ordering the higher priced one at PalmOne's site.

It appears that they don't either site ready for primetime.

Wouldn't it be great to have a company announce something and have it actually available for purchase at that time.

PalmOne's site last night seemed to work all the way to the end. Happy to take your order. Full price and never allowed any discounts. I called and they said they expect to ship in one to two weeks.
Called Cingular and they didn't have it in their computer at all. But were happy to sell me a 600 for 50 bucks off the 399 price. I called again... and again till I got someone less stiff and would look a little further. It appears that 'shipping' is based on where your zip code is at. Give Cingular a zip code in Washington or Oregon and it appears that the 650 doesn't come up as an option. Put in California and you can get a phone.

is there anyway to order treo 650 unlocked internationally from the states? i have ARAMEX address in the states, but i heared that palmOne don't accept international credit cards. can someone guide me please. thanks

You can buy it at singapore's site:

They deliver worldwide in 2 days, TOP!