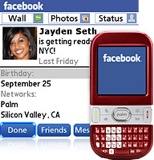 Palm has released a new Palm OS native facebook client. The free application provides access to the Facebook social networking service on your Palm smartphone. The program allows you to respond to messages, upload photos and video from your device, and receive status updates. You can also update your status on the go, browse your friends' profiles and send out new friend requests.

Facebook for Palm is compatible with the Palm Centro, Treo 680 and 755p devices. If your device is not compatible you can always visit the Facebook mobile site at (m.facebook.com). Users can download the app on their device by visiting mobile.palm.com/facebook in your mobile browser.

Tried download the '680' version but after running, it says it's not compatible and deletes itself.

Unfortunately, the Treo 650 could NOT be supported as some supporting libraries were not compatible.

The only "libraries" missing in regards to 650 support is a big book that should be in Palm's marketing dept that says to "delight the customer" by offering updates to legacy devices.

ANY technical reason that Palm may offer is bollocks, pure & simple. I'm no programmer, but all of these devices are essentially identical and they're all running Garnet 5.4.x. No app could require anything that couldn't be added/modified by an updater, especially since the 700p's hardware capabilities match or trump the 680's in most aspects.

Palm's still a two-trick show in every sense of the word. They have an old Garnet nag and a WM pony. With Palm, it always comes down to whatever's the newest & the hottest. That's why the Centro offers beter performance and a much better software bundle for a far lower price than the 755p that predated it by just a few months but had a significantly higher pricetag.

Palm's trying to put the 700p out to pasture as quickly as posslbe, after its 12+ month long ROM update debable/PR nightmare. The last stocks of the 700p are in the process of being sold off but the 755p is a still-current model. So it makes sense (not that *I'D* do it or recommend doing this) from looking at Palm's support history that they'd do something like this to try and further the gap between the 700p & 755p.

P.S. The 650, despite being Palm's ONLY POS smartphone for a very long time, is old news and no longer being sold through any carriers or channels. So it's no wonder that Palm's trying to put it to pasture ASAP. And I can assure you that if Palm EVER decides to release the Google Mobile Maps location fix, it'll ONLY be for the Centro.

The computer on the Apollo that took us to the moon had 4K of RAM. Now the Treo 650 and the other "not the latest Palm devices" are unable to support a Facebook app? Rubbish. It's merely a poorly disguised attempt to sell a new device today. If you've already bought one yesterday, Palm couldn't care less about you-unless you want to buy a new one. That's the reputation they've earned. The reason I bought and installed a Generac standby generator rather than a Chinese one for 40% less was that if I needed service I can get it. That's also the reason why I don't have a Palm phone.

I'm a Palm-fan through and through, but come on... I still have my Tungsten T, but in no way expect Palm or any third-party to worry too much about app support. Even though you're not a programmer, if you've ever worked in a company that makes software, they spend huge amounts of $$$ testing/supporting compatible devices. Many companies (I can't personally speak for mobile software) can nearly put a dollar figure to adding/removing devices to their compatibility list (factoring in testing and end-user support).

I'd be willing to bet Palm does the same thing, and someone said, "Sure we can support it on the 650, for $xxx,xxx", and they turned it down.

As a small business partner, I don't blame them... They're really trying to trim the fat and stay afloat to get through this calendar year to simply survive as competitor in the smartphone market. I don't blame them for putting circa '04 technology to pasture.

Don't get me wrong, I'm all for getting your money's worth out of technology (I get irritated at my wife's years yearn for a new flip phone :-|), but in Palm's current situation I can't blame them.

Don't fret for too long though... If you still have a Treo 650, check 1src and I'm sure some Treo 650 nut-case-programmer will create a hacked version of the apps that runs with some boot-legged 680/700 libs ;-)

Long live the PalmOS weirdos! (Myself included if I still had that kind of time on my hands)

More Palm bashing. Why am I not surprised.

Confirmed. I told mobile.palm.com/facebook that I have a 755p on VZW, and downloaded the app - installed and pulled down my information with no problem. That said, I noticed two things:

1) the interface looks very similar to FB's iPhone interface, and
2) the application doesn't seem to do much more than the normal mobile site.

Seems to run fine, but slowly

Installs and runs fine on my 680, but it keeps timing out when trying to pull down my info. Probably just the initial rush of people using it for the first time. I wonder if Palm have a special proxy set up for this app or if it pulls your info directly out of Facebook? If it's the former it might explain it.

Nice to see them put stuff like this out. With Blazer getting further and further out of date, native Palm OS web apps are the best interim solution Palm could offer. Here's hoping this is only the first of many. (Me, I'd love a Google Reader app.)

This app is a great addition to Palm OS software recently. It runs fine on my Treo 680 with Edge. It has a very modern UI from Palm. It has a tab view like the built-in Phone application and its icons/buttons all look great. The client also caches information on the local Palm device to make it faster. I don't see any close integration of Facebook contacts with its built-in Address Book or Contacts yet, but perhaps that's due to licensing restriction with Facebook.

The only sluggish part of this application is in terms of the speed of its photo display. Even though the photos are cached, it look a while for its thumnails to appear. It looks like the thumbnails are generated on the fly but not cached. But this is only a small glitch.

This application defnitely worth a full review on its own and I am looking forward to read a detail one soon from here or other websies. It definitely makes the Palm Centro more competitive to the Blackberry (which has an official facebook client) or even the iPhone. This application does come a bit late, but it's really a great effort and bringing great value. Palm, please continue to bring us some of this kind of high quality titles to keep the Palm OS platform alive!

Works great on my Centro. Very nice touch. Should bring lots of the collage age to the Palm brand.

I was able to load it on my 700p and it runs fine for a day or so. After that it freezes and forces me to do a hard reset and reload my data. I've tried three times and received the same results each time. I'm sure there is another app that is causing the conflict, but I can't find it. Even though I would love to use the app, I'll have to stick to the web version.