A Palm OS developer in France has ported 3 classic PC first person shooter games over to the Palm OS. Original copies of Quake, Doom and Hexen can now be run on most Palm OS 5 handhelds.

The Developer known as Yoyofr has released three classic 3D games for Palm OS in one day. Building on the Zodiac ZQuake work of Jeff Mitchel (aka 'Skeezix') and the developer known as 'Squidge'), Yoyofr announced that he would port this to non-Zodiac Palm OS devices. He released a Quake port, along with the bonus releases of classic 3D shooters Hexen and Doom. 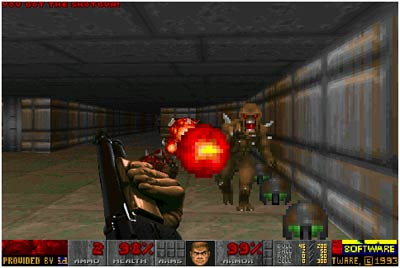 There are screenshots and downloads all of these from his site. The games require valid mod / pak files from the original games or at least the shareware / demo versions). See the website for full installation instructions.

Update: Updated versions of these game ports can now be found at MetaViewSoft.

Good god!! The holy grail of portable gaming may indeed finally be in sight! Now we just have to figure out how to control gameplay with the crummy buttons, d-pads, and styli on today's devices.

Someone please take a crack at these and report back on how they fare on Zod/T3/T5! I'm going to go home tonight, dig my old Doom, Hexen, & Quake CDs out of mothballs and give it a whirl. A shame Heretic isn't included in this, huh?

These require at least 8 mb heap - so the puny heap of older OS 5 devices like the T|T is not enough. BUT - you can donwload an app called 'udmh' which will increase your heap to as much space that you have available. I set my TT to 9mb heap (i had to free up main storage ram by putting some stuff on SD). Worked amazing: on the T|T1 with no over clocking, Doom runs super smooth!

>>Someone please take a crack at these and report back on how they fare on Zod/T3/T5!

My experience with the T3 is not so good - ZQuake and ZDoom both get quite far into start up (Doom loads most data and starts music playing) and then Fatal Error. Hope they fix that soon because the T3 (and the T5) has the horsepower to potentially run Quake at good framerate (can't imagine that quake will work too well on a T1!).

Well Doom 2 is already available on the Zod as an SD card ( I should know, I'm getting it on the weekend). ZQuake will be an interesting experiment, especially with the 8Mb of V-RAM.

If only they would port over Descent (or even better, Descent 2) to the Zod. I'll be getting a Zod then!

>>Well Doom 2 is already available on the Zod as an SD card ( I should know, I'm getting it on the weekend). ZQuake will be an interesting experiment, especially with the 8Mb of V-RAM.

Don't bother: this runs faster/smoother and at higher res (the official zod port has control issues and is lower res - but scaled up to fill the screen. doesn't look as good as this free, direct port)

Does this port not fill the entire available screen space of the Zod's screen? Can it be scaled up/down?

Due to time constraints I have not yet had time to give this a go on my T3. I'm hoping to take a crack at this on a Zod this weekend if I can borrow one for a few hours.

Most devices don't have the runtime memory to run these, but udmh will help most of the time. They're also finicky yet. The need for udmh will likely go away as well, its just not been built in yet.

I get the same problem that rsc1000 has on my T3. Anyone figure it out yet?

None of these work on the T3 yet. On my t3 everything is correct but will not work. My t1 will run Doom great with the udmh app.

Well, we can't let those with a T3 go without Doomage. Come on Palm community, lets get a fix!

No go on my T3 either. Haven't had the chance to test it on a relative or coworker's "lesser" Palm yet. Anyone know what model(s) yoyo used for testing? Or, basically, does everything OTHER than a T3 work properly?

I've been posting at yoyo's forum and giving him what information I can about the problems with the T3 and the program. A couple other T3 users have arrived at the same place as I have. Let me just copy over a couple of my posts there so ppl here can see where we are.
_________

Well, I've been struggling to get ZDoomz to work on my T3 all day. I've arrived at the point where the music works and I hear the game playing in the background. I can even run around, shoot the gun, and use the menu to exit. The problem is that the display gets stuck displaying a white background with the status bar noting "starting music... please wait", which I figure would be the last thing displayed before you'd be dropped in the game. It seems to me that somehow the display isn't getting updated. Sometimes, when I exit ZDoomz through the ingame menu, I see the last frame of the game show up on screen as it should.

How I got to this point:
- I found that the screen must be in landscape (rotated), regardless of whether you're using 320x320 or 480x320.
- I've also found that UDMS doesn't help in this situation.
- Furthermore, Hexen has the same problem, except that the background is black, not white.
- Also, there are just random fatal errors when trying to start the game that I just have to keep trying to get the thing to work. I have a hunch that after the Palm soft-resets, one needs to pop the SD card in and out once before starting up the program again.
__________

darhorn2 and wantan seem to be at the same place that I reached yoyo. Portrait crashes, landscape has that white (or black in the case of Hexen) screen, and Quake always gets that pop-up out of memory error even if you allocate 15mb with UDMS.

Its udmh and it should not be required on the t3 as the whole point of udmh is to increase heap size on older / low end os 5 devices - but the t3 already has a hefty 12mb of heap (no know palm os app needs that - these need 8mb).

NoGo on my T3 also

Sorry about the spelling, but since the program wasn't helpful, I didn't bother to recheck the spelling. I tested UDMH because someone suggested that the estimate of 8mb was low-balled and even the creator of the program recommended giving the program a try.

The author's website appears to forward you to a spyware/adware site. Be warned.

The site is 'framed'. The content frame is at the very bottom -- or go here: http://yoyofr92.free.fr/zquake/index.html

The last time someone made this claim it was a massive scam to get Email addresses.

Can someone mirror the files or something? I don't understand the language.

There is no scam - you can go to Zodiacgamer forums where yoyofr announced this first to see the billion related posts :

.. or you can link to the yoyofr site pages WITHOUT the ads by getting the link from the center frame. This gives you:

...the ads pay for his site hosting.

Never was a scam, AFAIK.. I did the original Quake port many months ago, and only recently Squidge determiend what bug was holding it back (a bug in the compiler libs .. most annoying); yoyo has added a lot of polish and finesse to it all.. and resulted in this work.

You can get the original source for ZQuake on my codejedi.com site; the build on yoyo's site is a PNO version (for all Palm OS, and not just Zodiac).

It requires piles of heap of course, but that perhaps will adjust over time as this is all very new.

yeah, yoyo did a stunning wrap up on all of these :)