Crystal Canadian Treo 650 up for Auction

palmOne Canada today announced an online auction for the Ultimate Canada Smartphone, a one-of-a-kind Treo 650 smartphone bejeweled with over 2,000 Swarovski crystals illustrating a wrap-around Canadian flag. Proceeds from the auction will benefit the Canadian Autism Society.

Interested parties can bid for the Ultimate Canada Smartphone at canadasmartphone.com from today until 12 p.m. EST on Thursday, April 14. All proceeds from the auction will be donated to Autism Society Canada.

The Treo 650 smartphone was just launched in Canada on the Rogers network. In addition to its inspiring design, the Ultimate Canada Smartphone sings, reads, and plays red and white through a collection of pre-loaded Canadian applications and downloads, including: 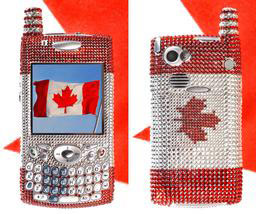 "This all-in-one device packs and shines Canadiana cool," said Michael Moskowitz, president and CEO, palmOne Canada. "In addition to its winning design, incredible Canadian applications and the standard all-world capabilities of the Treo 650 smartphone, the Ultimate Canada Smartphone will also be a terrific vehicle for raising funds and awareness for Autism Society Canada."

Artist Debi Kisluk of Eclectics ArtWare (www.electicsartware.com) implemented the design of the Ultimate Canada Smartphone through her customization service Glitz2Go.

I would love to see the faces of people at
1. a gun show
2. GOP convention
3. In Texas
4. In Mississippi

This is going to be put into South Park.

Then we could make a Treo with the Stars & Bars on it. The phone would play Dixie as a ring tone.

I'd love to see this one at:

#5 anywhere outside the USA.

Stars & Bars! That's hillarious Rhino. That baby would sell down here in GA.

I'm sure of that. Hell, you can get faceplates with the Stars & Bars on it for Nokia cell phones now.

Stars & Bars being labeled as racist is a perfect example of "Artificial Prejudice" where minority racial leaders only keep political power by feigning victim for sympathy and influence.

However, a Stars & Bars phone is not for me. Great great granddaddy fought for the North. ;)

"#5 anywhere outside the USA."

Nah, a Canadian would just smile politely and say "Nice phone you got there, eh?".

What you expect from someone that can't legally own a handgun?

Now where did you hear that from Rhino? Shotguns & handguns are no problem to legally own up here. We just aren't as liberal with the assault class weapons as our friends south of the border. You can read up more on it here: http://www.guncontrol.ca/

Back on topic, this thing is one fugly palm. I can't see anybody in their right mind using it as a daily driver.

Very nice - all those gems must way it down though. What national Treo will be next?

I would like to see one designed by Tiffany and Co. with real diamonds all over it. They could price it at $250,000. Now THAT would get some marketing attention.

.....or better yet, Neiman Marcus could commission a diamond-studed pair of Treo 650s as their "His and Her" Palms for their 2005 Christmas Catalog

Or the James Bond Treo 650 with the ability to release a parlyzing shock to unsuspecting thugs :p

Ha, Paris Hilton should pay P1 to make a Treo 650 with nothing but diamonds. That can replace her hacked Sidekick.

IIRC Palm did something like this for Claudia Schiffer when she signed on to market her own Palm.

It's been a while so the memories are a bit fuzzy :)

I guess this where the remaining R&D budget has gone. Instead of trying to play catch-up with Vertu, P1 should put whatever $ they have left into shoring up their build quality and software stability.

I thought we had seen the last of this gimmicky sh!!!!t with the red and blue m505s. Guess I was wrong. Remember, folks, style over substance only goes *SO* far.

I mean, a black Anthracite-colored Tungsten with a metal body would be oh-so cool and cost next to nothing to produce (in the big picture). Heck, I'd wager the $ put into this one-off Treo would been a nice upfront licensing fee towards getting Graffiti 1 back onto the platform. That's called a USEFUL expenditure!

RE: Unique but worthless

-------
hkklife:
I guess this where the remaining R&D budget has gone.

It's not like Palm made this, It is a One-off made by a lady that does this kind of decorating things.

PalmOne is just taking advantage of an opportunity for good press and PR.

hkklife,
WHAT are you smoking?????.....and where can I get some?
It MUST be good if you think that Pa1m would actually produce this in the factory, quantity 1, rather than job it out to somebody else. Or that Pa1m would even be involved in this outside of the most tangential manner marketing-wise.

You guys crack me up!

These things would be good for target practice - along with a bunch of Celine Dione CDs and anything else Canadian.

Canada lives off of the goodwill of the American people.

I love it when you build bridges for us.

These things would be good for target practice - along with a bunch of Celine Dione CDs and anything else Canadian.

Hey - I've seen 24. Jack Bauer gets shot at all the time defending the rights of America. Isn't Jack Canadian, eh?

I have to agree with Gekko there. If Cananda only canceled their national healthcare program, then their economy would be actually doing something.

Right, read and you might learn something. Canada's economy is outpacing nearly all developed nations and is the only G7 country to not be running deficits, and has done so for over 8 years now, In spite all efforts of the USA trade protectionists. I bet you think free trade has been bad for the USA. lol.

(Together)"Oh Canada, Oh Canada!...."
Draft Dodger 1:'God Save the Queen!'
Draft Dodger 2:"Yeah, we love her! She kept our boys our of Chile!"
---Old Doonesbury cartoon

"Canada lives off of the goodwill of the American people."

That's it, we're cutting off your oil. You *do* realize we're your number 2 provider of it (occasionally your number 1 provider).

Plus all of your net natural gas imports come from us, and almost all of your electricity imports.

We even buy your crappy cars. Now *there's* goodwill.

Statements of a country's national economic growth is only the big leagues of book cooking.

>We even buy your crappy cars. Now *there's* goodwill.

As opposed to those great Canadian cars?

Just remember - we can invade at anytime.

well, GM's largest facility is in Oshawa Ontario, making the truly awful Impala among others.

Does anyone here know that Ontario manufactured more vehicles than Michigan for the first time in 2004?

it's just too bad that Canadian economic growth comes at the expense of us plebs, fattening the governments' pockets. Why do you think we run such a huge surplus? **sigh**

Invade Canada? It is not worth it. There have been talks off and on in the Congress to annex Canada since the western ranges opened up for exploration. Pretty much the concensus is that it is not worth it. Becides, I would rather see Quebec go independant. That would be a nice one!

The web site listing was misspelled,
it should be:

I thought this one might appeal to you - being Canadian.

Does it have a customized "buzz" too?

How is anyone going to get pa1m* to refurb this unit when it starts to buzz.

I'm happy to see that bidders are taking this auction seriously!

/Now palmified for over 6 years.

Yeah, but I think that's in Canadian dollars. That's like $1.75 in real money, right?

That nearly as much money as M$ has wasted in their WinCE/PPC/WinMobile/whatever division.

Sword cuts both ways, Bubba. Careful you don't get nicked...

What are they doing? Resetting the highest bid every day at midnight? This auction's setup is just asking for trouble. Any nut in a cyber cafe in Timbuktu can bid on this thing.