MobiTV Released for The Treo 650 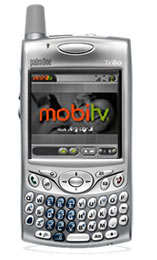 The version of MobiTV for the Treo 650 offers more than 20 channels, including TV channels such as MSNBC, ABC News Now, NBC Mobile, CNBC, FOX Sports, The Discovery Channel, The Learning Channel, The Weather Channel, Comedy Time, and the Major League Baseball Highlight Channel.

There is no demo or trial version at the moment. The program is sold on a subscription basis for $9.99 per month.

MobiTV says they are working to support other Palm devices such as the Treo 600 in the near future.

"There is no demo or trial version at the moment. "...

...Well then - I guess the low-low price of $120 a year to watch such steller programming such as Fox "News" and The Shopping Channel on my Treo is enough incentive to sign up on faith...?

This seems like an interesting concept if they can get some interesting channels and get the price down to maybe $25-50 a year. As I'm not willing to sign up for anything without a demo and/or playing with it live, I can't vouch for the quality except to laugh at the current channels offered - They should pay US to watch them!

You can get basic cable for not much more, so it basically seems like a "cool" app, nowhere near a "killer" app. Seems at that price they'll get a lot of "1 month" subscriptions just to try it and then delete it.

Then again, I'm perpetually shocked when I hear people pay plenty of money to add annoying ringtones to their phones... so what do I know about the "consumer's" mindset when it comes to blowing money...

Your comments are fair, but, damn, I'm getting TV on my cell phone. Perhaps I've behind the times, but that's rather impressive. I've got MobiTV--I get poor reception on my television--and I'm enjoying it. Part of it is novelty, granted, but its quite impressive to be watching TV on the toilet or during a boring meeting.

Let's see... games, the Internet, my photo blog, my dictionary and encyclopedia, my Bible (myBible, in fact), my data, and now my television. What will they think up next?

And to think, less than a decade ago I was impressed by the Palm V.

The quality of MobiTV on the Cingular Wireless Network TREO 650 on the easter part of the United States is great. I am getting STREAMING VIDEO not the traditional slide swhow. I think it is worth it. By April of 2006 they are supposed to have 40 channels. They are trying to work out stuff with movie channels. (TNT, USA, etc...) and also MTV might be joining the MobiTV family followed by ESPN 2, A&E, and National Geographic.
This is not official yet!
My cable bill is much more than 100 a month. Considering I have 5 HDTV Digital DVR boxes. Maybe one day cell phones will have HDTV on them and it will go the speed of atleast DSL!! DREAM DREAM.

This is an artificial market. The signals are allready in the air, the phone just needs a tuner. But the network owners have too much to say in what features phones get, since if phones had tuners people wouldn't go through their net for this...

Yeah, a tuner would be ideal, but I think the problem would be making everyone pay for the extra hardware that not everyone will use. The current MobiTV at least adds no requirements to the hardware other than being connected on a reasonably fast connection. Speaking of which, aren't some Treos on normal GPRS networks? I know MobiTV works at those speeds, but it's considered low bandwidth for this type of content. I really wish they would offer the demo again, or at least expand their device list. They have low end phones on their list, but not some of the better phones... probably going for the popular choices rather than basing it on capability.

Of course, you are talking about adding more hardware to the unit, and that would be a problem for me. I understand, however, that some cell phone space will be dedicated to broadcasts, so perhaps MobiTV will be short-lived.

The best service to use MobiTV with is Cingular Wireless. I have been getting STREAMING Video and not stop slide show video. I am very happy about that. To answer your first question the reason they have either really bad phones or really expensive phones is because they can receive better signal and make a faster connection. I have the Tro650 Cingular and I have very fast connection on it.
Cell phone internet on a GSM GPRS network by Cingular Wireless is faster than 56 Kbps. So you are getting a good bandwith wireless.

Mondo Cool! Give it a shot before you knock it!

I just subscribed to MobiTV and I must admit that I am really impressed. Someone suggested that all you need is a tuner and you could have the same content. That's not the case, however. MobiTV is offering MSNBC, Discovery Channel, Discovery Kids, CNet, a Cartoon Channel, CNBC, the Weather Channel and a number of other premium type channels. It is the equivalent of having cable TV on your phone. And with cable TV prices like they are, $10/mo is very reasonable imho.
I can see this coming in handy for all kinds of occasions. Getting caught in a traffic jam, waiting for a train, waiting at the dr's office, etc. I can envision the toons coming in handy with the kids as well.
I know I probably sound like a hack, but this is the most impressed I've been with a new application on my Treo in a while.

Bought it but may cancel

I bought it to give it a try. It works well but unless you're a sports nut that will eliminate almost half the content.

They really need to get CNN on there, both the regular and Headline News. But I'm sure licensing is a problem. The content on NBC Mobile repeats, MSNBC doesn't give news updates often enough.

RE: Bought it but may cancel

Granted, right now I'm impressed by the novelty of it. But I might also cancel. More importantly, I've recently remembered why I don't have television reception at home: I hate television. Some kind of on-demand might be nice, though. Or, if they'd add channels like the history channel, public television, or a sitcom channel. I find I get most of my use from MobiTV waiting in lines or on the toilet.

RE: Bought it but may cancel

CNN is working out a contract with MobiTV as of September 29, 2005. They are working out a deal to get CNN regular to broadcast over MobiTV. This may take a couple of months. MobiTV tried to get Fox News Channel to go with them but Fox News passed on the offer for right now. If CNN joins the MobiTV family of channels then you should expect many more MobiTV channels due to Time Warner. I have also heard (i do not know if it is true) that MobiTV will be adding Disney Channel and HGTV.

If I were you I would keep the subscription because they might rais the price and if they do then they will have to honor your monthly charge.

I think it is a great start

I just installed MobiTV this weekend and got to enjoy it on the commute this morning. I got better reception of the TV programming on the moving bus than I did when I was standing still in the house.

My ride is about 40 minutes and it is just enough time to enjoy it.

I must say that I am very impressed with the service. The video and audio are both of great quality. There have been a few times when the video pixalated a bit. I have show it to the other Treo owners and there are biting at my heals for information for purchase.

What I would like to see happen?
1. Needs an option to allow the video or screen to blank to save battery - if I am listening to the NFL network channel, sometime I just need to hear it only.
2. Need the ability to see what is coming on or at least what is playing currently. When looking at the guide screen, a little space on the top or bottom could provide a marquee with show info of the channel which is highlighted
3. Show a digital clock where the help button is, so that you can keep track of the time. Make the MobiTV logo on the left the help screen instead.

I spoke about the service on my Podcast yesterday

Type to you later,

RE: I think it is a great start

One thing I'm not seeing anywhere is memory requirements.... Is there an app that need to be downloaded to the Treo, and if so, how much memory does it take?