The end of the year brings about the usual "best of" and "worst of" lists. Venerable print publication Popular Mechanics has chimed in with an unlikely show of support for the now-cancelled Palm Foleo Mobile Companion amidst the potentially misleading title of "The Worst Gadget of 2007".

The Foleo sits atop Popular Mechanics' list of flops, beating out the underwhelming Apple TV, not because of any inherent limitations or design weaknesses. Instead, Popular Mechanics claims that the Foleo was a victim of the intense scrutiny and criticism from the online blogging community. This sentiment is in direct contrast to our earlier piece on the Wall Street Journal article that reports Jon Rubinstein and a small team of executives reviewed Palm's product strategy back in the summer and made the decision to cancel the Foleo before it hit the market. 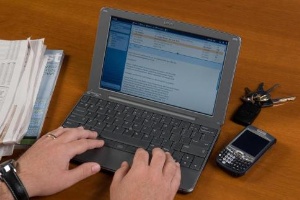 Overall, the Popular Mechanics article, written by Erik Sofge, mostly offers praise for the Foleos lightweight design and long battery life. The staff at Popular Mechanics actually appears to have had a good bit of hands-on time using a Foleo evaluation unit. Mr. Sofge even overlooks the devices main shortcomings such as its lack of YouTube video capability and its lackluster feature set when compared to similar competitors such as the Asus Eee PC, even concluding with the consensus by the PM staff that the "Foleo deserved better".

Dammit, I still want a Foleo!

Me too. Can't wait for Foleo II.

I recently bought (and returned) an ultra-portable PC. I liked it considerably, but for the price, didn't feel I was getting my dollar's worth. Frankly, ultra-portable PCs try to do too much. Something like the Foleo, well-executed, could regain my interest. Still looking for something portable, cheap and more powerful than my Treo.

"I believe in the atomic bomb."

I agree. I was intrigued when it was first announced. I soon became increasingly excited as more details emerged, particularly in regards to third-party app support. Call it a niche product if you like, but the Foleo would have perfectly met my particular needs. I hope the Foleo II truly does come into being.

>>>I recently bought (and returned) an ultra-portable PC.

Which one? The Samsung Q1 Ultra EL. A great machine, really, but not at $800. It really can't function as an entertainment device, so I had to really question why I'm dropping that kind of money on something that really doesn't do more than function as a word processor and Internet device. Seems the Foleo could do just about the same for my purposes.

Now, if Palm wants to step up to the plate, they'd "fix" the Foleo and present something a little more robust, something that completely syncs with ones Treo, etc.

"I believe in the atomic bomb."

That should read: intense scrutiny and criticism from the PalmInfocenter.com community

You don't go anywhere else on the web, huh? It was just about *universally* lambasted. Hell, even I skragged it until it got under my skin.

Give me an Everex Cloudbook or an EeePC with that screen and keyboard and it's all good.

You have a better chance of *that* than an FII.

canceling it was stupid

Ultralight non-Windows laptops are going mainstream, with the Asus and OLPC and a likely upcoming Macbook.

The Foleo probably wouldn't have been a big seller initially, but sticking with it would have allowed Palm to have a good 2nd gen device out by the time these devices take off.

Of course, the company is barely alive right now. But instead of taking risks (Linux-based Palm, Foleo, etc.), they are trying to play it safe (Windows mobile, Centro, etc.). That may allow them to eek out another couple of years, but it's not going to help in the long run. Companies need to take risks if they want to succeed.

Palm had the form factor right. That's about all they did correctly. Under the hood, it was severely underwhelming, and the operating system didn't seem to have enough features.

Hawkins is correct. People are going to be using ultra-light computers more and more. Just not Foleos.

When Palm decides to make this thing a great standalone ultra-portable computer with good networking features is when it will find some success. In its current form, you need a Foleo AND a Treo, which is a small percentage of an already small percentage. If they had let it go, they would have sold a thousand at best.

>>>Under the hood, it was severely underwhelming, and the operating system didn't seem to have enough features.

It was a frikkin *PDA* under the hood (probably a TX rejiggered). They tried to go cheeeep again, the eejits.

That's true - somewhere I read it had the same CPU as one of the Treos or PDAs outta Palm.

I thought I'd be having my own Palm Foleo this year. With what happened, I'll have to wait longer. I hope it will be worth the wait. :)

I will be waiting tooo...

Me too. It would have been perfect for me and my business. Now we just have to hope Palm even survives.

Actually the Foleo can be pretty powerful if you use Remote Desktop to your PC. With WiFi and Edge GPRS, all the power and programs of your home/office computer is available through the Foleo.

For a portable device there isn't really any need for any OS more powerful than that which can provide remote desktoping and a decent browser (which Opera is).

Perhaps to be able to run all the Palm programs also.

I'm waiting for a Foleo too...