Linux Installed on a Treo 650

A few developers have been working on a project to get Linux to load on a Palm Treo 650. They have just announced they are able to get it to boot up the kernel to a command prompt. The project is still in the early stages as there is no working keyboard or phone driver yet. 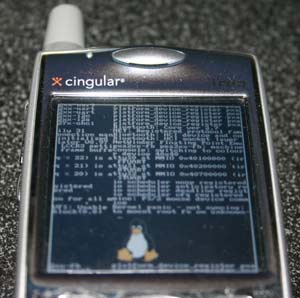 The developer states that he has only been working on this for about a week. Linux starts up and loads to the point where it's ready to start loading initrd and then panics.

What is the real advantage of this - just wondering.

What is the real advantage of this?

No "advantage" I'm sure. The motivation is to find out if you can. Curiosity. It's the human factor that drives most open source development.

By the way, the part about "Linux starts up and loads to the point where it's ready to start loading initrd and then panics" is old: he's got it booting to the command prompt successfully now.

No advantage now, but who knows where this could lead. I think it's the "because we can" factor.

This actually could go somewhere. Take a look at the progress that's been made getting the LifeDrive to run a working Linux-based OS: http://tinyurl.com/aqx63 Looks like the developer just about has GPE running on it (a PDA version of X Windows that looks like this: http://gpe.handhelds.org/screenshots/). He's using a PDA-oriented distro called Familiar that seems to be pretty actively developed right now (http://familiar.handhelds.org) but until recently had mostly been ported to iPaqs.

Cool stuff, and congrats to all these talented and dedicated Linux hackers!

I'm seriously impressed by the pace of the LD Linux work. Now all they need is a POS emulator for Linux and then they would have 30 000 apps too.

With debian on there they'd already have 16000+

Not hard to get debian up on an arm device once it's running a stable kernel. took me, um, 15 minutes to do it on a TI omap device.

I am watching several linux-on-palm projects for about a year now. List of devices in different stages is here: http://www.handhelds.org/moin/moin.cgi/SupportedHandheldSummary

From there you can go to specific models and check current status. Real situation as of today:

TE - only loads kernel so far
TT and TT2 - can load kernel and GPE (graphical environment), touchscreen and MMC (RO only) supported
TT3 - recently loaded GPE, but it is not yet stable. Supports touchscreen
LifeDrive - GPE, touchscreen, MMC

Main problem is with getting datasheets. For example, Alex (LD developer) could start to work on WiFi, but Sychip (manufacturer) does not open info on 6061.

Marty, if you or somebody else will find some time to help, please go to http://www.hackndev.com/ Most of port developers are there.

Anybody who gets that far on any device without access to the hardware specs deserves congratulations.

A Cingular customer service rep probably supplied with that! :-D

Would Palm let Cingular have that level of detail? ;)

They got a LOOOOOONG way to go!

In case any readers aren't aware that Gekko generally has his head up his butt, it's worth pointing out that this isn't true. Even back in May we had demos of Palm OS for Linux running the Cobalt PIM applications on real hardware.

That's still a long way from anything being release-ready, but give credit where it's due.

beersie - that was a simply a fraud - it was effectively a .gif of an artist's rendering of a fictional cobalt/plinux screenshot displayed on a picture viewer on a garnet phone.

oh Beersie - you will be an apologist 'til the bitter end! Which is not that far off, mind you!

Funny how the antagonists pull out the "apologist" line everytime reality smacks em in the face... :)

Sorry, Gekko, but you're wrong on this one. Although I personally had nothing to do with it, I can vouch that what was shown at the developer's conference was real PalmOS code running on top of a real Linux kernel.

Hardware was a Texas Instruments OMAP 730 developer board, called a Perseus 2 (p2). Kernel was Linux 2.6.9. As I've mentioned before, you can download that kernel from muru.com -- where you'll find P2 kernels up through 2.6.15-rc in the git archive.

PalmOS code was a subset of PalmOS 6, modified to replace kernel dependencies with shims that used Linux instead of the PalmOS 6 kernel.

I'm not at liberty to discuss what has gone on since, but the system shown at the developer's conference was definitely beyond getting to a bash prompt.

give credit where it's due.

Not much credit is due to PalmSource. What they showed at DevCon was a Rah! Rah! smoke and mirrors parlor trick designed to pull the wool over the eyes of some naive sheep. It was merely the equivalent of a shaky first step. Unfortunately, the competition consists of world-class marathoners. And PalmSource was still stumbling around in the months after DevCon. Now with the Access deal, PalmLinux will morph into NetFront Linux. Too bad the (glacial) development timeline would have been fatal to Palm sans Microsoft or the Treo.

give criticism where it's due.

Now, now. Be fair. There was no smoke and mirrors involved in the Devcon demo. It was exactly what it claimed to be and the people who gave the demo were scrupulous in describing what had or hadn't been accomplished.

And when it comes to Linux on embedded devices, there really aren't any "marathoners" out there, except maybe Nokia. Just a lot of small players with big dreams.

About glaciers: sure, they move slow, but you don't want to be too close to one when it calfs.

Marty, don't be ridiculous. In this business, delays are often fatal. Cobalt's utter failure and a delayed PalmLinux WILL be fatal to the platform.

You know as well as anyone that PalmLinux will not be delivered on time. Cut the B.S. The platform's fate is sealed.

How to unistall Linux from Palm

I would like to try Garux on my TT2 and I have very important question. Am I going to have any problems with comming back to Palm OS?

Thanks for answers in advance.

No, just reset the PDA and you will go back to PalmOS.

In the future, just go to hackndev.org and ask. I wonder if you will see someone able to provide you with support here.

I thought, that this was better place, for my question.

We are, but remember not everyone here is as linux driven and understands what a BASH prompt is. FWIW asking the devolepers for help first hand is the best way to get support.

What about the TX?

Aren't LifeDrive and TX mostly the same hardware? (without the microhdd parts)
Is anyone working on porting GPE to TX?