Palm has revised the Tungsten E2 handheld's packaging to reflect the company's new name and branding. The muted burguandy coloring and box design of the old PalmOne packaging is gone, having been replaced by a sleek, mostly silver and orange color scheme. The new "Palm" branding is also present on the product packaging. The actual handheld, now visible through the plastic blister packaging, still carries the PalmOne branding, though its silver body seemed a bit darker and less smudge-prone.

Within the updating packaging was the TE2 "Essentials" pack, containing three spare styli, a Palm Slim Leather case and several Palm screen protectors. The bundle's retail price was unchanged from a standard TE2 at $199.99.

These shots were taken through a glass display case at a local Circuit City earlier this week. Apologies for the blurry, dim nature of the pics-they are attributable to the nosy CC sales staff and the Treo 700p's lame low-light camera capabilities.

This rebranding is a rather unusual move by Palm, as other "older but current" products such as the Treo 650 (aside from the Black Tie limited edition) and LifeDrive have not been updated with the new "Palm" branding. Palm also did not rebrand or repackage any old "Palm" products when they became PalmOne in 2004. Such a move looks to be a solid indicator that the T|E2 is going to stay in production for the forseeable future, as Palm usually releases new handhelds in April and October. Palm's website still shows the old TE2 packaging and makes no mention of the new "Essentials" bundle. 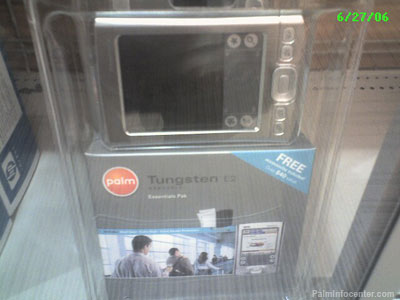 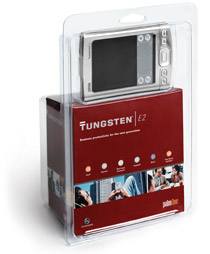 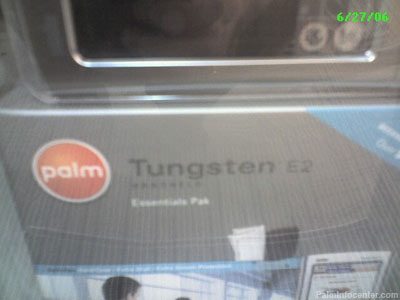 Well the new packaging does look nicer than the old.
But honestly, if these bunch of clowns had spent half as much effort on producing new devices as they have on all their branding and rebranding they may have still been 'in the running'.

I can't help but think that repackaging existing products rather than innovating new ones is rather like rearranging deckchairs on the Titanic.

It's not "doing what needs to be done."

This is not repackaging as if to fool people into purchasing more product, nor is it being done in the place of development as opposed to "doing what needs to be done". It is a company that changed its name, and logo, and the packaging has been updated. I am sure they used up whatever old Palmone branded inventory they had, and moved over to the new branded inventory.

As far as development, it is 100% TReo, there wont be any more handhelds... Thats what "needs to be done."

This aint news. Palm -> PalmOne -> Palm has adopted a non-technological-improvement strategy since releasing the T3 & Treo 600 years ago. Just laern to flow with it guys.

Smoke and mirrors is fun!

My eye sight isn't too good, what does the sticker on the new box labeled Free represent.

As the news item clearly states:

"Within the updating packaging was the TE2 "Essentials" pack, containing three spare styli, a Palm Slim Leather case and several Palm screen protectors. The bundle's retail price was unchanged from a standard TE2 at $199.99."

They claims the extras represent a value of $49.99 which is obviously a very generous retail price valuation. Still, it's a very good price for the bundle as the regular E2 price of ~$200 is still good for solid PDA.

Still palmone on the unit?

One thing I can't understand is why they keep "palmone" in the handheld. Is it that hard to change it? Or have they already built every possible unit that they will sell (just kidding)?

IMHO, all models should have been modified the day after they switched back to "Palm"...

RE: Still palmone on the unit?

I agree, that is rather odd. Esepecially so in light of the "new" 10th anniversary Treo 650 having updated "Palm" branding on its body.

Maybe Palm will drop the essentials bundle and simply reduce the E2's price down to $150 once the last of the PalmOne branded units are gone?

More than anything else I find the lack of updates to the LifeDrive's packaging a sure sign that it's been EOL'd...

RE: Still palmone on the unit?