Palm OS users who run Windows Vista OS have had cause for celebration with last week's release of the beta version of Palm Desktop on Palms website. Now Dataviz, makers of the popular Documents To Go mobile device software suite, have released an updated version of the Palm OS version of their app with full Vista support just as they promised earlier this year. 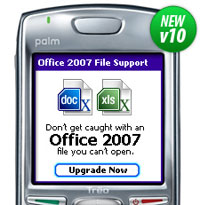 While the initial version 10.00 of Docs To Go Premium released in April 2007 offered compatibility with the new Word and Excel 2007 formats used by Office 2007, actual Vista-compliance hinged upon Palm releasing a public beta of their Desktop software for Vista. In addition to the main addition of Vista Hotsync capability, Dataviz reports that various bug fixes have also been made in the 10.01 version.

I must be dreaming... I don't think I've ever seen such a beast from these folks!

RE: Free update from DataViz?!

The next thing you know, they'll announce that updates are free but you have to pay for the right to download it! Wait a minute....they do that already!!!

I personally wish Palm, Handmark or any customer-friendly firm would just acquire them and squash those hideous nickel & diming policies. This is 2007, not 1997: bandwidth is cheap, there's brutal competition out in the marketplace and customers such as myself have a looong memory when it comes to companies that try to nickel & dime their customers for every little download and re-download.

Those companies who try to brutalize their (oftne loyal) customers at every turn usually end up defunct shortly after they begin to implement such policies. I still vividly recall Umax USA charging for drivers & scanner software that were freely available through their European division's site.

now that Docs To Go works on Vista

can you release the Foleo already??

RE: now that Docs To Go works on Vista

I agree with the other posts--I have Docs to Go but hate the pay-for-incremental improvements deal. And I sure hope it works better on the Foleo (like you, can't wait!) than EVERY other palm I've had. I'm hoping for TealDoc--that's gonna happen you know and it is more stable on the palm side of the equation.

Still no native OpenOffice support, though

It'd be nice if they'd offer support for OpenOffice, instead of saying "save it as an Microsoft Office document first".

When they offer OO support, then I'll get it. Until then, no thanks.

One by one, the penguins are stealing my sanity.

DTG shouldn't even be bundled with Palm devices

Last time I checked DTG Excel didn't support the insertion of numbers because "it is a flaw with the PalmOS" and yet my 2001 version of QuickSheet does. And there is no support for their products, I purchased my Treo 680 bundled with DTG and there was NO support, not 90 days not 30 days. And what the hell is up with no Recalculate command stroke, no Quit command stroke, and not being able to set the Category when saving? Menu+Q is Save in WordTG? and a 72-point font is required for reading. I think their FAQ/"knowledge base" was updated over a decade ago.

There is Russian hacker freeware with better support and interface design.

I'll stick with QuickSheet and WordSmith and making donations to the local retarded children's charity (yep thats what they call it) so that at least some of the "special needs" people in the world will be spared the embarrassment of DataViz employment and lack of productivity for society.