Rumor: Treo fans on the Verizon Wireless network that didnt get their fill of playing the waiting game over the 700p Maintenance Release have occupied the summer months by awaiting the Treo 755p. While Palms newest CDMA Treo has been available to Sprint users since May, Verizons version is still a no-show despite frequent reports (confirmed by this author) that the 700p is suffering from scarce availability system-wide on Verizon. 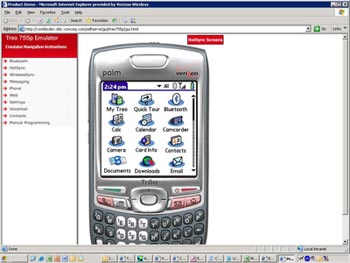 The Verizon 755p was initially rumored to be launched shortly after Sprints version but was then supposedly delayed until July 4th and then again until September.

Now the latest gossip out of the online rumor mill follows last weeks appearance of a legit-looking 755p bearing Verizon branding is that the showroom mock-up units for certain Verizon regions are in stock. Additional reports claim that Verizon employees have completed training on the device. Leaked screenshots from Verizons internal inventory system and their training emulator program appear to back up these latest reports, so a release date within the next month is looking like a distinct possibility.

Young man at Circuit City VZW storein Chattanooga today told me that "no 755 was on the way", and that "It will have a different #". "It will arrive in Q4 and be much different" he said.
Well, throw out the pix boys bc it appears that it's now settled. :-D

Actually, I think he was confusing it with the release of the new XBox 361.

I guess it is something worth hanging onto for a couple of days. Not much cred for CC kids since they hardly know their palm from... well their palm!