NS Basic/Palm allows developers who program with tools such as Visual Basic to use their experience to create applications for handheld devices. It includes features such as databases, net, serial and IR communications, signature capture and more. 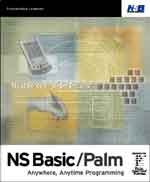 "NS Basic/Palm 6 makes it easier for developers take advantage of the features of Treo devices.", said George Henne, President of NS BASIC Corporation. "Faster compile times and support for Vista make sure that developers can develop even better apps in the future."

The new release also includes PDB Creator Pro, a desktop application that allows you to create, edit and modify NS Basic/Palm databases on the desktop.

Here is some of what has been added in v6.0:

The new version is available now for $149.95 USD for single developers. An Enterprise Edition, allowing unlimited developers at a single location is priced at $449.95. There are no runtime charges for applications created using NS Basic/Palm. Combo packs with NS Basic/CE, allowing development for Pocket PC devices, are also available.

Upgrades for existing users start at $49.95. Registered users who bought after October 1, 2006 will get the upgrade for free. Existing NS Basic programs are upwardly compatible with the new version. The toolkit allows development on Windows 98SE, 2000, XP and Vista. More about NS Basic/Palm NS Basic/Palm allows developers who program with tools such as Visual Basic to use their experience to create applications for handheld devices. NS Basic is a complete, powerful environment enabling the development of applications for the enterprise, business, personal productivity and education. It includes features such as databases, net, serial and IR communications, signature capture and more. Applications developed with NS Basic are distributed royalty free. NS Basic costs $149.95 for a single user. Enterprise licenses are also available. The toolkit allows development on Windows 98SE, 2000, XP and Vista. For more information, see the company's website at: http://www.nsbasic.com/palm/

What would happen before if you ran the IDE in Vista? I'm worried that Vista appears to be breaking things, even though it's still NT.