Palm today announced the Palm Treo 650 smartphone is featured as the technology star in the upcoming Twentieth Century Fox film A Good Year, starring Russell Crowe, directed by Ridley Scott. The Treo smartphone makes its presence known with its signature ring tone and unique messaging and multimedia capabilities that compelled filmmakers to choose it over a separate cell phone, laptop and digital camera. 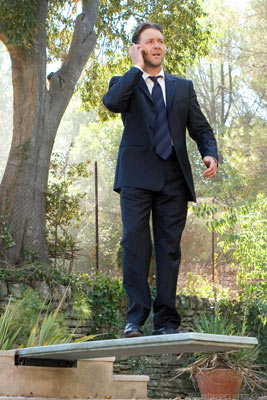 Oscar-winner Russell Crowe reunites with Gladiator director Ridley Scott in A Good Year, a Fox 2000 Pictures presentation of a Scott Free production. London-based investment expert Max Skinner (Crowe) moves to Provence to sell a small vineyard he has inherited from his late uncle. Max reluctantly settles into what ultimately becomes an intoxicating new chapter in his life, as he comes to realize that life is meant to be savored. The film premieres nationwide on Nov. 10.

Palm says the product placement was unpaid. The filmmakers saw the value in using the one device instead of three. Pre-production for the movie had already begun in the Provence region of France when there was a last minute casting call. The production team decided to replace three existing cast members, a cell phone, laptop and digital camera with a single device that possessed capabilities of the other three- a Palm Treo smarthphone.

The Palm Treo smartphone was chosen for its good looks and more. It brings deep communications capabilities, a passion for multimedia and a wide range of applications that would allow Max to do everything from manage his business to choose a great wine, said John Hartnett, senior vice president, global markets, Palm, Inc. Were delighted to see a director of Ridley Scotts caliber recognize the Treo smartphone for its talents as a multifaceted technology star.

The Treo smartphone has been busy this year on the small screen as well, having made television appearances this season on Studio 60, Law & Order: SVU, How I Met Your Mother, CSI: NY, ER, CSI: Miami, The Nine, Ugly Betty, and Boston Legal, among others. Because the range of roles the Treo smartphone can play is so broad and deep, Treos agent Palm does not need to pay for these supporting roles. Rather, Treos commitment to the craft of acting and myriad capabilities relevant on just about any set has earned it organic, integrated roles that add to the characters lives it supports.

RE: Treo Casted in Upcoming Movie

thanks, its featured now :)

RE: Treo Casted in Upcoming Movie

There seem to be more and more TV shows which feature the Treo. Besides the ones mentioned in the writeup, the Treo has been a featured player on 24 since the 270 days. And I don't think that even Russell Crowe and Ridley Scott can top Jack Bauer's use of his Treo to blow crap up.

RE: Treo Becoming a Common Sight on TV

> There seem to be more and more TV shows which feature the Treo...

About mid-way in; what's the device the preacher is holding?

I also remember back when the movie Little Black Book was out Palm did some promo stuff. The movie featured the Palm T|C I believe.

Its also shown on CSI-NY. Used by Garry Senise(not sure of teh spelling).

"Do you know the difference between an error and a mistake? Anyone can make an error, but that error doesn't become a mistake until you refuse to correct it."
-Grand Admiral Thrawn