Pieter Knook, Microsoft's Senior Vice President, Mobile and Embedded Devices division, unofficially announced today that a Windows Mobile 6 upgrade was forthcoming for Palm's Treo 750. The comment was made during a webcast of the Microsoft 3GSM press conference in Barcelona, Spain.

The actual comment regarding the Treo 750 occured between 28:13 and 28:26 of Mr. Knook's talk. The Palm/Treo reference was quite brief and occurred during a rundown of Microsoft's handset partners. Being a very unofficial announcement, no details of the upgrade, such as pricing or availability, was announced. Palm's logo and branding, as well as the actual Treo 750 itself, was prominently displayed throughout the course of the Microsoft presentation. 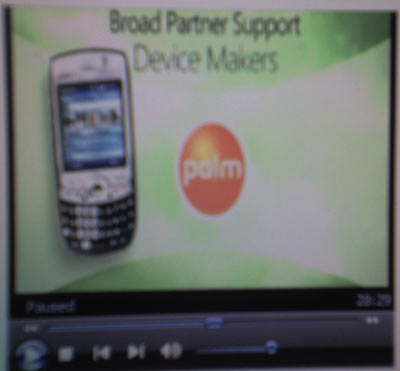 Screengrab from the Microsoft webcast.

Thanks to TreoCentral for the tip.